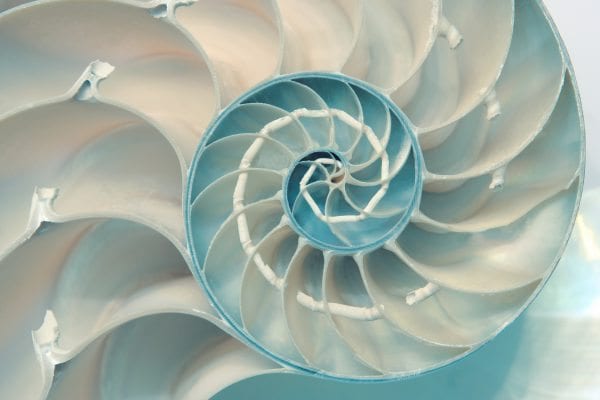 This article is excerpted from Math Matters: Understanding the Math You Teach, Grades K–8, Second Edition by Suzanne H. Chapin and Art Johnson

Fibonacci ratios are comparisons of two Fibonacci numbers, usually adjacent numbers in the sequence. These ratios are often expressed as decimals by dividing one number in the ratio by the other. As the numbers in the Fibonacci sequence increase, the ratios tend to approximate 1.618 (8/5  1.6, 55/34  1.6176, 233/144  1.61805). This special ratio (1.618034 . . . ) is an irrational number that occurs in many other shapes and objects. It is known as  (phi) by mathematicians, and was labeled the golden ratio by the ancient Greeks. (People also call it the golden proportion.) It has been known and used for thousands of years—it is believed that it was a factor in the construction of some of the pyramids in Egypt. Rectangles whose length-to-width ratios approximate the golden ratio are called golden rectangles. Psychologists have found that people prefer golden rectangles to other rectangles; thus common objects such as cereal boxes and picture frames tend to have dimensions with a ratio of around 1.6. Which of the rectangles below do you find to be most aesthetically pleasing? Two are golden rectangles; you can check by measuring the lengths and widths and calculating the ratios.

Try this activity in your classroom!

Fibonacci Numbers and You