Fix It: An Activity for Ordering Fractions 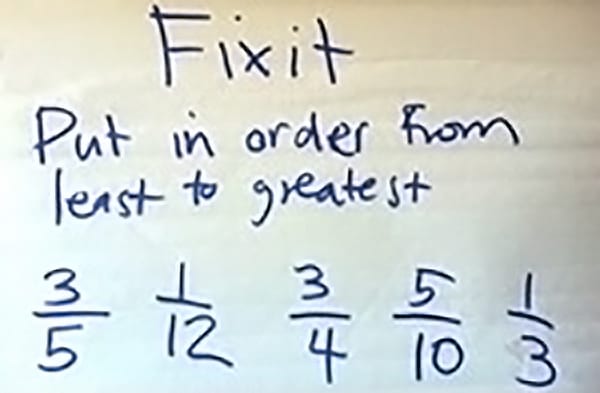 Involving students as creators of problems for others to solve provides an experience for them that’s different from the teacher always being the source of problems.
Also, when students have opportunities to solve their classmates’ problems, I find that they invest in their learning in a different way, often with added interest. And a benefit to teachers is that reviewing the problems that students create is useful for assessing their progress.

Here’s what I did with fifth graders studying fractions.

I wrote five fractions on the board, as shown above, purposely writing them out of order. I told the class, “Your job is to ‘fix’ what I wrote so that the fractions are in order from least to greatest.” Using think/pair/share, I asked students first to think on their own and then to confer with a partner. Next I called on students to share their ideas, each time asking them to explain their thinking. We repeated this for two other sets of fractions.

Then I explained to the students that they were going to create “Fix It” puzzle cards for their classmates to solve. I wrote directions on the board for what they needed to do before making their puzzle card. I explained as I wrote each direction. I modeled on the board how I would follow each direction. First I wrote my name and the title Fix It. I also wrote the number 1 after my name and explained, “That’s in case I decide to make another puzzle card.” Then I wrote five fractions purposely out of order—2/3, 99/100, 1/2, 5/4, 2/5. Underneath, I rewrote the fractions in order from least to greatest. As I thought out loud, I recorded below how I reasoned. (Later Jamie pointed out that I really didn’t write a sentence for 1/2.) Finally I modeled making a puzzle card by copying onto a 4-by-6-inch index card the five fractions out of order from the top of my paper. I explained, “I put my name on the card so that anyone solving it can check the answer by looking at my Fix It explanations. After you’ve chosen your fractions, arranged them in order, and written your explanations, I’ll check your paper. Then I’ll give you a blank card so you can make a Fix It puzzle for others to solve.” I gave one last direction. “When you solve someone else’s puzzle, you copy their fractions out of order, rearrange them underneath in order, and then write your explanations, just as you did for your own fractions.”

The students were interested in the project and began work eagerly. Meanwhile, I set up a folder for their papers so all of their solutions would be easily accessible.

As the class worked, I circulated and observed. When I approved students’ papers, I gave them an index card so they could make their puzzles. I asked those who finished first to exchange puzzle cards to solve, reminding them that they had to write their explanations. “Can you put these fractions in order from least to greatest?” I asked. Fatima nodded that she could and reordered them correctly: 1/8, 1/7, 1/5, 1/4, 1/2. She explained, “The bigger number on the bottom means that the pieces are smaller.” I circled Fatima’s work and labeled it Fatima #1. My time with Fatima gave me information about what she understood so far. I relied on my long-time favorite—Fraction Kits—to help her move forward.

Solving “Fix It” puzzles became a choice on the math menu for fractions, and students solved each other’s puzzles over the next week.

I taught this lesson last spring in Sara Liebert’s fifth grade class in John Muir Elementary School in San Francisco. “Fix It” appears in the Do The Math intervention program, Fractions, Module B, Lesson 28. My colleague, Lynne Zolli, gave me the idea of having students make puzzle cards for the Fix It activity.