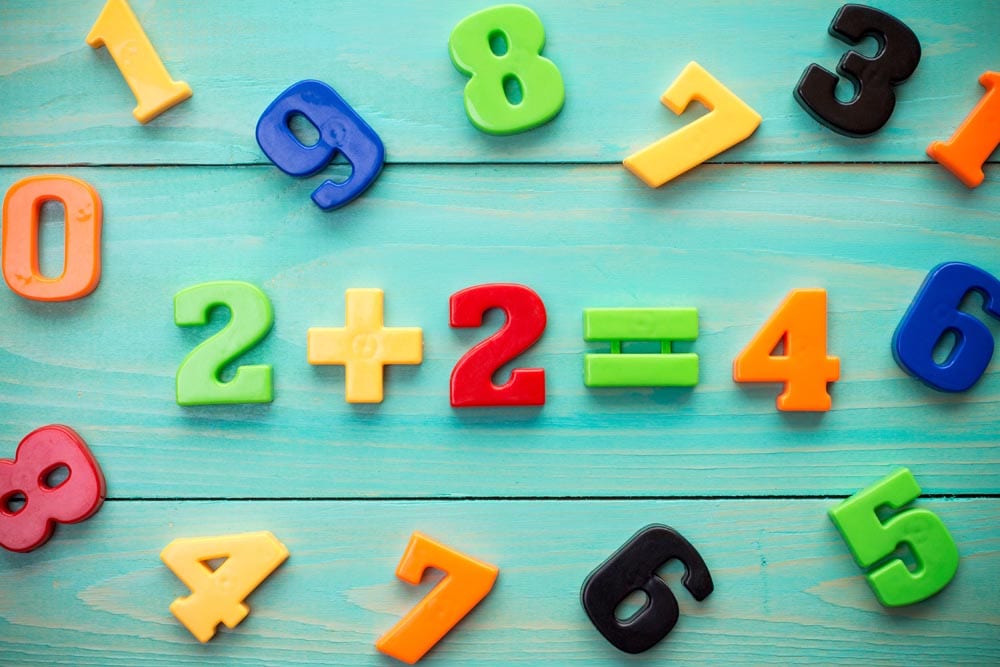 The lesson is excerpted from Minilessons for Math Practice, Grades K–2, by Rusty Bresser and Caren Holtzman (Math Solutions Publications, 2006). The book provides engaging, quick activities to help students practice math concepts, skills, and processes in a variety of problem-solving contexts throughout the day. This sample offers two versions of an activity that focuses students on breaking numbers apart (decomposing), one version for kindergarten and first-grade students and another for second graders. The activity gives students an opportunity to reason numerically, write addition equations, and, for the second graders, recognize the relationship between addition and multiplication.

From a Kindergarten and First-Grade Classroom

After asking the students to come join me in a circle on the rug, I wrote the number 10 at the top of a piece of chart paper. Next I distributed interlocking cubes by carefully pouring them out near the students so that each child had access to them. I directed the students to each count out ten cubes and snap them together to make a train. After they had done this, I had them compare their trains with a student sitting next to them to be sure they were the same length.

“Now I want you to break apart your train in one place, so that you have two trains,” I told the class. I held up a train of ten cubes that I had made and showed the students a couple of different ways they could break it apart. “Hold one part in each hand,” I told them. After giving the students a few seconds to work, I brought them to attention and then called on Carlos to describe his train.

“I have two trains,” Carlos began. “One train has four cubes and the other has six.”

I quickly drew a sketch of Carlos’s trains on the class chart and wrote a corresponding number sentence underneath.

I continued in this way for each student who reported, drawing a sketch of the trains on the board, writing an accompanying number sentence, and then reading the equation aloud with the students. At one point in the lesson, the chart paper looked like this:“Carlos has four cubes here,” I said to the class, pointing to my sketch of the train with four cubes and to the number 4 in the number sentence 4 + 6 = 10. “And he has six cubes here.” I pointed to the train with six cubes on the board and the 6 in the number sentence. “That makes ten cubes in all.” Then I read the equation aloud, again pointing as I did so, “Four plus six equals ten.”

I purposely alternated between writing the 10 at the end of the equation after the equals sign (4 + 6 = 10) and writing it to start the equation (10 = 2 + 8). It’s important for children to become flexible in seeing number sentences written both ways. Too often, children think the equals sign means “the answer is coming” and that a number sentence is wrong if it starts with the sum.

By the end of the activity, the chart was filled with combinations of two addends of ten. Over the first few months of school, I varied the activity in several ways. Sometimes I had the children break their train of ten cubes into three or four different trains so that they had experience seeing ten as the sum of three or four addends—for example, 1 + 3 + 6 = 10 and 2 + 3 + 1 + 4 = 10. Sometimes I had them start with trains of numbers less than ten to give them experience with the addends of those numbers. For each, I recorded on chart paper, and I displayed the class charts in the room for students to reference.

From a Second-Grade Classroom

These second graders also began the year by breaking apart numbers less than ten. At first, I had them use interlocking cubes, as the kindergartners and first graders did, and I recorded on chart paper. Then, when I wanted to push them to think about numbers in their heads, and I felt they were ready, we did the activity without cubes.

As the students became more comfortable, I began to use the calendar to determine which number the students would think about. On May 24, for example, I gathered the students on the rug and asked, “In what ways can you break apart the number twenty-four? Think about this by yourself and then I’ll ask you to share your thoughts with a partner.” After I gave them about thirty seconds to think and share with a partner, I called on Rosa.

“You could do ten plus ten plus four,” Rosa said.

I recorded Rosa’s idea on the board and then invited the students to read the equation aloud with me as I pointed to it:

Tim reported next. “How about ten times two plus four?” he said. Tim was a student who came to school with a strong sense of number and operations. He was one of the “experts” that we all learned from. I added his idea to the chart and we read it aloud together:

“Does anyone know why I put these parentheses around ten times two?” I asked, pointing to the equation and using my fingers to show what I meant by parentheses. The children looked puzzled.

“Writing an equation is sort of like writing a sentence using numbers rather than words,” I explained. “If I use a comma in a sentence, it tells the reader to pause. If I put a period at the end of a sentence, what does it tell the reader to do?”

“That’s right,” I said. “It’s the same with a number sentence. I wrote parentheses around ten times two in Tim’s number sentence because I want to be sure that we multiply ten times two first and then add the four. Sometimes it matters which numbers you work with first.” In this number sentence, the parentheses aren’t really necessary since the order of operations states that we always multiply before adding. However, it’s fine to include them, and taking this opportunity to do so allowed me to introduce the students to the convention of how we use parentheses as mathematical punctuation.

After we read Danielle’s equation aloud, I asked, “How can we use multiplication to write an equation that uses Danielle’s idea?” I gave a hint: “How many times did Danielle tell me to write the number five?”

“Four times,” Toby replied. “Oh, I know! Five times four. It’s like the number five, four times!” I wrote on the board:

“You have to add the four,” Danielle said.

“Like this?” I asked as I added her idea to the number sentence:

“You need to put those marks around five times four,” Keisha directed.

“You mean put parentheses around five times four?” I asked, fixing the equation.

We read the equation aloud and I again asked, “How about another way to break apart the number twenty-four?” I called on Shannon.

“Yes, twenty-four is also made up of twenty-four ones,” I confirmed as I wrote the long equation on the chart and we read it aloud.

I continued in this way until no one else had an idea. Then I suggested one myself, something I often will do to stretch students’ thinking. I wrote this equation on the chart:

“What do you notice about my number sentence?” I asked the class. “It’s the same as Tim’s!” Charlotte exclaimed.

“Well, five times two is the same thing as ten, and you do it two times, then add four,” she explained.