A Lesson for Seventh and Eighth Graders

In Writing in Math Class: A Resource for Grades 2–8, Marilyn Burns presents an activity Cathy Humphreys taught in her seventh- and eighth-grade math class. The students were learning about percents, and Cathy wanted to assess their ability to use percents in a problem-solving situation. She presented them with a problem created by Lynne Alper. 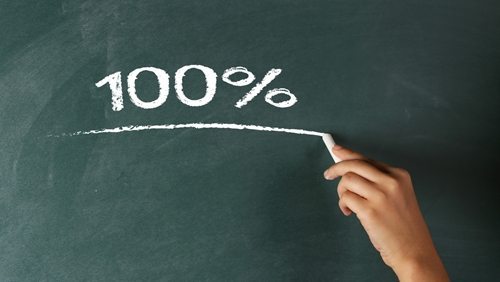 Cathy wrote the following problem on the board:

A school has 500 students. If a school bus holds 75 students, is there enough room on one bus for all of the school’s left-handed students?

Cathy ﬁrst had the students report on a class graph whether they were right-handed or left-handed. They analyzed the data and compared them to the information Cathy had researched that 12 to 12 1/2 percent of Americans are left-handed. The students then tackled the problem, working in pairs. Listening as partners discussed the problem provided Cathy with some information about the students’ perceptions. Reading the students’ solutions contributed further to Cathy’s assessment of their understanding and confusion.

Several pairs of students multiplied to solve the problem. Liz and Audry wrote: To get the answer we multiplied 500 students by 12% and got 60 people and the bus can hold 75 people so there is enough room.

Khalil and Gina took a different approach: We think you can because 75 is 15% of 500. We only have to put 12% one of the left-handed people.

Right answers alone can hide a lack of understanding. No matter the method they chose, all of the students arrived at the correct answer that there was enough room for all the left-handed students. If the students had reported only answers, Cathy might not have learned about some of the students’ confusion. Their written responses served to alert Cathy to some conceptual misunderstandings.

For example, some groups tried using division. Jon and Phil divided 12 into 500 and wrote: 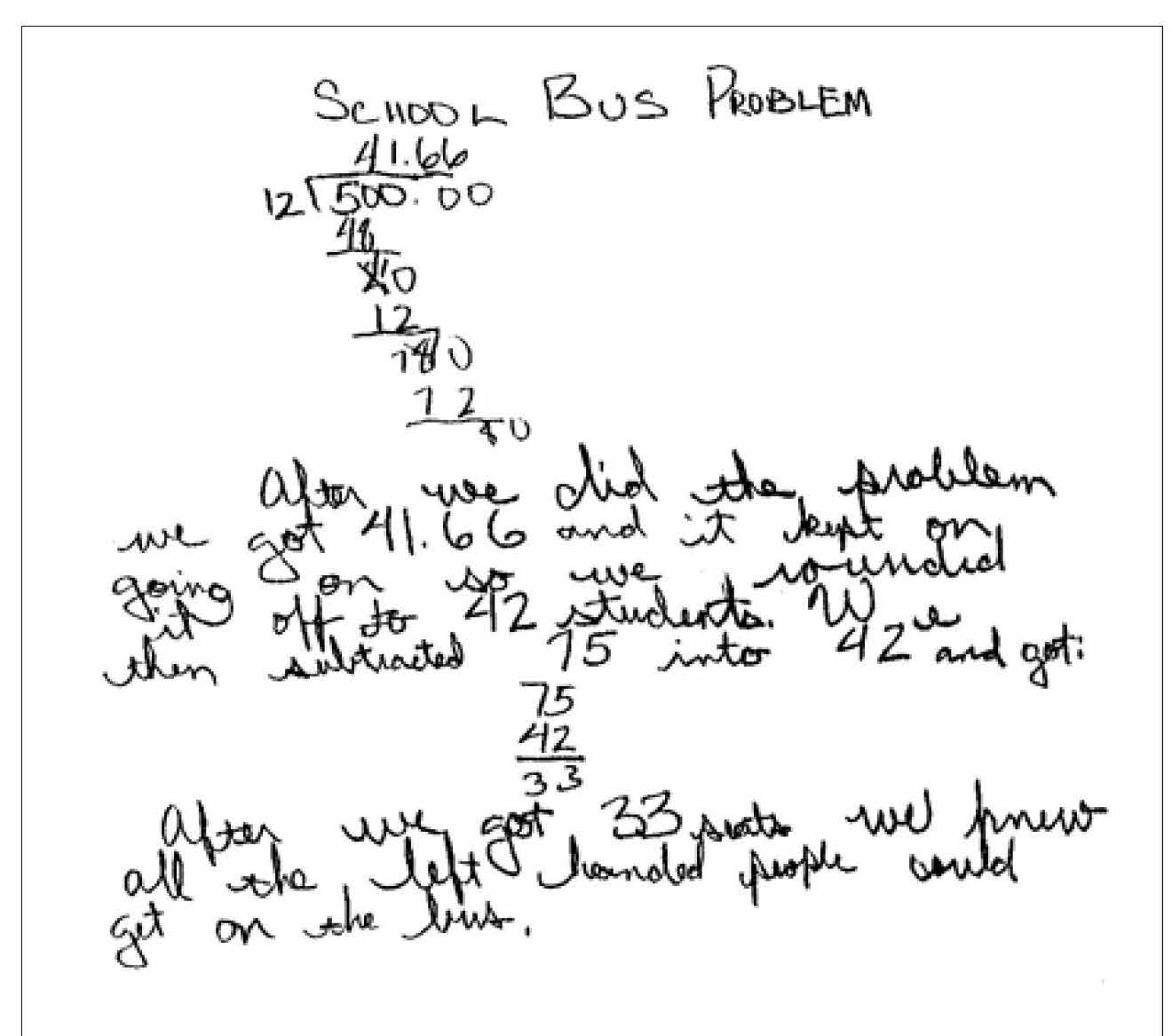 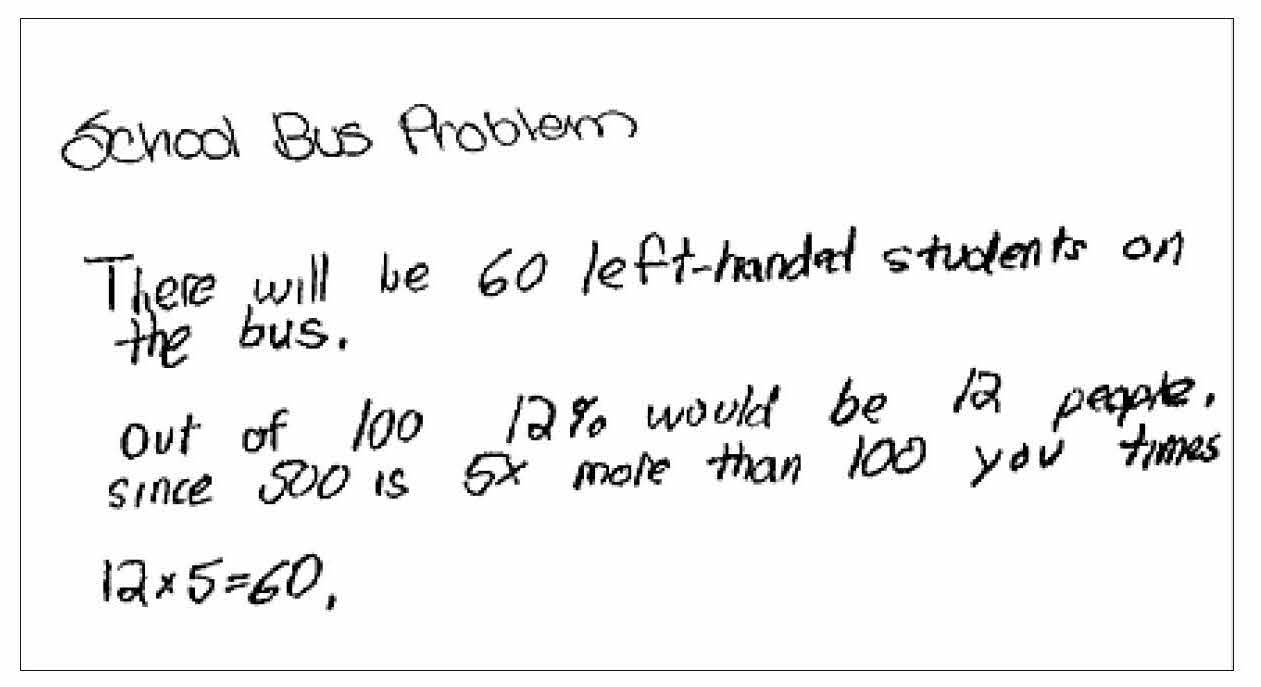 Cathy followed this assessment with an individual writing assignment titled “What I Know About Percents (So Far).” She told the students that their writing would help her learn what they understood and therefore help her plan more effectively for their continued learning. A writing assignment such as this gives value to students’ thoughts and involves students in reﬂecting on their own learning processes.

“Should we tell how we solve problems?” Nam asked.

“If that will give me information about your thinking and understanding, then it would be helpful,” Cathy answered. “The more information you give, the better.”

In their papers, the students included information about what percents are, situations in which percents are used, and ways to represent percents. Darshana, for example, wrote: I know that percent is used for many things. It is used for grading, weather, tipping, and surveying. I learned how to Estimate more accurately. I also learned that 100 is the main factor in percents. That means a pie is 100% or, 2% means .02 hundredths. Fractions are related to percents. That means 1/2 is also 50%. Some good ways to ﬁgure out percents are paper and pencil, calculators, and your mind.

Stephanie wrote about her confusion: So far all I know about percent is that it is very confusing! I think I understand how to solve a percent problem but since we didn’t do percents last year this is my ﬁrst time doing percents I am easily confused when a new way to solve a problem pops out at me. Here is an example of what I think when you ask what 20% means to me. Well if you take a dollar you know that there are 100 pennies in that dollar. And when you have that 100% that means that each penny stands for 1% so 20% of a dollar is 20 cents.

From reading the students’ papers, Cathy learned about the range of their understanding and their levels of conﬁdence. The papers also provided some speciﬁc directions for further instruction. The references to the possible maximum size of percents were an indication that this issue needed attention in class. Also, the frequent mention of money was evidence of its usefulness for helping students think about percents.

Related Publication:
Writing in Math Class: A Resource for Grades 2–8
by Marilyn Burns