A Lesson for Kindergartene, First, and Second Grade 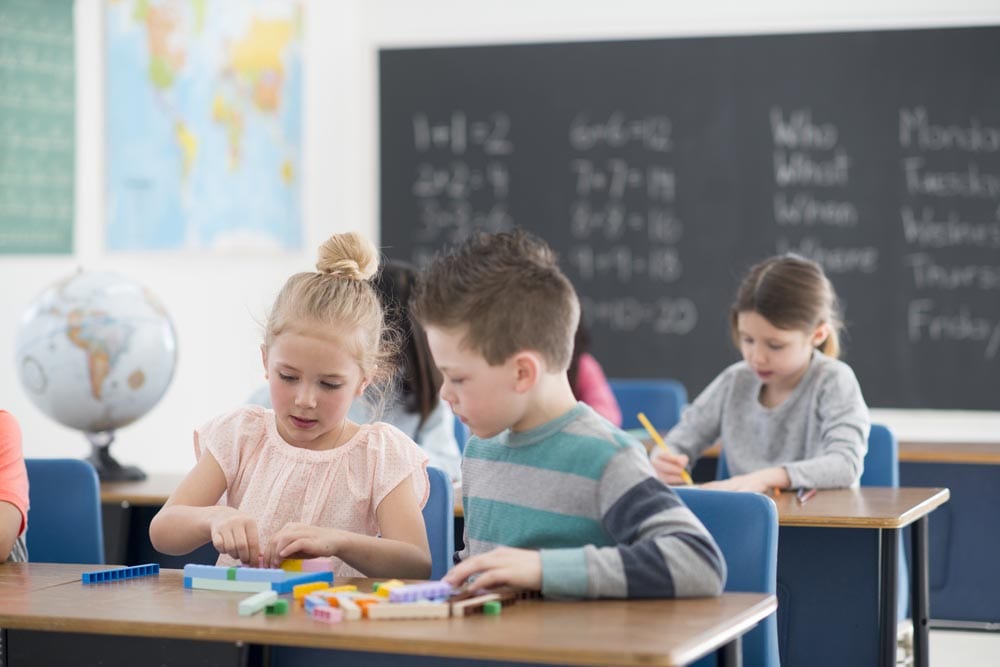 In this activity, students guess a secret number from within a range of numbers and keep refining their guesses based on whether the teacher tells them the secret number is greater or lesser than their guesses. Guess My Number, which appears in Rusty Bresser and Caren Holtzman’s Minilessons for Math Practice, Grades K–2 (Math Solutions Publications, 2006), helps develop students’ number sense as they gain an understanding of the relative position and magnitude of whole numbers.

From a Kindergarten Classroom

Kimberly Sharman’s kindergartners filed in from recess and sat on the carpet at the front of the room. Her students were all English language learners; Spanish was their native language.

“Today we’re going to play a guessing game,” I began. “But before we play, we’re going to warm up our brains and think about numbers.” When I gave these directions, I was careful to speak slowly, enunciate each word clearly, and use gestures whenever possible. All of these techniques can help English language learners as they learn academic content in a second language.

To give the students practice identifying numbers and quantities, I held up five fingers and asked the class, “How many fingers am I holding up?”

“Five!” the students answered in unison. I then held up three fingers, then ten, and then two. Each time everyone seemed to instantly know how many fingers I was showing. Next, I held up seven fingers.

“Now how many?” I asked. This time, the students seemed a little hesitant. Many students said seven, some said six, and a few thought I was holding up eight fingers. Ana volunteered to come up and stand beside me to show and tell us what she thought.

“I think there are seven fingers,” she said.

“How do you know there are seven?” I asked. Ana did not respond to my question. She just stood there, staring at my fingers.

“Ana, you can count them!” a boy on the rug suggested.

Ana took the boy’s suggestion and counted my raised fingers. “One, two, three, four, . . . ,” she counted, all the way to seven.

Next, I drew a line on the board and recorded the numbers 0 to 10 above it, directing the students to count aloud with me. I wrote the numbers far enough apart so that there was room to post a sticky note underneath each.

I then pointed to the number 4 and asked the students to tell me the name of that number and to show me the amount with their fingers. This allowed me to informally assess students’ ability to identify numbers by their names and the quantities they represented. After the number 4, I continued pointing to a variety of numbers on the number line before introducing Guess My Number.

“OK, now that we’ve warmed up our brains, we’re going to play a guessing game,” I told the class. “I’m going to think of a number and you’re going to try to guess what it is. Ready?”

I squinted my eyes and touched my index finger to my forehead, giving the impression that I was thinking of a number.

“I’ve got it now!” I said. “I’m thinking of a number that’s on our number line. It could be zero, one, two, all the way up to ten. Raise your hand if you have a guess.”

The students were very excited to guess. I waited several seconds to give them think time; then I called on David, who guessed ten. My secret number was eight, so I placed a sticky note with a left-facing arrow drawn on it under David’s guess to give the class a clue:

“My number is less than ten,” I told the class, pointing to the arrow on the sticky note and gesturing to all the numbers below 10. “Who has another guess?”

Daniela guessed the number two, so I placed another sticky note, with a right-facing arrow drawn on it, underneath her guess:

“My number is between two and ten,” I told the class. “It’s less than ten and greater than two.” I used my finger to sweep across the numbers between 2 and 10 and said, “My number is one of these numbers.”

Adriana guessed six, so I moved the left sticky note from the 2 to the 6:

Now the students were very excited and I had to remind them to raise their hands to make a guess. Because it was so difficult for the students to contain themselves, I directed them to whisper their guesses to a neighbor. Then I took Martin’s guess, which was nine. I moved the right sticky note from 10 and placed it underneath Martin’s guess:

“Which numbers are good guesses now?” I asked. The students were eager to guess my secret number. They all seemed to know that they had narrowed it down to two possibilities: seven or eight. We ended the game when Victor correctly guessed my number.

From a Second-Grade Classroom

As Robin Gordon’s second graders watched, I quickly drew a line on the board with 0 above it at the left end and 50 above it on the right end. I also wrote an X above the line, eyeballing where my secret number, 19, might be.

“I’m thinking of a number and my number is where the X is on this number line,” I told the class. “Is my number less or greater than fifty?”

“Less!” answered the students. This seemed pretty obvious to them. I then asked, “Is my number less or greater than ten?”

“It’s closer to ten, because ten is close to zero and far away from fifty,” River observed. Next, I located the number 10 on the number line:

“Now that you know where ten is on the number line, talk with a partner and try to guess my number,” I told the class. As partners discussed, I quickly circulated, listening to students and making sure that everyone was focused. Then I asked for the group’s attention and called on Tanisha.

“I think your number is fifteen, ’cause it’s close to ten.”

“I think it’s bigger than fifteen, maybe sixteen or seventeen,” Carlos said. “Where would twenty-five go?” I asked the class.

“It’s right in the middle of the number line, ’cause twenty-five plus twenty-five is fifty,” Beta explained.

“Does everyone agree with Beta? Does that make sense?” I asked. Students nodded their agreement and I wrote the number 25 halfway between the 0 and the 50 on the number line:

“Now what do you know about my number?” I asked. “It’s between ten and twenty-five,” Tana said.

“In a whisper voice, tell me what you think my number is,” I directed. I listened carefully to students’ guesses to check for reasonableness. The guesses I heard ranged from fourteen to twenty. Finally, I revealed my secret number to the class, which was nineteen.

When I repeated this activity on subsequent occasions, I varied it, sometimes writing 0 and 100 on each end of the line and then locating an X. Also, I sometimes gave clues to give the students practice with other ideas as well, varying their difficulty according to the students’ abilities: My secret number is an odd number. My secret number is an even number. The number ends with a zero. You can land on the number when you count by twos, fives, or tens.