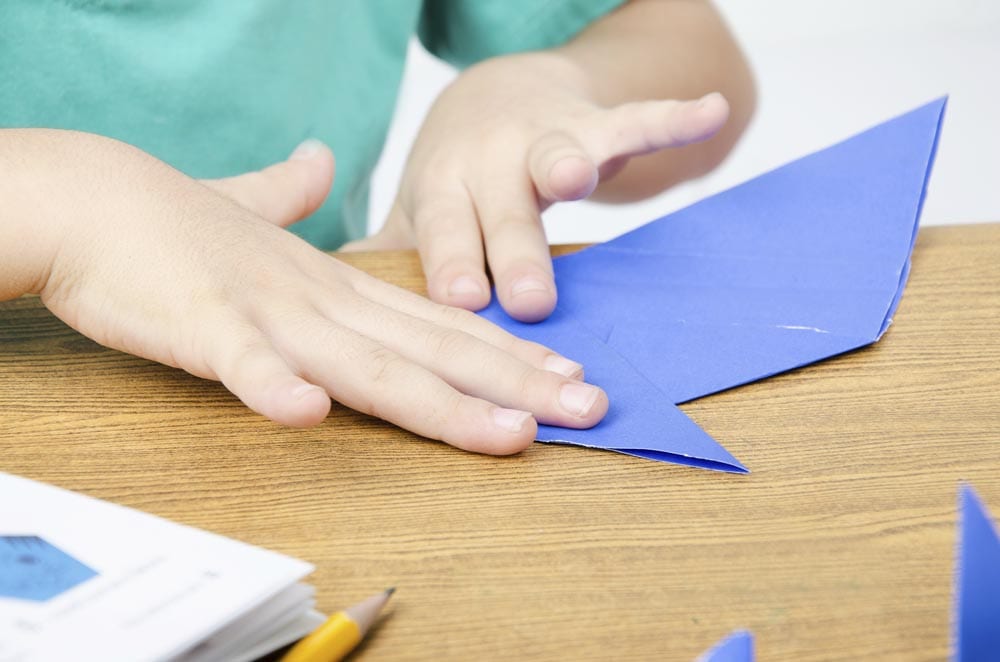 A Lesson for First and Second Graders

This whole-class lesson is adapted from the Math By All Means replacement unit Geometry, Grades 1–2, written by Chris Confer. By folding a square of paper in several predetermined ways, children investigate and record the different shapes they can make. This activity gives children valuable experience with learning about how shapes relate to one another.

To prepare for the lesson, Chris cut squares from copier paper for the children. (The squares were about 4 inches on a side.) Chris also had ready one 12-by-18-inch sheet of newsprint for every pair of children and a large sheet of chart paper to use for tracing shapes for a class record.

After giving each child a square, Chris said, “Watch closely and fold your paper just like I fold mine.”

Chris folded her square in half to make a rectangle. When the children had folded their papers, she had them count to verify that there were four sides and four corners. “What shape is it?” she asked. (See figure 1.)

Most of the children answered, “Rectangle.”

Chris unfolded the rectangle, refolded it in the other direction, and had the children do the same.

“Watch first as I fold two corners down the way we do when we make a paper airplane,” Chris said. (See figure 2.)

After the class had folded their papers and counted the sides and corners, Chris explained, “When a shape has five sides and five corners, it’s called a pentagon.” She asked the children to say “pentagon” aloud softly. Then she told them to wiggle the new folds back and forth a few times.

Chris then showed how to fold down the remaining two corners to make a square that was smaller than the original one, but the children had their own ideas. “It’s a kite!” “It’s a dia- mond.” (See figure 3.)

Chris rotated her folded square so one side was parallel to the floor. “What is this shape?” she asked.

“It’s a square,” the students responded. “But I know it’s a diamond,” Steve insisted.

“This shape may look like a kite or a diamond when I hold it like this,” Chris explained, rotat- ing the shape so a corner was up. “But it’s still a square no matter how it’s turned.”

Then Chris introduced the exploration. “Today we’re going to investigate the shapes you can make by folding your paper different ways. The rule is: You can fold your paper on one, two, or more folds, but only on the folds we’ve already made. You can’t make any new folds. Trace the different shapes you find. You’ll work with a partner, tracing your shapes on the same sheet of newsprint.”

As Chris distributed a sheet of 12-by-18-inch newsprint to each pair of students, she asked, “How many shapes do you think you’ll find?”

Children’s estimates ranged from two to ten. (There are actually nine different shapes, if you count the original square; see the diagram below, figure 4.)

Chris circulated as children began folding their papers and tracing the shapes they found.

Danny asked, “Can we write something in the middle?” He pointed to the pentagon he had traced.

“Superman,” he answered. The shape reminded Danny of the symbol on Superman’s shirt.

Other children chose to decorate their shapes. Pentagons sprouted chimneys and bricks, and trapezoids grew wheels and exhaust pipes as the children related the shapes to familiar objects.

Gabriel and Stacy were hard at work and had already traced six different shapes. “Look! I did a pentagon,” Stacy said, trying out a new word. “And upside down it looks like a cat,” she added.

Adrian was also hard at work tracing his first shape. While children’s abilities vary widely, each child can be successful with this shape investigation.

“Can I do this one?” Danny asked, showing Chris a skinny pentagon.

“Is it different from the shapes you’ve found so far?” she asked. Chris and Danny looked at the shapes he had traced.

“Yes,” Danny answered, demonstrating how he had produced two different pentagons by folding his square differently.

Josie and Francisca had traced two identical squares on their paper. Chris said to them, “It looks to me that you have drawn the same shape on your paper two times.”

“But we made one a square and the other a diamond,” Francisca said.

“They look the same to me,” Chris said. “They seem to be the same size and shape, but this one is turned,” Chris pointed to the diamond. The girls nodded and began erasing one of the shapes.

Steve and Javier seemed to be finished. “How many different shapes did you find?” Chris asked.

“Six,” answered Steve. “That’s how many there are.” Steve had initially predicted there would be six different shapes.

“How do you know there are only six?” Chris asked.

Steve shrugged. “We looked and we looked, and that’s how many we found,” he said. But Javier then found a new shape. He showed Steve how to fold all the flaps except one to get a pentagon. (See figure 5.)

Figure 5. Steve and Javier traced and labeled all nine shapes.

After the children had had time to work on the activity, Chris began a class discussion. “Who would like to come up and trace a shape?” she asked, posting chart paper. Many children raised their hand, eager to participate.

Javier brought his folded hexagon to the chart and carefully drew around it with a marker. Chris and the children counted the sides and corners together. “It’s a diamond!” “It’s a hexagon!” “It’s a trapezoid!” the children called out.

“A shape with six sides and six corners is called a hexagon,” Chris said and labeled the figure. Chris held up one of the yellow hexagons from the Pattern Blocks for comparison. The children noticed that although their hexagon also had six sides, it was longer, skinnier, and more like a diamond. The Pattern Block hexagon was fatter and more like a circle, some said.

Adrian then showed the class a pentagon. No one remembered the word. Francisca came close. “Pen . . . pen . . .”

“It’s a pentagon,” Chris said. It takes many experiences over time for children to learn new terminology and become comfortable using it.

The class continued tracing shapes, labeling them, and counting the sides and corners. Gabriel pointed to a pentagon and said, “It looks like the face of a clown! Here’s the hair.” Adrian called the trapezoid a shoe. Marcos thought his folded square opened like an envelope. “Look, it’s a letter,” he said.

Chris then told the children that for homework they were to take home their squares and work with their families to find all the shapes. Chris knew that the children would benefit from doing the activity again, and would enjoy doing so. Also, it was an opportunity for them to show their parents the geometry they were learning at school.