A Lesson with Fourth Graders 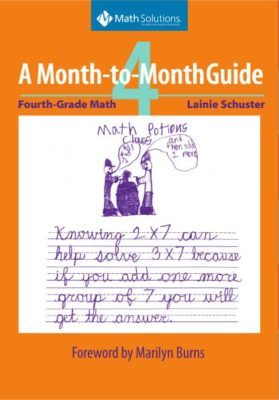 In this lesson, excerpted from A Month-to-Month Guide: Fourth-Grade Math (Math Solutions,2009), Lainie Schuster has her fourth graders start the school year with an investigation that offers them the opportunity to work in pairs to collect, represent, and analyze data. She uses the children’s book Martha Blah Blah, by Susan Meddaugh (Houghton Mifflin Company, 1996), as a springboard for the lesson. In this book, Martha, a dog who is able to talk as a result of eating a bowl of alphabet soup each day, finds herself in a pickle when the owner of the soup company reduces the number of letters in each can of alphabet soup. Fourth graders are tickled by Martha’s amusing but unintelligible speech as a result of the missing letters and are delighted when Martha takes it upon herself to solve the problem of the missing letters.

After listening to the story, students pair up to investigate the frequency with which each letter in the English alphabet is used. They gather and organize their information, then summarize in writing what they notice about the letter frequencies. They create posters to show their findings and participate in whole-class discussions to share their thinking. To extend the activity, Lainie gives students pasta letters from which they form as many words as possible.

I began the lesson with a read-aloud of Martha Blah Blah. Following the reading, we had a class discussion about letter distribution in words. I asked the class, “What letters do you suppose occur most frequently in the English language? Why might that be? Do you think consonants are used more than vowels or vowels more than consonants?”

When everyone had had a chance to offer an opinion, I posed these questions: “How could we investigate the frequency of the letters we use? How could we collect the data? How could we chart the collected data? If Granny Flo, the owner of the soup company, was determined to eliminate the least-used letters from her soup, how could we help her make an informed decision (at least for talking dogs)?”

I directed the children to discuss these questions with their neighbor and come up with ideas for carrying out a letter-frequency investigation. As the children talked, I circulated around the room, listening and handing out a record sheet containing writing prompts. (See end of lesson for blackline master.)

When I felt everyone was ready, I called the class back together so students could share their ideas and discuss the writing assignment. Because I wasn’t sure how much experience my students had had in data collection or working cooperatively, I felt it was important to have this discussion.

Several students said, “Count the letters on a page in our math book.”

Others said, “Pick several sentences or a paragraph and see what letters are used and how often.”

Still others offered, “One person can read the words while the other tallies the letters and we can take turns after each sentence.”

I then inquired, “How might you chart the letter frequencies?” Almost everyone suggested that all the letters of the alphabet be written in a two-column chart with the letters in the left column and the distribution tallied in the right one. In response, I asked the children if it was necessary to write down all the letters in the alphabet or if they could write down just the ones that were in their reading selection. This led to a rich discussion about the importance of being able to quickly assess the holes in the collected data.

Then I described the task. I explained that, working in pairs, they were going to determine how often each letter of the alphabet was used. “To do this,” I further explained, “you and your partner are to choose any book you like, select a short paragraph in that book, and analyze the frequencies of the letters used in that paragraph.”

I gave each pair a piece of newsprint on which to record all their work. I told them to post the data they collected in whatever format they were comfortable with and to leave room on their newsprint for writing summary statements and posting the results of another task, which I would give them the next day. I also told them that they would have an opportunity to decorate their posters at the end of the investigation.

Once we agreed on what they were being asked to do, the children set off to collect and represent their data. Many chose a paragraph from a book they were presently reading. Others picked one of the books in the classroom book display. I had asked that the paragraphs be relatively short because it was the beginning of the school year, and I was more concerned about the manageability of the task than the length of the paragraph.

Before all the students were finished collecting their data, I asked for their attention, and we discussed the written part of the task. I asked the children to write two summary statements on their sheet of newsprint. I explained that a summary statement should explain what they noticed about the data they had collected. I suggested they ask themselves questions such as,“Is there a pattern of any kind in our data?” “Where are the ‘lumps, bumps, and holes’ in our information?” and “Which letters could Granny Flo eliminate and why?”

I had pairs work together to create summary statements but asked them to individually complete the writing prompts before discussing and comparing their opinions and answers.

As the children went back to work, I circulated around the room to offer assistance. Talking about the mathematics is one thing—writing about it can be quite another. I pushed students to use “because” statements as they wrote: “I would remove these letters because . . .”

Sometimes it was necessary to remind students to refer to their collected data as they wrote. (See Figure 1.)

Since math time was almost over, I continued the lesson the next day. After students retrieved their newsprint, we began a class discussion of their findings and decisions. Most agreed that more consonants should be removed than vowels. As the children shared their findings, I asked questions such as, “Why do you think so?” and “On what are you basing your statement?” This helped them focus on the data in their charts and better articulate he “mathematical proof” on which their opinions were based.

I concluded this investigation with a word search made from a cupful of alphabet pasta. I gave each pair of students a paper cup containing twenty-five pieces of uncooked alphabet pasta. I then gave the following directions:

Interest remained high for weeks, as students looked again and again at their classmates’ work. They were especially curious about the frequency findings, the conclusions that were drawn, and the words that were made from the pasta letters.

Note: For additional activities focusing on Martha’s dilemma, in which students analyze letter frequencies and apply their findings to the game of Boggle, see Math and Literature, Grades 4–6, by Rusty Bresser (Math Solutions Publications, 2004).