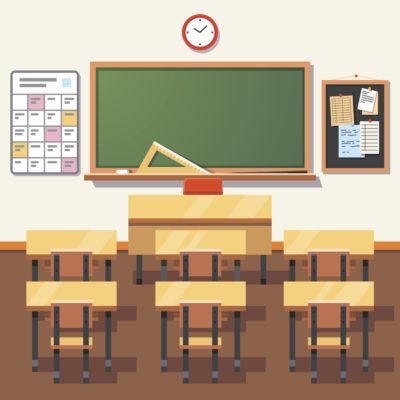 Sara Fanelli’s My Map Book (HarperCollins, 1995) is filled with maps of things that are of importance in a child’s life—“Map of My Day,” “Map of My Neighborhood,” “Map of My Face,” and more. In this lesson, excerpted from Jamee Petersen’s Math and Nonfiction, Grade K–2 (Math Solutions Publications, 2004), second-grade students draw maps of their classroom, which engages them informally with scale and helps develop their spatial awareness.

Before reading My Map Book to a class of second graders, I pulled down the classroom map of the United States and asked, “Why do we need maps?” A few students raised their hands, and I waited for more to do so. I called on Arianna.

“We need maps to tell us where things are,” she said.

“Maps show us which direction to go to get somewhere so we don’t get lost,” Bruce added.

“They’re like a drawing of what’s around you. And they show where you are and what things you are close to,” Shira said.

“So maps help us find our way around,” I summarized. “In this book, you will see some really unusual maps that do exactly that.”

I read the book aloud to the students, being sure to spend enough time on each two-page spread for the children to explore the entire map and all its clever details. On the “Treasure Map,” the students were fascinated by the monster, the two guardians of the treasure, the knights on horseback, and the buildings. This map is followed by the “Map of My Bedroom,” which shows two beds, a desk, a small carpet, slippers, and more. The “Map of My Day” lays out a day from morning to the dreams at night that follow story time. The book presents a unique and unexpected view of the world, and the children were amused and surprised the entire way through.

“Today we are going to create maps of our classroom,” I explained. I showed a few of the pages in the book that would be helpful for the task. First we looked at the “Map of My Bedroom.” Because we have windows along one wall in our classroom, I pointed out how the windows in the book are drawn flat even though real windows go up and have height. I also talked about the different sizes of the furniture in the bedroom. “Which child do you think is younger?” I asked, pointing to the two different-size beds in the illustration. This led to a discussion about furniture size and accurate representation. We talked about how the student desks and chairs in our classroom are the same size and should therefore be the same size on their maps, and about which furniture is larger than the student desks and should be shown larger on their maps.

“Your desk will be bigger,” Nick said, commenting on my teacher desk.

“Yeah, your desk is about two of ours,” Cam responded matter-of-factly.

Jarvis said, “The tables are bigger.”

I turned to the “Map of My Neighborhood” to discuss perspective and the shapes of the objects that would be included on their maps of our classroom. We talked about how the house in the book’s map is shaped like a square and how the playground is an irregular shape with six sides. The children were familiar with the term hexagon for a six-sided shape. “How many sides does a hexagon have?” I asked.

“Six,” the children responded in unison.

“Will our table look like this playground when you draw it?” I asked.

“No, the playground is kind of squishy shaped and long,” Melanie volunteered, pointing to the picture in the book. “Our table is perfect shaped.”

“Tell me what you mean by ‘perfect shaped,’” I probed.

After some thought, Melanie said, “Well, it . . . the sides are all the same.” I called on Stanley, who said, “The hexagon table will be a lot smaller than the playground. The playground takes up almost the whole page. Well, it’s half of the map, but this whole side.” He pointed to the playground in the illustration as Melanie had done.

Holding up a piece of 9-by-12-inch white drawing paper and a ruler, I instructed, “Use a pencil to draw your map of our classroom. Using a pencil makes it easier for you to make corrections or change your mind about something. Also, it’s good to use a ruler to help you draw straight lines. After you label the objects on your map, if you’d like to you can add color with construction paper scraps, crayons, and markers.”

I asked if the students had questions about the maps they were going to create. Marne raised her hand. “Do we have to include every part of the room or can we just draw one part of the classroom?”

I distributed pieces of drawing paper and rulers and the students got right to work. All the children drew their maps without taking formal measurements of anything in the room. A few folded their pieces of paper into halves or fourths. When I asked Michael why he had foldedhis paper, he said, “Well, you see, it helps me know where to begin and where the middle is.”

“Where the middle of the room is?” I asked, seeing that his drawing was of only a corner of the room. (See Figure 1.)

Figure 1. Michael drew one corner of the classroom.

“No,” he responded, “the middle of my paper, so then I have an idea of where to put things in my map.”

Michael’s explanation helped me understand that he was trying to be accurate in placing itemson his map. Although the objects in his drawing are placed correctly, they are out of scale.

Payten used a die to check the size of the student desks in her drawing. (See Figure 2.) Drawing one square at a time, she placed the die inside each square to check its size so that all twenty-nine desks would be about the same.

Shelby drew a map of the inside of her desk. It showed how she used space and organized her materials. (See Figure 3.)

Figure 2. Payten drew the entire room, using a die as a template for the desks.

Figure 3. Shelby mapped the inside of her desk.