A Lesson with Fifth Graders

The December 2003 issue of Teaching Children Mathematics (volume 10, number 4) contained an article written by Doug M. Clarke and Barbara A. Clarke, “Encouraging Perseverance in Elementary Mathematics: A Tale of Two Problems.” Following is the second problem in the article: 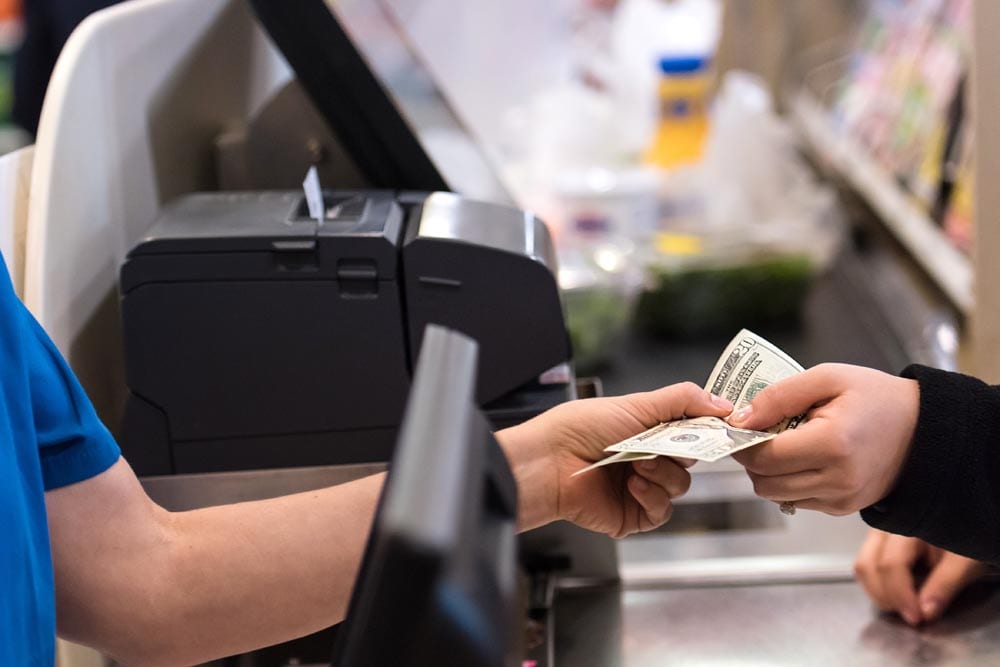 A man goes into a store and says to the owner, “Give me as much money as I have with me and I will spend $10.” It is done, and the man does the same thing in a second and third store, after which he has no money left. How much did he start with?

The article explains that the problem was given to a class of eight-year-olds. The children worked on the problem over a number of days, and their teacher reported that “after a while the mathematics got too difficult for some of the children.” Still, they all continued to participate in different ways, and some children were able to reach a solution. Marilyn Burns presented the problem to a class of fifth graders.

I was intrigued by the problem and before the lesson, as the article suggested, I took the time to solve it myself. (I suggest that you do this, too.) Then, to begin the lesson, I gathered the students on the rug and showed them the journal. “I found a problem in this issue that I thought was interesting,” I told them. “I’ll be interested in your reaction to whether this problem is too easy, just right, or too hard for fifth graders.”

I read the problem aloud and said, “Please think about this by yourself for a moment. As you’re thinking, I’ll write on the board what the man said to each of the three store owners.” I wrote on the board:

Give me as much money as I have with me and I will spend $10.

A few of the students had questions about the problem. “Did he give all of his money away after the third store?” James wanted to clarify.

“And he spent ten dollars each time?” Keely asked.

“Yes,” I said, “he spent ten dollars in three different stores.” I added to what I had written on the board:

Give me as much money as I have with me and I will spend $10.

I then said to the students, “Turn and talk with your neighbor about how you might approach solving the problem. I’ll interrupt you in a few minutes so that we can share ideas.” The room became noisy as the students began to talk.

After a few moments, Scott rushed up to me. “I think I know something about the third store,” he said. “The guy would have to have five dollars when he went in there, because if the storekeeper gave him five dollars, then he would have ten dollars. And then when he spent ten dollars, he’d be broke.” Scott grinned and then sat back down next to Gabriel, his partner.

Next, Mara and Natanya came up to me. Mara had a question. “Did he have to spend ten dollars at the last store?” she asked.

“But what if he didn’t have ten dollars to spend, even after the storekeeper gave him the money?” Mara persisted.

“That would have been a different situation,” I responded. “In this story, the man had enough money each time to spend ten dollars, but after he spent ten dollars at the third store, he had no money left at all.” Mara seemed to accept this explanation and she and Natanya sat down together again.

Soon I interrupted the students for a whole-class discussion. “I think it will be useful to hear one another’s ideas,” I told them. “Let’s talk about the problem together, and then you’ll return to your desks and work on the problem with paper and pencil.”

Hassan shared first. “I tried ten dollars, but it didn’t work because he still had ten dollars at the end.”

“How did you figure?” I asked.

Hassan explained, “In the first store, the guy gave him ten dollars, so he had twenty. So when he spent ten, he still had ten. And the same thing happened in the two other stores.”

Gissele said, “I tried twenty dollars, and that was even worse.”

Gissele giggled. “He wound up with ninety dollars. In the first store, the storekeeper gave him twenty, and that was forty. He had thirty dollars left after spending ten. At the second store, the man gives him thirty dollars, so he has sixty dollars, and that gives him fifty left after spending ten. And in the third store, fifty plus fifty is one hundred, so he spends ten and has ninety dollars left.”

I then directed the students’ attention to the list of problem-solving strategies posted in the room.

Look for a pattern.

Solve a simpler (or similar) problem.

“Hassan tried ten dollars and Gissele tried twenty dollars,” I said. “Which of these strategies do you think they were using?”

“How many of you picked an amount and then checked to see if it would work?” I asked.

About a third of the students raised their hands.

“I tried nine dollars, but he had two dollars left at the end,” Michael said.

“I tried eight dollars, but he was six dollars in the hole at the end,” Elissa said.

“He was in the hole if you started with six dollars,” George said. “I don’t know how much exactly, but it’s a lot.”

“With seven dollars, too,” Travon added.

Alexandra had a different idea. “We think that it’s not a whole-dollar amount,” she said. “We tried some of those numbers, too, and they didn’t work. So it has to be some dollars and some cents.”

“We’ll try some other amounts near the ones that were close,” she said.

“Well, he was in the hole with eight dollars but not with nine dollars, so maybe it’s in between,” Alexandra said thoughtfully.

“I did the work-backward method,” Scott said, returning to the list of strategies. He explained to the class what he had told me before, that the man had to have five dollars going into the third store in order to have nothing left. Scott added, “So then I tried to figure out how much he had going into the second store to come out with five dollars.”

Alvin raised a hand, excited. “I figured that out!” he said. “You have to add ten to the five and then divide by two. Five plus ten is fifteen, and half of that is seven dollars and fifty cents.”

Several students protested. “I don’t get it.”

“Why did you divide it in half?”

“Is he right?” Keely asked me.

“Would you explain your idea some more?” I asked Alvin.

“OK,” he said. “If he had seven fifty, and the store man gives him seven fifty, then he has fifteen dollars, right?” The others nodded. “Then he spends ten and has five left,” Alvin continued. “So if you go the other way, add the ten back onto the five, and then take half, you know what he had when he went into the store.”

Some of the students now nodded in agreement; others were still confused or unsure. I decided that it was time for them to continue working on their own. I said, “I think this is a good time for you all to get back to work. It’s fine if you want to work with a partner, but each of you should do your own paper. Listen to what you should write.” I waited a moment until all eyes were looking at me.

“Keep track of all of the figuring you do,” I said. “Even if something turns out not to be right, leave it there. The information can help you later, and it can also help me understand how you were thinking. When you figure out the answer, explain in words how you finally got it. And finally, write about whether you think this problem was too easy, just right, or too hard for fifth graders.”

“What’s the problem called?” De’anna wanted to know. The students were used to writing titles on their papers.

“You can decide what to name it,” I said.

“Can three of us work together?” Travon asked.

After he solved the problem, James came to me with his usual question: “Do I have to write?”

Writing was always a struggle for James.

I looked at James’s paper and saw that he had solved the problem numerically. I asked him to explain what he had written, and he did so clearly. “But Alvin helped me,” he said.

“That’s OK,” I replied. “It’s fine to use other people’s ideas as long as they make sense to you.”

“I kind of did it my own way, too,” James said. “I guessed and checked, but Alvin worked backward and that was easier.”

“That’s how you can start your writing,” I suggested. “You can explain that you first guessed and checked, and then you used Alvin’s idea.” James returned to his seat to complete his paper.

I called the class back to the rug for a concluding conversation, and the interchange was lively. The general consensus was that guessing and checking, working backward, acting it out, and looking for a pattern were the most used problem-solving strategies. Elissa noticed that when the start amount changed by $.25, the end amount changed by $2.00. Alexandra wondered if the correct answer would double if you doubled the $10.00 in the problem to $20.00.

Scott said, “It makes you think and it’s a good challenge.”

“And it’s not boring,” Gabriel added.

“I think it was hard,” Michael said. “For a long time everything I tried was wrong.”

Some students commented on their papers. George wrote: I thought this problem was just right for fifth graders because it doesn’t take too long and you can’t finish it in 1 min. Travon wrote: This was hard because there is no very helpful pattern that I know of. Cara wrote: I think it’s just right and hard because you think a lot but it takes a long time. Kaisha had a different point of view. She wrote: I think it was pretty easy.