A Lesson with Fourth and Fifth Graders 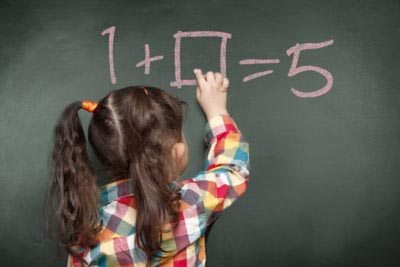 In this beginning lesson, students first explore arithmetic sentences to decide whether they are true or false. The lesson then introduces students to sentences that are neither true nor false but are algebraic equations, also called open sentences, such as x + 3 = 7 or 2 x= 12. The activity appears in Maryann Wickett, Katharine Kharas, and Marilyn Burns’s new book, Lessons for Algebraic Thinking, Grades 3–5 (Math Solutions Publications, 2002).

I wrote on the board:

For each, I had a student read it aloud, tell if it was true or false, and explain why. Few students knew how to read the third sentence. I explained, “You can use a dot in this way instead of the times sign that you usually use for multiplication.”

“I know about the third problem now,” Tawny said. “You read it, ‘six times zero equals six,’ and that’s false.”

She said, “You multiply six times three and divide that by two. Then comes the equals sign. On the other side you do four plus five.”

I paused to give students time to think and then asked Rayna to come up to the board and write her equation. She wrote:

After a few moments, most students were clear that it was correct. I wrote her equation in the True column.

After several other students shared their equations, even though more of the students wanted to do so, I moved on with the lesson. As the students watched, I wrote the following on the board:

“Is this equation true or false?” I asked. The class was quiet. Finally a few hands went up. I called on Jazmin.

“It could be either,” Jazmin said. “We don’t know what the box is, so we don’t know if it’s true or false.”

“How could we make it true?” I asked.

“Write eight in the box because five and eight equals thirteen,” Lizzie said. I did as Lizzie instructed.

“Is there any other number I could write in the box that will make the sentence true?” I asked. “I don’t think so,” Truc said. “I think the only way to make it true is to put eight in the box.” “I think you could make it work by fractions,” Chase said. “You could put sixteen over two as the answer, and that would make it true.” As I wrote 16/2 on the board, several hands went up.

I replied, “The equation would be true as long as whatever we put in the box is equivalent to eight.” No one had any further comments.

“Mathematical sentences like this one are called open sentences,” I said. “They’re neither true nor false because there’s a part of the sentence, the box in my equation, that isn’t a number. The box is called a variable, because you can vary what number you put into it or use to replace it.” I wrote open sentence and variable on the board. I planned to use this vocabulary regularly to help students become familiar and comfortable with it, just as periodically throughout the lesson I interchanged “equation” with “mathematical sentence.”

“Would ‘seven times six equals box’ be an open sentence?” Jazmin asked. I wrote on the board:

Most thought that it was. Lucy said, “Forty-two should go in the box if you want the problem to be true. If you put thirty-nine in the box instead, then it’s false.”

“What about ‘four plus box equals twelve’?” Joshua asked. I wrote on the board:

“I know,” Turner said. “Because whether or not it’s true or false depends on what goes in the box.”

“What would make it true?” I asked. “Show me with your fingers.” The students put up eight fingers each.

“What would make it false?” I asked.

I then said to the class, “With your partner, for a few minutes write some other open sentences.” After a few minutes, I asked for the class’s attention. I called on Lizzie.

“How about ‘fifteen thousand plus one equals box’?” Lizzie said. I wrote on the board:

The others showed thumbs up to agree that it was an open sentence. “What number can we write in the box to make Lizzie’s open sentence true?” I asked. I called on Diego.

“Fifteen thousand and one,” he said.

“Who would like to come up to the board and write fifteen thousand one?” I asked. Few hands were raised. Some children weren’t sure that they could write the number correctly. I called on Keith.

“I can make the box bigger,” I responded. I did so and Keith came to the board and correctly wrote 15,001.

I then called on Kenny to give another open sentence. “‘Triangle minus four equals three’,” Kenny said.

I wrote on the board:

Again, the students showed their agreement. “Who knows what number to put into the triangle to make the open sentence true?” I asked.

“Seven,” Dana said. The others agreed.

It’s important for students to learn that we can use different symbols for variables. I was pleased that Kenny had volunteered the use of a triangle. If no student had, however, I would have written an open sentence as Kenny did, talked about it with the students, and thenintroduced other symbols as well. Since Kenny made his suggestion, I built on it at this time. Underneath Kenny’s equation, I wrote:

I said, “I think that my open sentence is the same as Kenny’s in one way and different in another way. Who can explain what I’m thinking?” Hands shot up.

“You used a box instead of a triangle,” Tawny said.

“But the numbers are the same,” Terry said. I then wrote on the board:

“What about this equation?” I asked. “Is it an open sentence?” Some thought it was and others weren’t sure.

“Who would like to use your own words to explain what an open sentence is?” I called on Tony.

“It’s a sentence that has a box or something that stands for a number,” Tony explained. “It depends on what number you put in whether or not it’s true.”

“So what do you think about the sentence I wrote with the x instead of a box or triangle?” Most of the students thought it was an open sentence; three weren’t sure.

“Who would like to explain why you think it’s an open sentence?” I said. I called on Terry.

He said, “It has something that stands for a number that’s missing. I think you can use whatever you want. An x is OK, so is a box, so is a triangle.”

“Can you use any letter?” Lucy asked.

“Yes,” I replied. “Actually, you could use any symbol you’d like. But mostly we see boxes, triangles, and letters used for variables in equations.” I continued until the end of the period,having students give their open sentences and asking the others to think about what numberto use for the variable to make the open sentence true. By the end of class, the students all seemed comfortable with categorizing true, false, and open sentences and figuring out how to make open sentences true.