Annette Raphel is a Math Solutions instructor and recipient of the Presidential Award for Excellence in Teaching Mathematics. She is the author of Math Homework That Counts, a resource for teachers in grades 4–6. Annette is currently lower school head at Milton Academy in Massachusetts, where she taught this percent lesson to middle school students. In this activity, important concepts about percent came up in a context that mattered to students — themselves. The lesson had the added bonus of serving as a wonderful community builder. 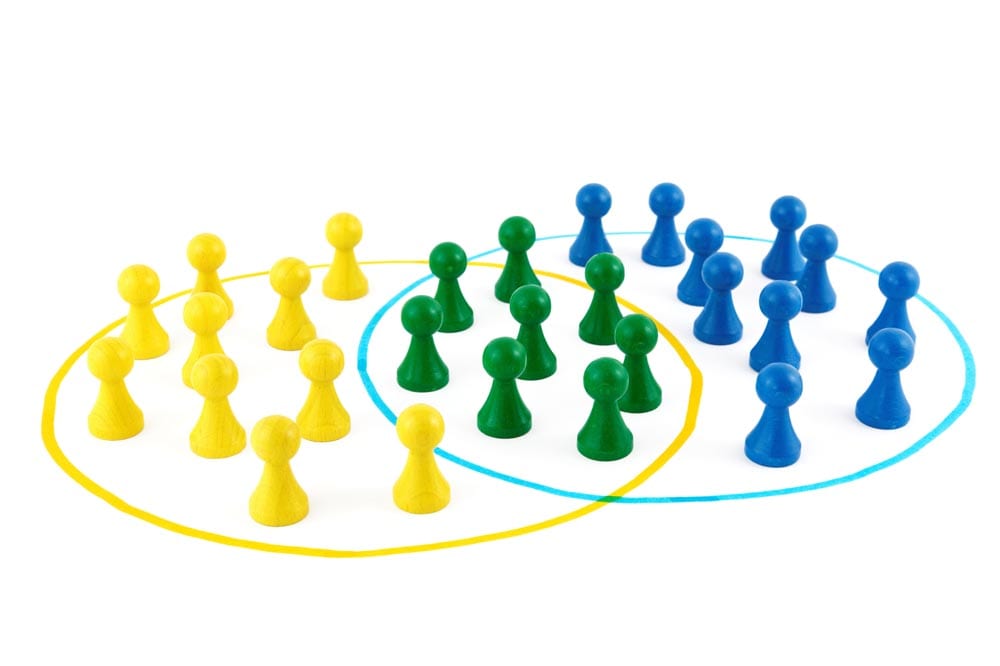 I drew a large Venn diagram on the chalkboard and labeled each of the three intersecting circles: Has taken musical instrument lessons, Doesn’t like papaya, Street address has exactly three digits. The students’ interest piqued when I wrote my initials on a 1-by-2 inch Post-it Note and placed it in the intersection of all three circles.

I explained, “Each circle describes something that’s true about me, so I put my initials in the intersection. That’s the only place on this Venn diagram that’s inside each of the three sets.” My explanation reviewed terminology about Venn diagrams.

“What three things do you now know about me?” I asked.

“You play an instrument, you don’t like papaya, and your house number has three numbers in it,” Rose said.

“Now I’m going to make some guesses about our class,” I said. I wrote on the board:

“Also,” I continued, “I think only one other person in the class belongs in the center with me. Since there are twenty-ﬁve of us all together, what percent do I predict will be in the intersection?”

Jason said, loudly and conﬁdently, “Each person is worth 4 percent because there are twenty-ﬁve fours in one-hundred.”

“Two people would be 8 percent,” Lauren added. I wrote on the board:

I then gave each student a Post-it Note to use for his or her initials. Then I asked Maryann to go up to the board and place hers on the Venn diagram.

“I’m kind of confused,” Maryann said. “I take music lessons and my address has exactly three digits, but I don’t know if I like papaya. I think I need another Post-it.”

Aaron had a thought. “Since you don’t know whether you like papaya or not, you just need to be in the circles that say you live in a house with three numbers and that you take music lessons.” He came up and helped Maryann place her Post-it Note.

“Is there anyone who doesn’t belong in any of the circles?” I asked. Jeffrey raised his hand.

“So, should Jeffrey throw out his Post-it Note?” I asked.

“I think I go outside,” said Jeffrey as he went up and placed his Post-it outside of the three circles. I nodded my agreement.

I then placed my ﬁnger in the section that was inside the circle labeled “Has an address of exactly three digits” but not in any other set.

“What’s true about someone who would put his or her Post-it right here?” I asked. Louise correctly identiﬁed that the person had a street address with three digits.

“What else do you know about that person?” I asked.

Everyone thought for a moment. Then Louise piped up, “They don’t like papaya and they don’t play an instrument.”

I then said, “Now you’ll all place your Post-it Notes where they belong. If you’re not sure, consult with a friend.” I had the students come up to the chalkboard in small groups. Some children knew exactly where to place their Post-it Notes, and others were hesitant. But animated conversation helped each student decide.

After all of the students had posted their initials, we counted the Post-it Notes to verify that there were twenty-ﬁve of them. I allowed a minute for silent inspection of the results. We then tallied the information and I recorded it on the board:

“Let’s ﬁgure out what percent of our class actually ﬁts each category,” I said. “Don’t reach for your calculators — I’d like us to ﬁgure these out in our heads.” Calculators are available to students at all times, so this wasn’t a typical direction. However, I wanted the students to reason mentally and talk about their thinking. I felt the discussion would help students who weren’t as conﬁdent. To help, I wrote on the board what Jason had already said:

I asked, “How many people would represent 50 percent?”

“Twelve and a half,” said Lauren thoughtfully, “but you can’t have a half a person, so I guess we can’t have exactly 50 percent in any category.”

“Let’s see how well I did with my guesses,” I said. “Fifteen out of twenty-ﬁve of us take music lessons. Is it more than 50 percent or less than 50 percent?” The benchmark of one-half is useful for calculating exact percentages.

Paul answered, “I know that ﬁfteen-twenty-ﬁfths can be reduced to three-ﬁfths, and I know that each ﬁfth is 20 percent. So I needed three 20 percents.”

Isaac joined in. “I just multiplied ﬁfteen by four since I knew that each person is worth 4 percent,” he said.

Tom added, “I know that 100 percent of the people would be twenty-ﬁve, so ten people, or 40 percent, are not in the circle. Sixty percent are.”

“Not so good,” Alan said. “You guessed less than half of us and it was more than half.”

Sarah countered, “But she was only 15 percent off.”

“Fifteen percent is practically four people off,” David said, “and in a class of twenty-ﬁ ve, that’s not too bad.”

We then ﬁgured out that 36 percent lived at three-digit addresses and 20 percent disliked
papaya.

Next I distributed newsprint and markers and asked the students to draw Venn diagrams with three intersecting circles, label each, and guess how many of the class would fall into each category. At the end of class, I collected the papers. The following day, I redistributed them and had every student sign in on everybody else’s Venn diagram. Students then calculated the percentages of people who ﬁt each category. There was a great deal of collaboration, and the class discussion that followed was rich and productive.