What Could Be the Sum? 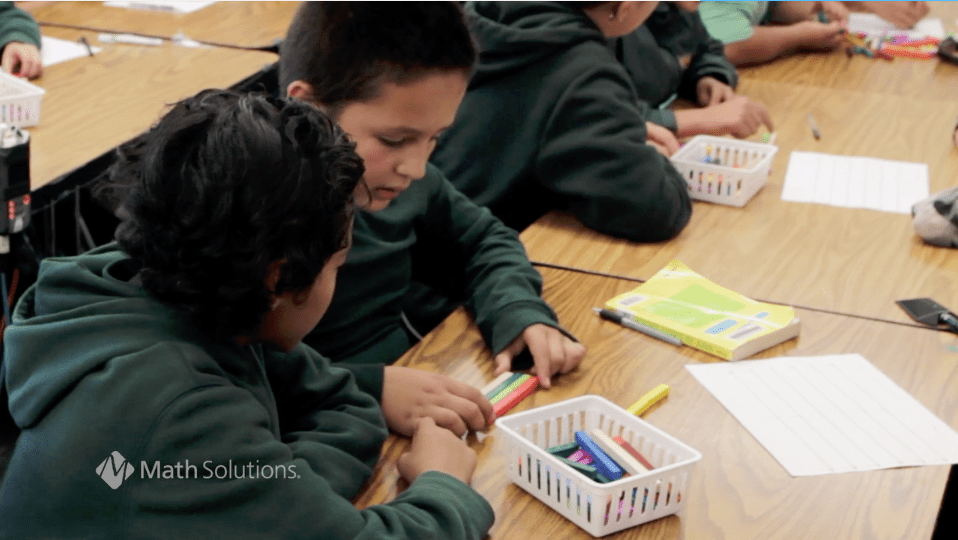 It’s important to make connections among the different areas of mathematics, and this lesson presents an addition problem in a geometric context that is appropriate for third graders. The problem also is good for supporting mental computation and for giving children experience with a math problem that has more than one solution. The idea for the lesson comes from Peter Sullivan and Pat Lilburn’s book, Good Questions for Math Teaching: Why Ask Them and What to Ask, K–6, a resource that Marilyn draws on regularly when planning new lessons. Marilyn taught this lesson to third graders at Park School in Mill Valley, California.

As the third graders watched, I drew on the board a sketch of a cube with three faces showing, labeled with 7, 8, and 9. “It’s three-dimensional,” Purna commented.

“The faces of this cube are numbered consecutively,” I said and then asked,“Who knows what consecutively means?” No one had an idea.

“It means that the numbers go in order,” I explained. “When we count, we count with consecutive numbers, like seven, eight, nine.” I wrote on the board:

“But seven, ten, and two are not consecutive numbers,” I said. “They’re not in order.” This seemed to be clear to the children. I also thought that face was new terminology for them when referring to a cube, but I thought that its meaning was clear from the context. I thought I’d raise another question about cubes.

“How many faces does a cube have?” I asked. “Think to yourself for a moment, and then check your idea with the others at your table.” Conversation broke out. When I called the children back to attention, I called on Audrey.

“Tell me how you were thinking,” I said to Audrey, holding her eyes with my gaze and ignoring the protests from some of the other students.

“Oooh, I’m not sure,” Audrey said, sensing that she was wrong.

“Let’s all give Audrey a chance to think,” I said. “Take your time, Audrey. Or maybe you’d like to get a cube and see.”

Audrey thought out loud. “There’s a top and a bottom, and that’s two. Then there are the ones around the side—one, two, three, four. Is it six?” She was tentative but encouraged by the approval from others.

Darcy said, “You’re right. There are four around the side, then the top makes five, and the bottom makes six.”

I took a cube from the class supply and demonstrated. I suspected that some of the children still needed to verify this for themselves, but I decided that they could do so later when they were working on an individual assignment.

I pointed to the illustration on the board. “So we only know the numbers on three of the faces of the cube. But we know that all of the numbers are consecutive. What numbers could be on the other faces? Talk in your groups about this.” I gave them a few moments to do this. When I called them back to attention and asked for the other numbers, all of the tables reported the same answer, that the numbers on the sides we couldn’t see in the drawing were 10, 11, and 12. I wrote on the board:

I said, “Here’s a problem for you to solve in your head. What’s the sum of all six numbers on the faces of the cube?”

“Can we work together?” Hillary asked.

“Yes,” I said. “It’s fine to talk with the others in your group. Raise a hand when you’re willing to give your answer and explain your strategy.” I gave the students time to do this before calling them to attention and asking for their ideas. Several students presented their ideas and I recorded on the board to represent each child’s thinking. Isak, for example, added the numbers in the ones place and then the tens. I recorded as he explained:

Devin added the tens first and then looked for other combinations of ten. I recorded:

I also recorded the thinking offered by Danielle, Will, and Morgan, each of whom added in a slightly different way.

The children were now satisfied that we were done. They were surprised, however, when I announced, “When I thought about the problem of figuring out what the numbers were on the other three faces of the cube, I came up with a different solution. I thought that they could be five, six, and ten.” I wrote on the board:

“What sum do you think I got?” I asked. The children went back to work. As I had done before, I recorded several of their strategies for combining the numbers. Will, for example, combined numbers to make three partial sums of fifteen and then found the total. I recorded:

After the class was in agreement that 45 was the sum, I asked the students to talk in their groups about other possible numbers for the faces of the cube. We talked about two more solutions, and then I listed number sentences for all of the solutions we had found:

As a follow-up individual assignment, I gave each student a worksheet with a cube drawn at the top without any numbers on the faces. I told them, “Write any three consecutive numbers on the three faces showing, and then figure the possible sums of the numbers on all six faces if they were numbered consecutively.” To help the children with choices, I drew three possibilities on the board, presenting examples that gave challenges at different levels. On one cube I labeled the faces 2, 3, and 4; on another I wrote 9, 10, and 11; on the third I wrote 20, 21, and 22.

Again, the children approached solving these computation problems in a variety of ways.

Related Publication:
Good Questions for Math Teaching: Why Ask Them and What to Ask, K–6
by Peter Sullivan and Pat Lilburn