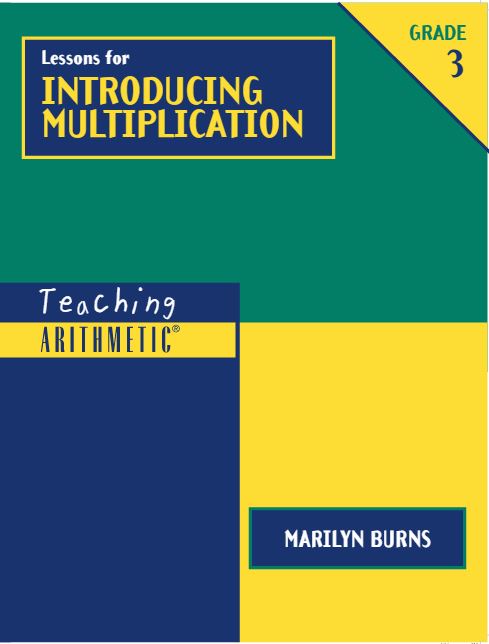 Lessons for Introducing Multiplication, Grade 3 is a revision that replaces Multiplication, Grade 3, the Math By All Means unit I wrote in 1991 that has been used by more than 85,000 teachers. Over the years since I wrote the original unit, I’ve learned a good deal more about teaching multiplication to third graders from reteaching lessons, trying new lessons in many classrooms, poring over student work, and receiving feedback from other teachers. My new book expands and improves upon what I first wrote.

While Lessons for Introducing Multiplication, Grade 3 includes most of the lessons and assessments from the initial unit, some are reorganized and others include additions and edits. The new book also presents five completely new whole-class lessons, as well as five new lessons in the Additional Activities section. Also, four children’s books, none of which appeared in the earlier book, are incorporated into lessons.

Another major change is that Lessons for Introducing Multiplication, Grade 3 isn’t organized as a cohesive unit. While it’s possible to spend a continuous stretch of weeks using these lessons, I don’t think that’s the best decision. In my experience, children need time to absorb concepts, and I think it’s more effective to introduce multiplication in a three-week period and then wait two months or so before returning for another three-week period of instruction, or arrange for three chunks of time, each two weeks or so, spaced throughout the year. When students return to ideas after a break, they bring a fresh look and the benefit of the learning they’ve done in other areas of mathematics.

The new book also reflects a shift I made in my thinking about what’s important when introducing multiplication. I think it’s essential to emphasize the role of equal-size groups so that children understand its importance to multiplication. The teaching I’ve done since writing the original unit taught me that I didn’t do a thorough enough job with this idea in the original unit, and I’ve tried to fix that.

The excerpt that follows is from one of lessons in the book. Children compare the results from two multiplication problems, both presented in context. The lesson gives third graders experience with both representing problem situations that involve multiplication and computing accurate answers. We continued with problems like this over the next several weeks, with children choosing their own numbers.

“Which window do you think has more panes?” I asked the class.

I waited for a moment to see if Amelia wanted to continue. She seemed on the verge of offering another idea but then said, “Oh, let someone else go.”

“Raise your hand when you have another idea and we’ll listen,” I told her. I called on Bo.

“It’s equal,” he said, “because five plus four is nine and three plus six is nine.” I recorded on the board:

“Hmmm,” I said, “I agree that five plus four is nine and three plus six is nine, but I’m not sure how that helps us figure the number of panes in the windows. I need to think some more about that.”

Kelly gave a more direct response. “That’s not right, Bo,” she said. “You have to multiply, not add. Five times four is twenty.”

“What does the twenty tell you?” I asked Kelly.

“How many panes there are on that window,” Kelly answered. “See, you go five, ten, fifteen, twenty.” I wrote on the board:

“Let’s check that answer by figuring the other way, adding up five fours,” I said. I wrote on the board:

“Can I do the other one?” Alicia asked.

“Three times six is eighteen,” Alicia said. “You go six plus six, and that’s twelve, and then six more makes eighteen.” I wrote on the board:

“So you added three sixes,” I said, pointing out the three 6s I had used as addends. “Can anyone figure it another way?”

Sergio took a breath and said, “Six and six makes twelve.” Then he counted on his fingers to find out that twelve and six more made eighteen.

“Solving problems in several ways is good for checking that our answers are right,” I reminded the children.

“I have another way for the other one,” Ruthie said.

I brought the conversation back to the original problem and said, “So which window has more panes?”

“The first one,” several children answered.

I then explained to the children what they were to do. “Now you’ll each solve two Which Has More? problems on your own. One is about cookies on trays, and the other is about wheels on bicycles and tricycles. Watch as I write on the board.” I wrote:

I told the children, “For each, be sure to write the multiplication problems. Also, do your figuring in more than one way so that you have a check on your answers.”

Lydia’s paper illustrated how she used the commutative property to figure the number of cookies on each tray in two ways.

Amelia answered the question correctly by counting the wheels she drew.