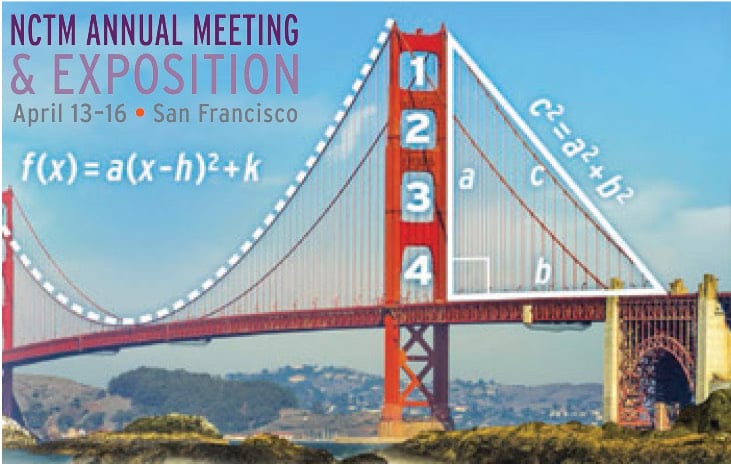 I was never good at math. Language Arts was where I excelled. It started with my first short story in sixth grade that Mrs. Westra read aloud to the class. I was hooked on writing after that. What I wasn’t hooked on was math.

I would say things like, “I’m not a math person.” Unfortunately, I grew up with a fixed mindset when it came to math.

So how did I end up at NCTM with 9,000 math teachers? Six months ago, I heard Emily Diehl of Mindset Works speak about growth mindset and math students. And I started my journey of developing my own growth mindset, and part of that is encouraging myself to step out of my comfort zone. It was humbling to be at NCTM, because there’s a lot I don’t remember about math and some I probably didn’t fully understand in the first place…instead I was swept away with the rest of the class on to the next algorithm. At NCTM, I saw things in a new way that I wish I’d seen in middle school.

I was so inspired by the fun I saw these teachers and speakers having with math—and by how eager they are to make it REAL for their students.

Here are a few statements and strategies that inspired me at NCTM—and in some cases, I think they would have helped the 7th grade version of me find my love of math: ShadowCon, the teacher-led mini conference, was probably the most math energizing session I attended; each speaker sent us away with a Call to Action. Brian Bushcart’s really hit home for me:

Give yourself permission to try. Get to know the math. Ask questions. Allow students to explore, play and find joy in doing math. Inviting students to ask their own questions about math was a major theme throughout the conference. The mantra in recent years has been to make math “real world” to make it interesting for students. But the message I heard at NCTM 2016 was that getting kids thinking deeply about math so that they can visualize it makes it real world and makes it personal to them. On the final day, Dan Meyer said, “If you can guess about it, it is your real world. If you can argue about it, it’s your real world… Invite them to ask questions about numbers and shapes.” Empowering students to explore math and embrace learning in this way resonated with me both as a former teacher—and as a former student who would love to take math all over again.

Christine Condon is Senior Manager of Communications at Houghton Mifflin Harcourt. She is a former secondary English teacher who has worked in educational publishing for more than 15 years. Christine holds an MFA in Creative Writing from The New School in New York City, and her blog articles have appeared in Business Insider and The Huffington Post.