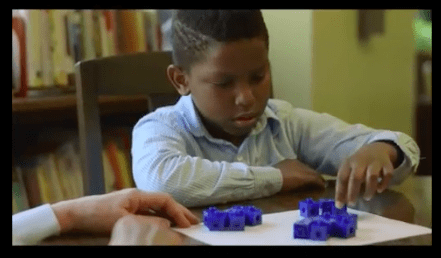 If you’re familiar with Cooks Illustrated magazine, you know that they use their test kitchen to tinker with recipes and improve on them. In each issue, they report on all of the attempts they make and then finally present a recipe they recommend. In a way, I feel as if my search for a way to assess students’ understanding of place value has gone through a similar math teaching test kitchen.

By the end of first grade, students are expected to understand that the two digits of a two-digit number represent amounts of tens and ones. In second grade, they extend their understanding to three-digit numbers and the meaning of the digits in the hundreds, tens, and ones places.

First and second graders are generally familiar with numbers up to 100. Many can write the numbers from 1 to 100. Many can compare numbers—for example, 54 and 45—and tell which is greater. Many can identify which digit in two-digit numbers is in the tens place and which is in the ones place. These used to be the assessments I relied on for checking students’ understanding of place value, typically using worksheet assessments on which students filled in missing numbers, circled the greater numbers, and indicated whether digits were in the tens or ones place.

But once I began to spend time asking students questions, face to face, I found that while worksheet assessments might be helpful, interviews often produced surprising and sometimes disturbing evidence of shaky understanding.

For example, while students could fill in missing numbers correctly, when I asked them to count to 100, some were confused when changing from one decade to the next—for example, stumbling when they reached 29, not sure what came next. When I asked students to write a number like 38, some incorrectly would write 308—writing 30 as they said “thirty” and then writing 8 as they said “eight.” While they could tell which digit was in the tens place and which digit was in the ones place, when comparing 54 and 45, for example, some could only offer the explanation that 54 is greater because “it comes after 45”—their explanations didn’t relate to the place values of the digits.

A More Reliable Way to Assess
Convinced that worksheet assessments were not sufficient, I collaborated with a team of colleagues (special thanks to Mallika Scott and Lynne Zolli) to create a litmus test for finding out whether students have the necessary understanding of place value. We wanted the interview to be short (because the information is important to have for all students in the class), efficient (requiring a minimum of materials), and informative (giving clear information about students’ understanding). I’m not including here all the interview options we tried and eliminated, as the writers of Cooks Illustrated do for their recipes, but instead to cut to our current final version. 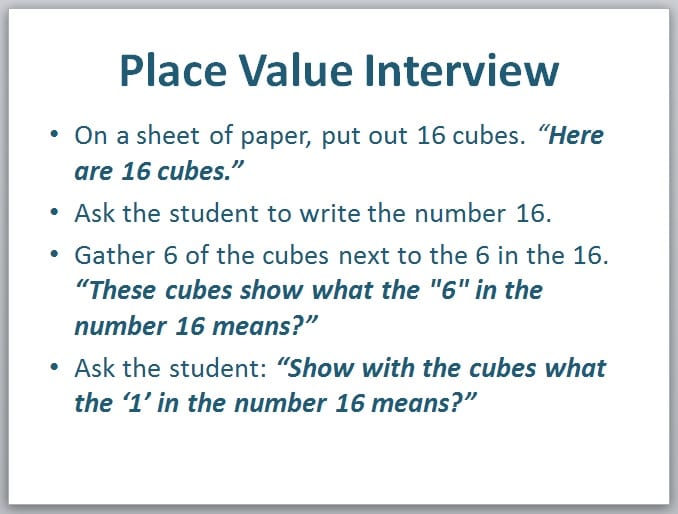 Last spring, when I spent a day in an elementary school in Brooklyn, NY, I used this as a baseline assessment to check second graders’ place value understanding with two-digit numbers. View how a few of the students responded.

First watch Anna. After asking me to repeat the question, Anna responds automatically that the 1 in the number 16 means 10.

Daryl responds correctly, counting out the remaining cubes to show that the 1 in the number means 10.

Jonathan also demonstrated his understand of the meaning of the digits.

However, other students’ responses indicated their lack of understanding. As an example, Gabriela shows one cube to represent the 1 in the number 16.

Now What?
My hope is that you’ll try this assessment with your students. My suggestion: Predict first for each of your students how you think he or she will respond. Then ask and see what you learn. I’d like to hear from you, and for all of you to hear from each other, so please post comments, results, surprises, and any questions you have.

After Interviewing, Then What?
Incorporate into your class instruction investigations that help students build understanding of place value. In the new fourth edition of About Teaching Mathematics, I include a collection of suggestions for teaching place value on pages 344–358. Also, I rely regularly on the ideas presented in Teaching Arithmetic: Lessons for Introducing Place Value, which I wrote with Maryann Wickett. And for students who would benefit from additional intervention, Do The Math modules Addition/Subtraction A and B are extremely useful.