A Lesson for Kindergarten 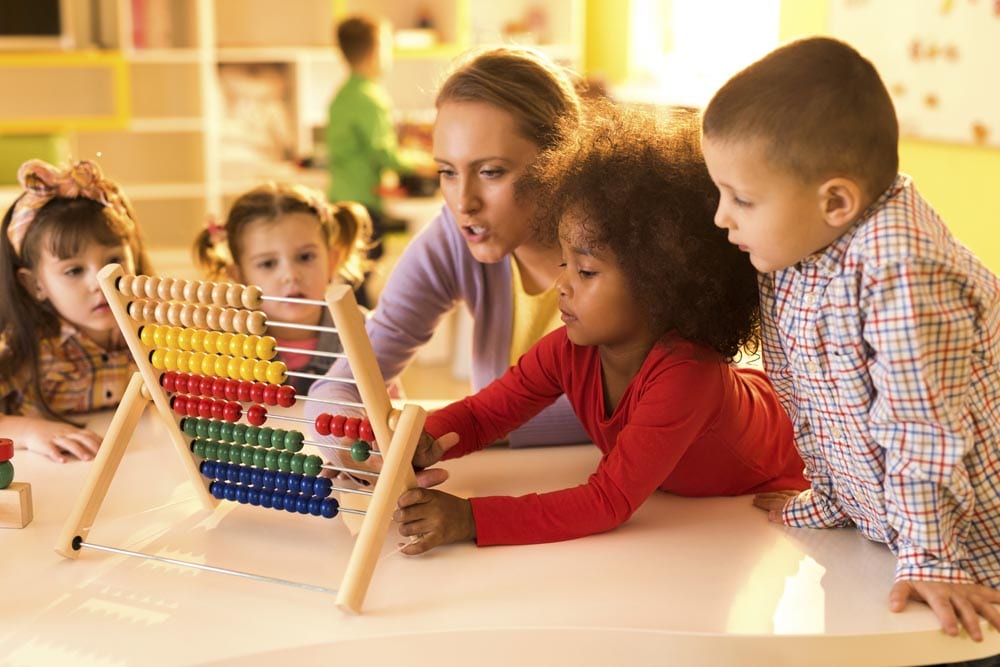 Andrea Holmes knew that the kindergarten children in Mrs. Fisher’s class had had numerous opportunities to listen to and engage with counting books. She also knew that additional practice allows children to continually think about numbers from one to ten and provides a glimpse of the problem- solving strategies children rely upon most. To further the children’s experience with number and provide an assessment opportunity for herself, Andrea chose to use this lesson based on the children’s book Counting Crocodiles, by Judy Sierra (Harcourt Brace, 1997).

In this rhyming tale, a hungry but clever little monkey is stranded on her island in the Sillabobble Sea with nothing but lemons to eat. She spies a banana tree on another island across the sea, but, to her dismay, the sea is filled with vicious crocodiles. Climbing up the lemon tree, she slyly says, “I wonder, are there more crocodiles in the sea, or monkeys on the shore?”

An engaged crocodile approaches, saying, “Just look at us! I have a hunch you’ve never seen a bigger bunch,” challenging Monkey to count them. Not quite as clever, Crocodile intends to eat Monkey for lunch, but only after he is able to prove to her that there are indeed more crocodiles than monkeys. As the crocodiles line up for Monkey to count, they unknowingly create a bridge for her to cross, enabling Monkey to reach the island with the banana tree. Ready to eat her now that she has reached the other island, the crocodiles ask, “How many of us did you find?” With her mouth full of bananas, she convinces the crocodiles that she needs to count them one more time to be sure, allowing her to make it back to her island. This lesson engages students in counting and adding the numbers one through ten.

Before reading Counting Crocodiles, I explained to the children that this story was about a clever little monkey who plays a trick on some crocodiles. I asked them to think about what she does that is so clever and how she goes about tricking the crocodiles. To set the stage for the problem-solving situation that would follow the story, I asked them to think about how many crocodiles the monkey tricks. The children were immediately engaged in the story, drawn to its rhyming nature. Throughout the reading, I checked on their thinking by asking them to show thumbs up or down if they had an idea about the trick Monkey played and about how many crocodiles there were so far.

After the story, I asked the children several questions to get them thinking about the story. “Why do you think Monkey wanted to cross the Sillabobble Sea to get to the other island?” To avoid having children shout out their responses, I reminded them to first answer my questions in their heads.

After a moment, I asked them to share with a neighbor sitting next to them. Sharing with a neighbor ensures active participation of all the children. To begin the discussion, I asked Erin to share why Monkey wanted to cross the Sillabobble Sea. “She wants the bananas!” Erin explained. The rest of the children responded with a thumbs-up sign to support Erin’s answer.

I continued. “Why did Monkey ask, ‘I wonder, are there more crocodiles in the sea, or monkeys on the shore?’”

Following the same process, I called on Max, who replied, “She wanted the crocodiles to help her get across the sea.” Again, a majority of the students gave a thumbs-up.

“What is Monkey cleverly doing as she counts the crocodiles?” I inquired. “Tricking them by getting them to make a bridge,” Tate eagerly answered.

“After Monkey has counted the crocodiles, why do you think she says that she needs to count them one more time?”

“She needs to get back to her lemon tree,” Karissa told the class.

The children had demonstrated their understanding of the story by thinking, sharing with their neighbors, and, finally, explaining their thoughts to the class. Next I encouraged them to think about the question I had posed before reading the story. “How do you think we can figure out how many crocodiles were in the sea altogether?”

Using strategies from Comprehending Math: Adapting Reading Strategies to Teach Mathematics, K–6, by Arthur Hyde (Heinemann, 2006), I asked, “What do we know for sure about this problem?”

“We know there were a lot of crocodiles,” Sophia offered.

“That’s right,” I responded. “Are there any clues that tell us about the number of crocodiles?”

Chase eagerly shared, “There are three hundred!” His answer helped me realize I needed to provide more scaffolding.

I showed the students the page where Monkey starts counting the crocodiles. “How many crocs does Monkey count on this page?” I asked.

In unison this time, the class said, “One crocodile!”

At the top of the first column in a three-column chart, I wrote the heading What We Know About This Problem. Under that heading, I wrote one crocodile. I turned the page and the children said, “Now two crocodiles.” I added that to the chart. The children continued to tell me how many crocodiles Monkey counted on each page. After I wrote ten crocodiles, Bryce pointed out that there were a lot of crocodiles to count.

“What are we trying to find out with this problem?” I asked.

The children paused to think before they raised their hands. I asked them to say their answers together. “How many crocodiles there are altogether!” I recorded this in the second column on the chart under the heading What We Are Trying to Find Out. The third column of the chart was labeled Special Things to Remember.

“Are there any things that we should remember when trying to solve this problem?” I asked. Their faces told me that they were perplexed by this question. I rephrased it to help them understand. “What do we know about counting and about this problem that will help us figure it out?”

Samantha chimed in, “We need to count them.” I put Samantha’s comment on the chart in the third column.

Abby added, “We need to remember that the numbers go in order from one to ten.” I added Abby’s idea beneath Samantha’s.

I noticed Johnny looking at the first column of the chart, where the numbers of crocodiles were listed. He was trying to add the numbers in his head. I asked the children to turn to a partner and talk about ways they might solve this problem. Johnny waved his arm eagerly. “It’s fifty- four,” he proclaimed.

On a separate piece of chart paper, I recorded Johnny’s strategy under the heading Strategies and asked students for other ideas. Garrett said to draw a picture of each crocodile. Chandler said to make a line of all the crocodiles and count them. Abby reaffirmed her previous idea of counting them in order from one to ten.

When no one else had ideas to share, I explained, “I have some Unifix cubes you may use to help you as you work with your partner to figure how many crocodiles. How might you use these cubes to help you?”

Isabella said, “Use Abby’s idea of counting them from one to ten, but use each cube as one crocodile.” I recorded Isabella’s idea. As I passed out unlined paper, I explained that students were to work with their partner to solve this problem.

While the children worked, I noticed that the majority of them were quick to attempt both Abby’s and Isabella’s ideas. However, in their initial efforts, they naturally began working independently. I realized I needed to provide a quick demonstration of how to work together. With Austin’s help, I modeled for the class talking together, working together, and taking turns. That seemed to do the trick, as only a few of the pairs needed further assistance with partnering.

Jordan and Anisha immediately put their cubes together in a pyramid fashion with one on top and ten on the bottom. They counted the cubes and easily came up with fifty-five. I asked them then to record their answer and what they did on the paper. Recording on paper was a challenge. They wrote 55 but were having trouble showing what they did to solve the problem. I asked if they could create the same picture on paper that they had made with the cubes. I hadn’t anticipated the difficulty of this task for kindergartners.

Bryce, eager to use the cubes, began making long lines. “How many crocodiles have you counted so far?” I asked.

“I know there are forty-nine,” he replied. “How do you know?” I continued.

“I counted them while you were reading the book,” he responded. “How many do you have right now?” I asked.

I encouraged him, with his partner’s help, to see if he could rearrange the cubes so that they showed how the crocodiles were introduced in the story. They made rows of cubes from one to ten. Both Bryce and Chase announced, “There are forty-eight!”

I realized they had left out the row of seven. I questioned, “Do you have a cube for every crocodile?”

They explained to me that they had counted. When I asked them to show me, they were able to see where they had missed a row of cubes.

“We can fix that,” they both said confidently. They added the row of seven cubes, but they also had difficulty representing their thinking and problem solving on paper.

As a guest in Mrs. Fisher’s class, I had about fifty minutes for this lesson; twenty of those minutes were set aside for the children to work. With few exceptions, the children were able to work with their partners and use the Unfix cubes to solve the problem. Only a handful of the thirty-three children in the class had difficulty counting the cubes (good information for further counting practice). When reflecting on this lesson, I decided my next visit should provide ample opportunities for the children to problem solve and represent their thinking on paper.