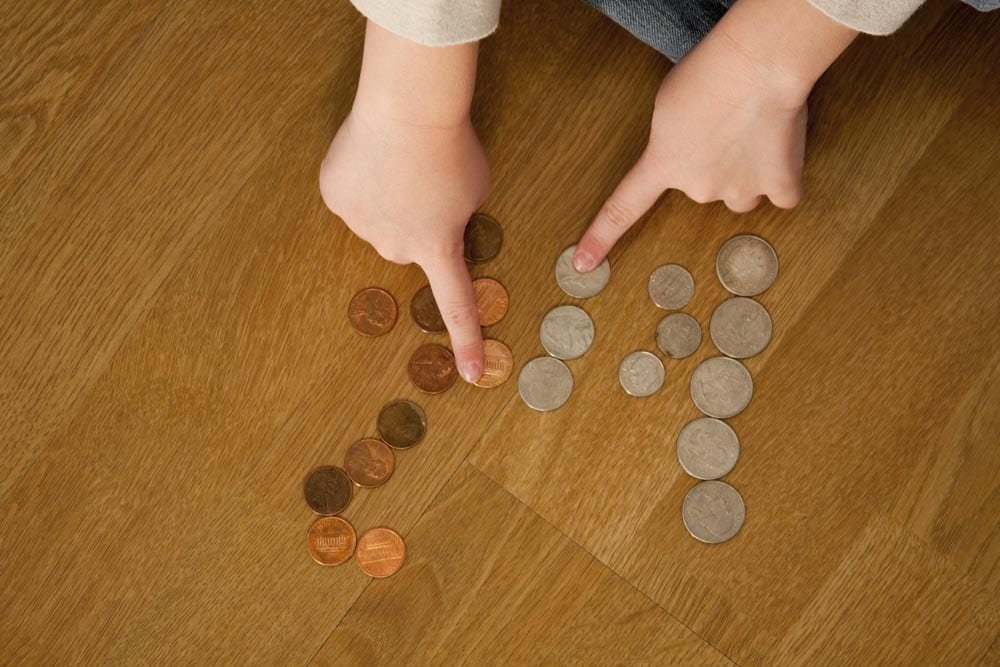 Marilyn is always on the lookout for ways to provide students experience with computing mentally. Her colleague Jane Crawford gave her the idea of presenting older students with the problem of figuring out the ages of coins. To prepare for the lesson, Marilyn collected loose change for several days, choosing coins that were made before 1990. Marilyn planned to ask the students to figure in their heads rather than use paper and pencil. Her goal was for them to focus on making sense of the numbers and to discuss the different strategies they used for figuring. Marilyn tried this lesson with Annie Gordon’s fourth and fifth graders in Mill Valley, California.

The lesson below includes Marilyn’s account of what transpired when she taught the lesson.

1. Show the class the plastic bag of coins. List on the board how many of each coin are in the bag. For example, my bag contained the following:

2. Ask students to figure out in their heads how much money there is in the bag.

3. Ask several students to explain how they figured what the coins were worth (in my case, they totaled $1.39). Record their answers on the board as they report. In my class, as Dylan reported, I wrote:

4. Now tell the students that you have another problem for them to solve mentally. Choose one of the pennies, and show them where, for example, 1978 appears on it. Ask the students, “What does the nineteen seventy-eight tell us?” Usually students know that it is the year the coin was made. Now ask students, “How old is this penny?” Tell students to talk with their partners about this.

5. Ask one student in each pair to raise his or her hand and explain how they figured out their answer.

When I taught this lesson to a class in the year 2000, students reported several different methods of figuring that the penny was twenty-two years old. Lucy said, “I know that nineteen seventy is thirty years away from two thousand because seventy is thirty away from one hundred. Then I subtracted eight from thirty to get twenty-two.”

Benny reported, “I knew that nineteen eighty was twenty years away from two thousand. I still had two more years because nineteen seventy-eight is two years from nineteen eighty. So twenty plus two is twenty-two.”

Write on the board as students report, to model for them how to record their thinking.

7. Then have students each take one of the coins and, working individually, calculate its age. “First figure in your head,” I directed the students I was working with, “and then write an explanation of how you got your answer.” (See Figure 1.)

Figure 1. In a classroom in 2000, after explaining how she knew that her 1987 penny was thirteen years old, Rachel showed her calculations.

Lesson Notes for the Teacher

This activity is good to repeat from time to time. By figuring out problems themselves and hearing others’ strategies, students become more adept at mental calculations.