The Game of More 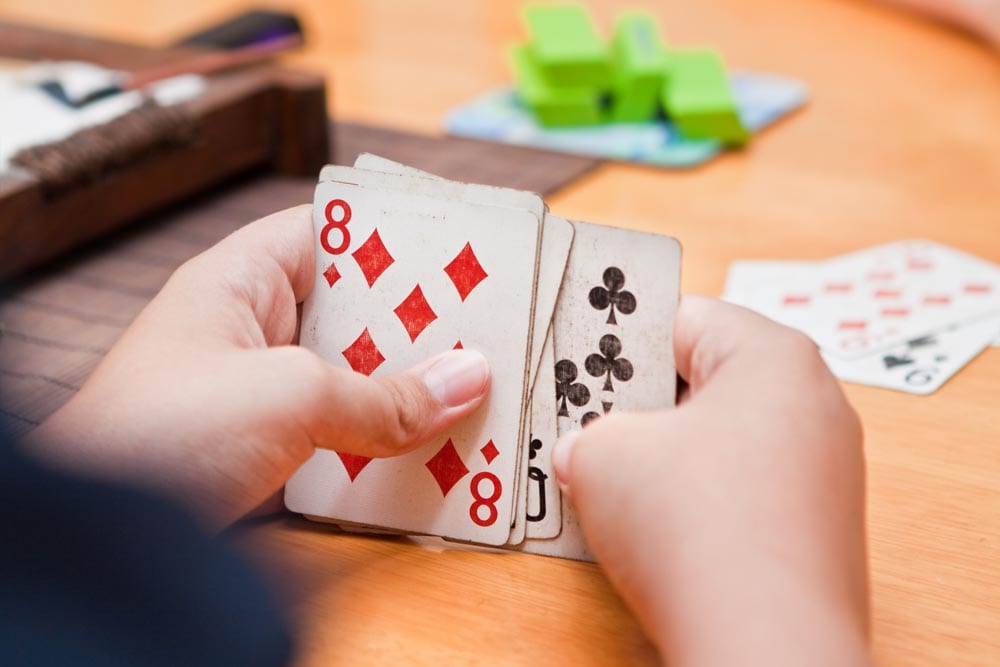 As part of their classroom routine, Bonnie Tank and Lynne Zolli regularly ask children to figure out answers to questions like “How many more?,”“How many less?,” and “What’s the difference?” The Game of More provides a context for asking these questions. This card game gives children practice with basic facts and with adding and subtracting two- and three-digit numbers. The following is an excerpt from a lesson that appears in Bonnie and Lynne’s book, Teaching Arithmetic: Lessons for Addition and Subtraction, Grades 2–3 (Math Solutions Publications, 2001). The lesson in the book explains how to use the game for a statistical investigation and also how to extend it to so the children work with larger numbers.

Bonnie gathered the second graders at the front of the classroom and held up a deck of playing cards. She said, “I know that many of you have used playing cards before. Today I’m going to teach you a new math game for two players. It’s called the Game of More.”

Bonnie then asked a question to focus the children on the deck. “If I keep the jack, the queen, and the king of hearts in my deck, how many hearts are there in all?”

“How many spades?” Again the class responded with thirteen. “How many diamonds?”

“How many cards in all?” Bonnie asked.

There was a murmur of “fifty-two” when Mark responded, “It’s fifty-two. Everyone knows that’s how many cards there are in a deck.”

“But how do you know that’s correct?” Bonnie asked.

“I know another way,” Jennifer said. “You make four piles of thirteen and add them up. You add all the ones and that gives you forty. Then you add all the threes. So it’s forty-three, forty- six, forty-nine, fifty-two.” As is typical for students when computing mentally, Jennifer started by adding the tens. Even though she called them “ones,” her explanation showed that she knew they really were tens.

Bonnie then explained that to play, each pair of students needed a full deck of fifty-two cards and a container of Unifix cubes. “In this game, the number cards are worth one to ten, starting with the ace. The jack is worth eleven, the queen is worth twelve, and the king is worth thirteen.”

Using Weslie as her partner, Bonnie demonstrated as she explained, “First you shuffle the cards to get them mixed up, and then you deal out the deck. Then you each turn over a card.” Bonnie turned over a 6 and Weslie turned over a king.

“Next you decide who has more and then figure out how many more that player has. Weslie has thirteen and I have six. Who has more? How many more?”

Once the children figured this out, Bonnie said, “Since Weslie’s card is worth seven more than mine, she gets to take seven cubes.” Weslie did this. Then Bonnie and Weslie played several more rounds, each one snapping her cubes into a train.

“When you finish playing all of your cards,” Bonnie continued, “you each count how many cubes you have in all and record that amount. Then you find the difference between your scores. After recording game one, you play again and record your scores. Your last job is to figure out the total scores of each player from both games.” She demonstrated the recording procedure on the board as if she and Weslie had completed two games. The children helped her figure the totals.

Bonnie asked, “Did she win by more than ten points?”

“Did anyone figure out the difference another way?” Bonnie asked.

“I just knew that twenty-one to thirty-four was thirteen,” Kenneth said. “And since they’re both hundreds, it doesn’t change anything.”

Bonnie believes that children construct their own meaning for problems that are presented in the classroom. She allows time for students to verbalize their thinking to the whole group. Listening to others’ strategies for solving problems allows students to realize that there are many ways to look at a problem.

The children went back to their tables and played The Game of More.

Nicole described how she and Alvin used cubes to find the differences in their scores.

Using 100 as a landmark number, Francesca and Gale began with adding 28 to 100 and then subtracting 6.