A Lesson for Fifth and Sixth Graders 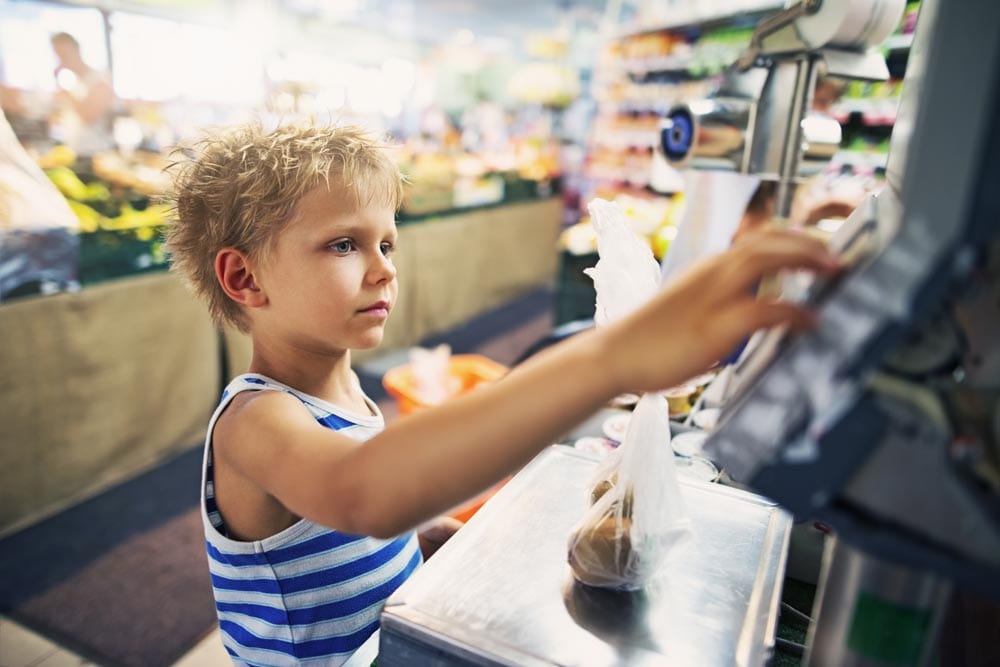 Money is a useful model for helping students make sense of tenths and hundredths, but students often have difficulty extending their knowledge to make sense of thousandths and ten thousandths. The Lobster Problem presents students with a problem-solving experience that helps them learn about extending decimals beyond hundredths and provides them practice with identifying decimals that come in between other numbers. The lesson appeared in Carrie De Francisco and Marilyn Burns’s Teaching Arithmetic: Lessons for Decimals and Percents, Grades 5–6 (Math Solutions Publications, 2002).

Marcus said, “There’s nothing in between. Fifty-seven–hundredths comes right after fiftysix–hundredths.” No one had a different idea.

Shannon answered, “The lobster could weigh two and a half pounds.”

“Could it weigh anything else?” The room was quiet.

“What if the scale registered the lobster at a weight between two and one-half pounds and three pounds? How much could the lobster weigh then?” Still there was no response.

I changed the question again, this time using a context that was more familiar. “Suppose that Matthew had more than two dollars and fifty cents, but less than three dollars. How much money could Matthew have?”

“What do you mean by ‘anything in between’?” I asked.

“Does anyone have another way to answer my question?” I asked.

I then asked, “Is two dollars and ninety cents the most Matthew could have before exceeding three dollars?”

Luis explained, “You start with two-ninety and you keep adding cents until you get to the next dollar.”

“Can anyone explain it another way?” I asked.

“It’s like you have two dollar bills and nine dimes and if you add one more dime, you’ll have three dollars, but you can’t go over three dollars,” Maria responded. “So you need to add pennies or nickels to your ninety cents until you get close to three bucks.”

“What is the least amount of money Matthew can have?” I asked.

I continued, “So Matthew could have many different combinations of money between two fifty and three dollars just by adding pennies, or cents.”

The students seemed clear about this, so I presented another version of the lobster question. “What if the digital scale registered the lobster at a weight between two and five-tenths pounds and three pounds? How much could the lobster weigh?” On the board I wrote:

I continued, “With your partner, think about our discussion about money. Decide if there could indeed be measurements between two and five-tenths pounds and three pounds and, if so, discuss the possible weights of the lobster.” The students began to discuss in pairs. Many students felt that the lobster could weigh anywhere between 2.51 pounds and 2.99 pounds, much as Matthew could have had any amount of money between $2.51 and $2.99.

I then brought the students’ attention back to the original question. “According to a grocery’s digital scale, a lobster weighs more than two and fifty-six–hundredths pounds but less than two and fifty-seven–hundredths pounds. How much do you think the lobster weighs?” I pointed to the board where I had written 2.56 lb. and 2.57 lb. “Brainstorm with your partner possible weights in between these. Make sure you both agree on the numbers you come up with, know how to say them, and are able to explain your thinking.”

Several pairs of students tried to make a connection between money and weight but quickly realized that there isn’t anything smaller than a penny in our money system. Many students were able to make the assumption that they could add another decimal place behind the last number as they had done when the lobster weighed more than 2.5 pounds — 2.561 or 2.562 pounds, for example. However, they were having difficulty reading the possible solutions.

To help students read their decimals, I listed three decimals on the board:

“Let’s read the first number on the board aloud together,” I said. The students did so easily. I repeated this for the second number, and again the students were able to do this.

“What about the last number?” I asked. “Any ideas?”

“You’re right. Now what about the ‘something’ part?” I asked.

“I remember,” Jenny said. “When we had the big cube be one, then the little cube was one thousand.” Jenny remembered our earlier exploration with base ten blocks.

“One-thousandth,” I corrected, emphasizing the that the end. I wrote on the board:

“So if you put together what Luis and Jenny said, the number is two and five hundred sixty two–thousandths.” I also wrote the number on the board using words to help students who find it easier to learn by reading than by listening.

We read the number aloud, and then I asked the students for solutions to the question about the in-between weights. As students called out answers, I wrote them on the board. Most agreed that the least the lobster could weigh was 2.561 pounds and the most it could weigh was 2.569 pounds.

Then Blaire asked, “Couldn’t the lobster have a lot more weights than that?”

Blaire said, “I think this can go on and on.” When Blaire wrote the numbers in a column and then added the digits from 1 through 9, it opened up for the others a new way of thinking about decimals.

“Does anyone have an idea about how to read the first number in Blaire’s list?” I asked.

Madison said, “If you follow the pattern, then you do ten times thousandths, but I don’t know what it is.”

“How would you read the number?” I asked.

I said, “Listen as I read the first number.” I pointed at each digit in 2.5611 as I said, “It’s two and five thousand, six hundred eleven–ten thousandths. When you have four digits after the decimal point, the number refers to ten thousandths.”

Isaac asked, “So what’s the answer? What can the lobster weigh?”

“What do you think?” I replied.

“I don’t think there’s one correct answer,” he said. “I think there are tons of answers.”

To end the class period, I gave a homework assignment. I said, “Think about what we discussed today and decide if you agree with Isaac and Blaire. Answer this question.” I wrote on the board:

Are there an infinite number of possible weights between 2.56 lbs. and 2.57 lbs.? Explain your thinking and give examples.

(See Figures 1–3 on the following pages.)

Figure 1. Justin agreed with Blaire and was clear about the infinite number of weights between 2.56 lbs. and 2.57 lbs.

Figure 2. When asked to write, Luis showed that he didn’t understand Blaire’s explanation.

Figure 3. Matthew wrote that there are weights between 2.56 lbs. and 2.57 lbs., but his examples showed his lack of understanding.