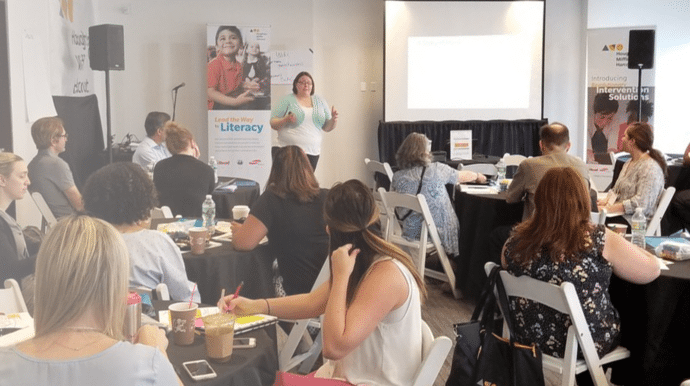 What assumptions might teachers or administrators make about students in their K-12 school districts? How might making these assumptions have unintended negative consequences?

These questions and others were the foundation of a keynote speech from Math Solutions professional learning expert Nicole Bridge at the HMH offices this summer. K-12 teachers and administrators attended the professional development event, with K-5 and 6-12 teachers then dispersing into separate breakout sessions.

Bridge defined the terms “assumption” and “narrative”—the former being something that’s accepted as true or that will happen without proof, and the latter being a representation of a situation or process in a way to conform to overarching aims or values. She drew on examples of assumptions and narratives from history, films, and personal experiences.

The problem with making assumptions—even if the overall intent is positive—is that they can still result in decisions or policies that harm certain populations, Bridge said; constant exposure to perspectives similar to your own distorts your worldview. “This shows up in our schools, when we hear things about which parents care about education and which ones don’t,” Bridge said.

“Even a narrative built from positive assumptions can flatten someone’s experience,” she added.

Teachers were asked to discuss amongst themselves what narratives they often hear in their school districts about student capacity and ability, home life and parental support, technology, and mathematics.

One common narrative, Bridge said, is that some students don’t succeed in high-level math classes because they don’t know their math facts. But this narrative primarily benefits those students who are better at memorizing information and not those without fast recall. For instance, one student may know the answer to 7 x 4 offhand; another student who doesn’t may remember that 7 x 2 equals 14, and then double that to get the answer.

A way to reframe this narrative would be to say that even students who aren’t good at memorization can do higher-level math drawing on what they do know. In other words, facts are just one tool to help students make sense of the world—not the goal in and of itself, Bridge said.

“If I’m only looking through the lens of my experience,” Bridge said, “I might be flattening who [students] are and missing huge parts of their humanity.”

“Make the people in this room today your partners in challenging assumptions and unpacking them,” Bridge said.

Learn more about how you can inspire a culture of math achievement in your school or district by previewing our instructional practices inventory.