A Lesson for Sixth Graders

As part of a unit with sixth graders on decimal number sense and computation, Carrie DeFrancisco taught her students several calculator games, all variations of the mathematical game of Nim. For each game, students played against partners, using one calculator for the two of them. These calculator activities encourage students to use logical reasoning skills and also give them practice adding and subtracting decimals. Prior to these activities, Carrie’s students had used base ten blocks and hundred grids to explore decimal place value to the thousandths place, and they were beginning to compute with decimals. Following are four versions that Carrie taught. 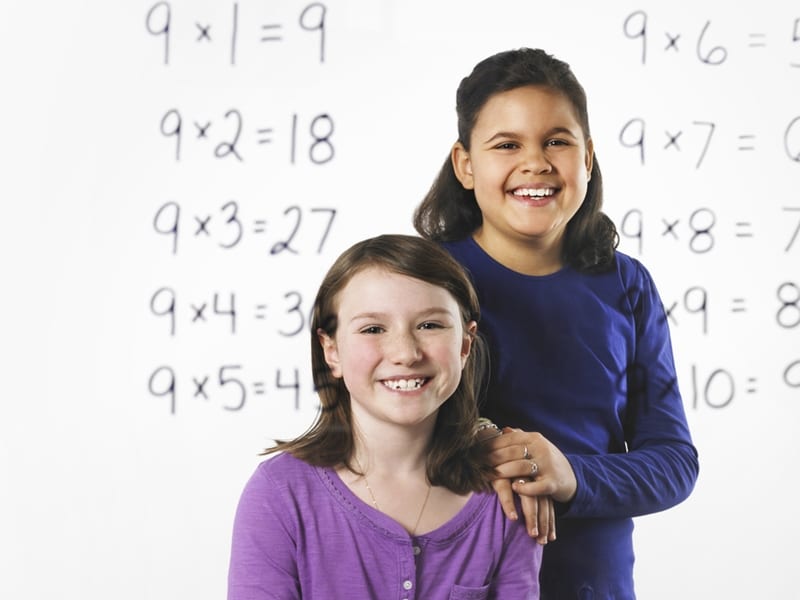 I began by introducing the class to one version of the game Race to One. I explained the rules, “To play this decimal game, you first clear the calculator so that the display reads zero. Then, taking turns, each player adds either one-tenth or two tenths to the total on the display. The winner is the player who makes the calculator display reach exactly one whole.”

I realized that these were a lot of directions for the students to absorb, so I said, “Let’s play one game together, the class against me. I’ll go first.”

I entered “.2” into the overhead calculator and asked, “Would you like to add one-tenth or two tenths?”

“Let’s add two tenths,” Pete suggested. I pressed the addition key, then “.2,” and then the equals key.

“What number is on the display now?” I asked the class.

“How about one-tenth this time?” Maria proposed. I did the addition on the overhead calculator. “What does the display read now?” I asked.

“No!” Justin said. “Let’s enter one-tenth. If we add two-tenths to seven-tenths, that will put nine-tenths on the display and then Mrs. De will win.”

“Yeah, but if we put in one-tenth then she will have only eight-tenths,” said Nico.

“Yeah. Let’s play again, but this time we’ll go first,” responded Pete.
We played again and this time the class won, a lucky victory. The students hadn’t yet had
enough experience to figure out the logic of the game.

I said, “Now you’ll play this game with your partner. Play at least ten different rounds, keeping track of who won each time. As you play, think about strategies for winning this game. Is it just luck? Does it matter who goes first? If you think you have developed a foolproof method for winning, test it out as you play against your partner. Does it work every time? Why or why not?” The students eagerly began playing.

Interesting conversations erupted around the room. Many students insisted on going first,
convinced that this was the winning secret. Jose looked extremely frustrated while Jon, his opponent, was calmly sitting back in his chair with a slight grin on his face. “What’s the matter, Jose? You look frustrated,” I asked.

“No matter what I do, he wins. I’ve got seven-tenths on the calculator and I know no matter what I press now, he is going to win again.”
I turned to Jon and asked, “Is there a method to your madness?”

He calmly responded, “Yep!”
When the students were finishing up their games, I called attention to Jose’s dilemma. “Jose is very frustrated,” I said. “No matter what he does, Jon always ends up winning. Is there anyone else who is having this same problem?” Several hands went up.

“Jon seems to think he has a winning strategy. Is there anyone else who thinks he or she has developed a winning strategy?” Several more hands went up.
“Does it matter who goes first?” I probed.
“Yes,” answered Patty. “Every time I go first, I win.”
“No, it doesn’t,” replied Caroline. “I let Shari go first every time and I still won.”

I said, “Jon’s idea is a good one, but there’s more for you to think about.”

The students returned to playing the game, and many tried Jon’s strategy.

Some were successful at times, but no one could win consistently. The class continued to play the game and I encouraged them to continue thinking about what was essential for a winning strategy. After the students had played a few more rounds of the game, I asked them to share some of their observations.

“When I could get the calculator display to seven-tenths I won, but I wasn’t always the first one to get to that point,” said Maria.

“Did you figure out a different strategy for winning the game?” I asked.

“If I go first, I want to enter one-tenth,” replied Maria.

“Explain your reasoning,” I requested.

“If I enter in one-tenth then my opponent can either press one-tenth or two-tenths bringing the number to two-tenths or three-tenths. I then would enter a decimal that would get my number to four-tenths. Jon’s strategy worked if you could get to seven-tenths. The trick is to make sure you are the player to reach seven-tenths first. In order to do this, you really need to be the first person to get to four-tenths.”

“You said if you go first to enter in one-tenth so you can get to four-tenths first,” questioned Kenny, “but what if you don’t go first?”

“I don’t think it really matters if I already know I need to be the first one to get to four-tenths,” replied Justin. “Whatever my opponent enters in first, you can just add to it to get the number to four-tenths first.”

“What if your opponent goes first and enters one-tenth?” asked Kim.

“Then I would enter one-tenth as well and hope she doesn’t know the secret. If she doesn’t know the strategy and enters in two-tenths as a wild guess, I would keep entering one-tenth hoping to be the first person to reach four-tenths or seven-tenths. Once I get the calculator to either of those numbers, I know I’ll win,” answered Justin.

After the students had played the game for a while and had a chance to explore the strategies discussed, I introduced three other versions: Race to Two, Race to Zero, and Decimal Target. Not all of the students were clear about the winning strategy for the original game, Race to One, but I felt that variations would keep their interest while providing them new insights. Also, the new games varied the decimal skills they were practicing.

Race to Two is played exactly the same way as Race to One, except that the winner is the player who makes the calculator display reach exactly 2. The rules for Race to Zero are similar to the first two versions, except the students start with the number 1 on the display and subtract instead of add. The winner is the player who reaches exactly zero. For the third game, Decimal Target, the students roll a die and the number that comes up is the target number. The students could then add one of six possible numbers — .1, .2, .3 .01, .02, or .03 — trying to reach the target number.

I ended the math period by having the students write the rules to each of these games in their math journals. For homework, they were to play each of them against a parent, a sitter, or a sibling. I told them, “By the end of the week, try to formulate a winning strategy for each game to share with the class.”

After reflecting on how these activities went in the class, I realized I might have placed too much emphasis on developing a winning strategy. Even though the calculator games involved tremendous opportunities for logical reasoning, evidenced by the students who devised effective strategies for the versions, my main objective was to use the games to introduce students to adding and subtracting decimals mentally. Several of the students who didn’t develop a winning strategy, or didn’t completely understand the strategies created by their classmates, focused more on the fact they didn’t understand the strategies than on how they were quickly and effectively adding and subtracting tenths and hundredths mentally. While I was pleased and felt my main instructional objective had been met, these students did not feel successful. In the future, I need to put more emphasis on the importance of mental calculations as one effective strategy for being successful at these games and less emphasis on developing winning strategies.