Line Segments on the Geoboard 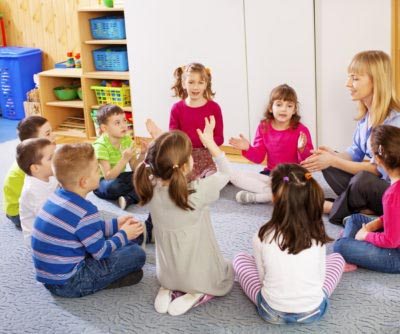 Geometry comes to life in this lesson, as Rusty Bresser has fourth graders use geoboards to explore making pairs of line segments that touch exactly nine pegs, record them on dot paper, and label them as parallel, intersecting, or perpendicular. Rusty is the author of the new book Math and Literature, Grades 4–6, Second Edition (Math Solutions Publications, 2004).

Robin Gordon’s fourth graders had been studying geometry, and I visited the class to provide them with an additional experience. The students watched attentively as I switched on the overhead projector and showed them my clear plastic geoboard and two geobands.

“Today we’re going to use geoboards in our math lesson,” I told the students. “Since you haven’t worked with geoboards yet this year, I’m going to give you about five minutes to explore and see what sorts of shapes you can make.”

I directed one student from each table to get one geoboard and two geobands for each student at the table. As soon as the students received their materials, they got to work.

After five minutes, I interrupted them and gave a new direction: “Now I’d like you to come to the rug area, but I want you to leave your geoboards and geobands at your table. We’ll use them later in the lesson.”

Once everyone was seated on the rug, I said, “I know that you’ve been studying geometry lately. One of the things you’ve learned about is lines. Think about what you know about lines and then turn to someone sitting next to you and take turns sharing what you know.” After a couple of minutes, I called them back to attention and elicited ideas.

“They go on infinitely,” said Brandon.

I drew a line on the whiteboard like this:

“When mathematicians draw lines, they add something,” I began.

“That’s correct,” I said, adding arrows on each side of the line I’d drawn:

“The arrows mean that the line goes on forever, or infinitely, in both directions and in a straight path,” I said. “What else do you know about lines?”

“When two lines intersect, they can be perpendicular,” said Dana.

“Can you come up and show us?” I asked. Dana drew two lines on the whiteboard:

“These lines intersect because they have a point in common,” I said and then drew a dot where the lines crossed. “What makes them perpendicular?” I asked.

“What else do you know about lines?” I asked.

“What do mathematicians call it when lines cross one another?” I asked.

“Intersect!” several students exclaimed. I wrote the word intersect on the whiteboard and pointed to where Dana’s lines intersected.

“Some lines have a beginning point and then they go on forever in one direction,” said Hernan. I drew on the whiteboard what I thought Hernan meant. Hernan nodded to show his agreement.

“What do mathematicians call Hernan’s idea?” I asked the class.

I wrote the word ray next to the drawing and explained, “A ray has one endpoint and extends infinitely in one direction.”

“Anything else you know about lines?” I probed.

Nina added the last idea. “There are lines that have two endpoints,” she said. “I think it’s kind of like part of a line. Line segments!”

“That’s correct, Nina,” I confirmed. “A segment is part of a line that has two endpoints and a definite length.” I wrote line segment and drew an example for students to see:

To introduce the problem that the students would explore, I held up a geoboard for the class to see and stretched a geoband around the five pegs in the second row.

I said, “Talk with your neighbor about why I can show an example of a line segment on my geoboard, like this, but not of a line or a ray.” After a moment, I called the students to attention and talked with them about how the pegs are always endpoints, so they don’t allow us to show a line or a ray because each has an infinite length.

Next I said, “Now I’m going to use another geoband to show two line segments on my geoboard. See what you notice about the line segments I make.”

After a moment, I called on Enrique. “They have two endpoints each,” he observed.

“They cross . . . I mean they intersect,” added Esmerelda.

I asked, “How many pegs do both line segments touch altogether?”

To verify, I touched each peg as we counted together. I explained, “When both geobands touch the same peg, you can count that peg only once.”

Next I explained what they were to do. “In a minute, you’ll make your own line segments on your geoboards back at your tables,” I said. “Your challenge is to make different examples of two line segments, but each time they should touch exactly nine pegs. When you have an example, copy it onto geoboard dot paper.” I held up a piece of dot paper for the class to see. To model recording, I quickly sketched a geoboard on the whiteboard and drew on it the two line segments I had made.

“After you draw a picture of your two line segments, write a description underneath,” I directed. I wrote the words intersecting line segments underneath my sketch on the whiteboard.

I then changed the position of the geobands, making a new design to be sure that the students understood that two line segments with a common endpoint are also intersecting. I showed the class my new design and then sketched another geoboard, drew what I had made, and wrote intersecting line segments underneath.

I said, “Do you think I did this correctly? Do they touch nine pegs? Is my label OK? Talk with your neighbor.” There was disagreement among the students about my label, and this gave me the opportunity to point out to them that as long as two line segments had a point in common, they were intersecting.

Finally, I made one more example on my geoboard—two line segments that were parallel:

I held up the geoboard for students to see. “What do you notice about these two line segments?” I asked.

“And they touch nine pegs, just like your other examples,” Charles added.

As with the other examples, I quickly sketched a geoboard on the whiteboard, drew on it the two line segments I’d made, and wrote parallel line segments underneath. “If these segments extended in both directions and became lines, they would never intersect,” I said.

I then explained, “When you return to your desk, use your two geobands and your geoboard to find as many different ways as you can to make two line segments that touch exactly nine pegs. When you find a way, copy it on your geoboard dot paper and then label it as I showed.”

As the students got to work, I heard them using correct math terminology (perpendicular, parallel, intersecting) to identify their pairs of line segments; they seemed excited and challenged by the task of finding as many different arrangements as possible. However, I noticed a few students recording line segments that touched fewer or more than nine pegs. I asked for the students’ attention.

As I watched the students continue working, I noticed that some had duplicate designs drawn on their papers. For example, Eduardo had drawn two parallel line segments on his geoboard dot paper. If he rotated that drawing, the line segments would be exactly the same as another design on his paper.

I decided not to call examples like these to students’ attention. Rather, I kept the focus on making intersecting, parallel, and perpendicular line segments and correctly labeling the designs.