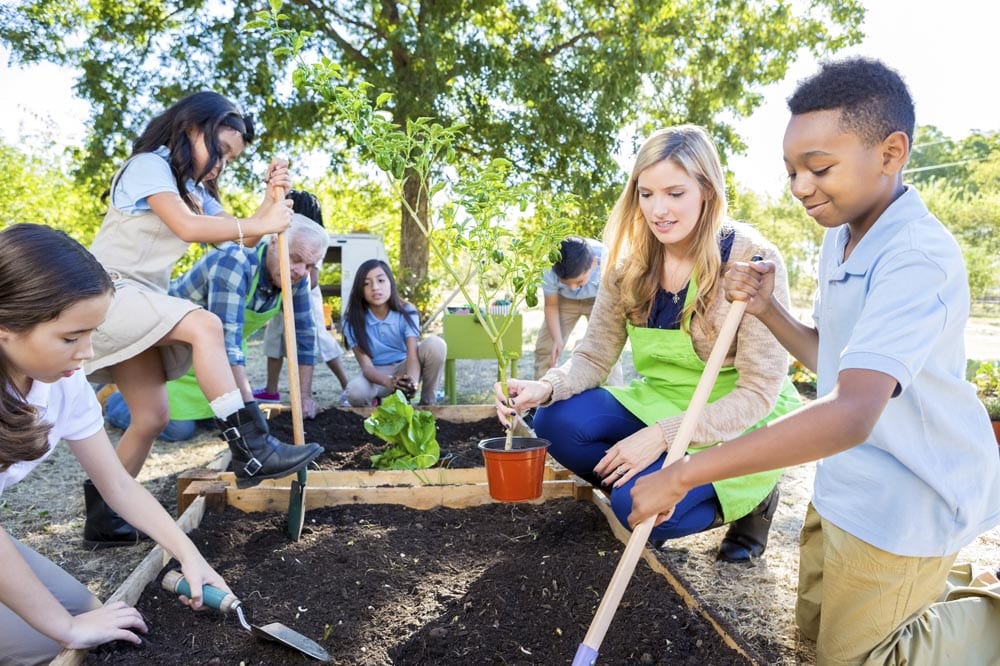 Ann Carlyle, a Math Solutions Inservice consultant, has been an elementary teacher in Goleta, California, for more than 30 years. She is the 1993 Presidential Award winner for Excellence in Mathematics Teaching and the 2000 recipient of the George Polya Memorial Award from the California Mathematics Council. Farmer’s Math grew out of her work in her kindergarten classroom.

Gardening provides young children with rich mathematical opportunities. Not only do students engage in counting, measuring, and collecting data when gardening, but they also have a wonderful time.

The gardening project in my kindergarten classroom began with a simple seed. We passed around a fava bean, which is similar to a lima bean, and imagined what kind of plant it would become. The children recorded their thinking in their journals. Then a child “started” the seed by wrapping it in a paper towel, keeping it moist in a plastic cup, and placing it in a sunny spot in the classroom.

Once the seed sprouted, which took about three days, we transplanted it in some soil and began to watch it grow and flourish. (If a classroom doesn’t have access to some soil outside, the seedling can be put in a planting cup.)

We took note of the seedling regularly, and the children recorded its progress in their journals. We first measured the height of the seedling with Unifix® cubes and recorded the progress of the sprout. We saved an original unsprouted seed, which was about one inch in length, and compared it to the length of the new seedling. Later we dug up the seedling, washed off the roots, took a total measurement of the roots, the seed, and the length of the shoot, and compared it to the unsprouted seed. We replanted the seedling and, once they appeared, counted the leaves. Eventually we counted the blossoms on the plant and the number of beans in a pod. Figure 1. We counted the blossoms on the plant and the number of beans in a pod.

As we watched the seedling grow, we read children’s books with a gardening theme to support the students’ understanding and interest. In Eve Bunting’s Sunflower House (San Diego: Harcourt Brace & Co, 1996), the characters are inspired to plant seeds in a rectangular arrangement, hoping that they will grow into a garden structure. Eventually the characters are able to go inside this house, a special place that came about through the careful tending of the seedlings by the children.

After our experience with the fava bean, we planted sunflower seeds and measured these dramatic plants as they grew. After a while, we found the Unifix® cubes to be too small for measuring, so we instead used Popsicle sticks. We cut a strip of adding machine tape the same height of the sunflower, placed it on a horizontal surface, and placed Popsicle sticks end-to-end along the paper tape. Also, we picked a large sunflower leaf and measured how many cubes fit around the perimeter. Then we counted how many cubes filled the area of the leaf outline. Figure 3. We compared plants and garden likenesses and differences.

Using a sample spoonful from a collection of seeds (a commercial packet of 15-bean soup works well here), we made a bar graph of the various kinds of beans. We compared one spoon sample to another sample to see how different or similar they were.

We compared plants and garden animals for likenesses and differences and recorded our thinking on a class Venn diagram.

We like to think of our classroom as a farm, where we grow plants and ideas. Our children are growing as well, and our gardening experience helps to nurture their growth.