This lesson from Stephanie Sheffield’s new book, Teaching Arithmetic: Lessons for First Grade (Math Solutions Publications, 2001) gives children concrete experience with the take-away model of subtraction. Using leaves they collect and pictures of trees they draw, children first solve several subtraction problems and then create their own to solve. 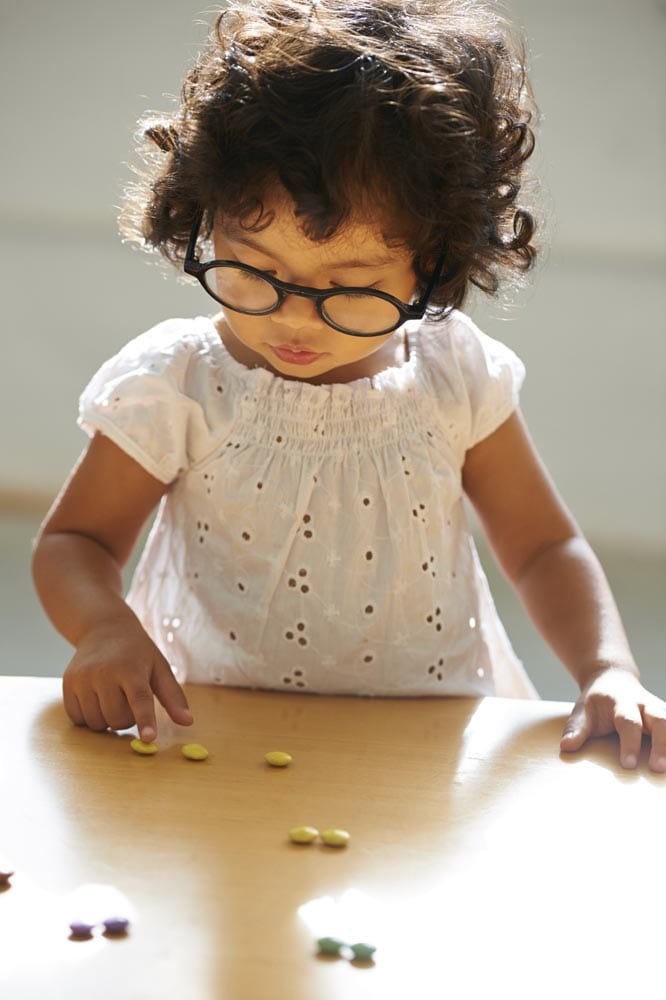 Before taking my class for a leaf-collecting walk, I distributed 9-by-12-inch drawing paper and asked the children each to draw a picture of a tree. “Don’t put any leaves on your tree,” I said. “We’ll collect leaves on the playground and you’ll arrange those on your trees.”

Before we went outside, I gave one last direction. “Collect at least twelve leaves, but no more than twenty.”

When we returned to the classroom, I settled the children at their desks with their tree drawings and leaves. I said, “Take twelve leaves and arrange them on your tree.” I waited for all of the children to do this.

I continued, “Now pretend that an autumn wind has come up and blown some of your leaves off the tree.” The children happily blew some of their leaves off their trees. Some fell on the floor, but most stayed on their desks.

“I’m interested in hearing how you decided exactly how many leaves you blew off your tree,” I explained.

Kurt spoke up first. “Mine was easy because I blew them all off!”

“What about you, Rick?” I said. “How did you figure out how many leaves you had blown off?”

He answered, “There were only two left, so I knew it had to be ten.”

“Like . . . five,” Chanell said with her hand in a fist. She continued to count, “Six, seven, eight, nine, ten, eleven, twelve,” unfolding one finger as she said each number. “That’s seven.”

I said, “OK, let’s all try it again. This time, start by arranging eleven leaves on your tree.” I waited until all of the children had done this.

I then said, “Now, along comes the wind again and blows some of the leaves away. This time, be sure that not all of your leaves blow away.” The students all blew some leaves off their trees.

I continued, “Before you count the leaves that you blew off, watch as I write a number sentence that describes what has happened so far. You had eleven leaves to start with.” I wrote 11 on the board.

When I first start helping students make meaning of addition and subtraction, I find it useful to have them focus on comparing the magnitude of the answer they’re looking for with the number they know. I do this simply by asking, “Will there be more or less than the number you started with?” This helps students focus on the action as combining or separating and relate it to addition or subtraction.

I addressed the whole class. “What kind of mathematical action is taking place when you blow some leaves off your tree? Talk to the person next to you about what you think.”

I knew that several children were already sure about this answer, but other children needed to think about it a bit. Asking children to talk to each other helps them clarify their thinking and gives them a chance to hear other ideas and modify their own.

Samantha reported for her and Jessica. “We think it’s subtracting because there were some leaves and some got blown away,” she said.

“We think that, too,” Andres said.

I wrote a minus sign after the 11. Then I pointed to the 11 and said, “You started with eleven leaves.” I pointed to the minus sign and said, “Then you blew some off. But I’m not sure yet how many leaves you blew off. When we don’t know what a number is, we can use a box instead. That tells me that there is a number in the sentence that is unknown that we have to figure out.” I added a box to the number sentence:

“Let’s look at Mickey’s tree again. How many leaves are still on your tree, Mickey?” “Four,” he answered.

“How can we figure out how many leaves Mickey blew off his tree?” I then asked. “It can’t be five, because that would only make nine,” Emily said.

“Ten would be too many,” Aaron added. “Ten plus four is fourteen and we only started with eleven leaves.”

“It’s seven!” Rick announced. “Six and four is ten, so seven and four is eleven. So it’s really just like adding.”

“Can you show us what you mean, Rick?” I asked.

Rick came to the front board and pointed to the box and the 4. “These two numbers have to add to this,” he said, pointing to the 11. I wrote a 7 in the box.

“So there are really two ways you could think about this,” I said. “You might think, ‘Eleven take away what is four?’ or you might think, ‘What plus four will equal eleven?’”

“Who had a different number of leaves left on the tree?” I asked. I called on Lauren. “I had five left,” she said.

“Watch as I record Lauren’s story,” I said. I wrote:

I explained, “Lauren started with eleven leaves on the tree. Then some blew away, but we don’t know how many yet. But we do know that what’s left on the tree after the others blew off equals five leaves.”

Then I asked Lauren, “So how many blew off? What number should I write in the box?” “I think it’s six,” she answered tentatively.

“Can you explain why you think that?” I asked. Lauren sat quietly, not sure how to proceed. I waited a moment and then said, “Would you like to ask someone for help?” Lauren nodded. Other hands shot up, and Lauren asked Emily.

Emily said, “Six and five is eleven. I know because five and five make ten, and that’s one too little.”

Andres had another way to explain. “You can count.” He said, “Five,” and then used his fingers to keep track as he counted up to eleven. “So it’s six,” he added. I wrote a 6 in the box.

After repeating what I had done for Mickey’s and Lauren’s problems for several other children’s problems, I said to the class, “Let’s try another problem. This time, start with thirteen leaves and again blow some away. Then write a number sentence to show what you’ve done, and figure out the answer.”

The students counted out thirteen leaves each and placed them on their trees. When they were ready, they blew away some leaves and began writing. As pairs of students finished their recording, I had them explain their work to each other, describing the actions they did and how the number sentences they wrote represented their leaf stories (see Figures 1 and 2). Figure 1. The five leaves Michelle had left were
easier to count than what she had blown off, so
she recorded 13 – ? = 5 first, then went back
and filled in the missing number, 8. Figure 2. Aaron saw the leaf-blowing situation
as an addition problem.