In this lesson from Marilyn Burns’s new book Teaching Arithmetic: Lessons for Introducing Fractions, Grades 4–5 (Math Solutions Publications, 2001), students are asked to identify fractions that are less than, equal to, and greater than a particular starting fraction. The lesson doesn’t rely on any contextual setting or use of concrete materials but rather draws on students’ reasoning abilities. Marilyn learned the activity from Nicholas Branca, who teaches at San Diego State University. 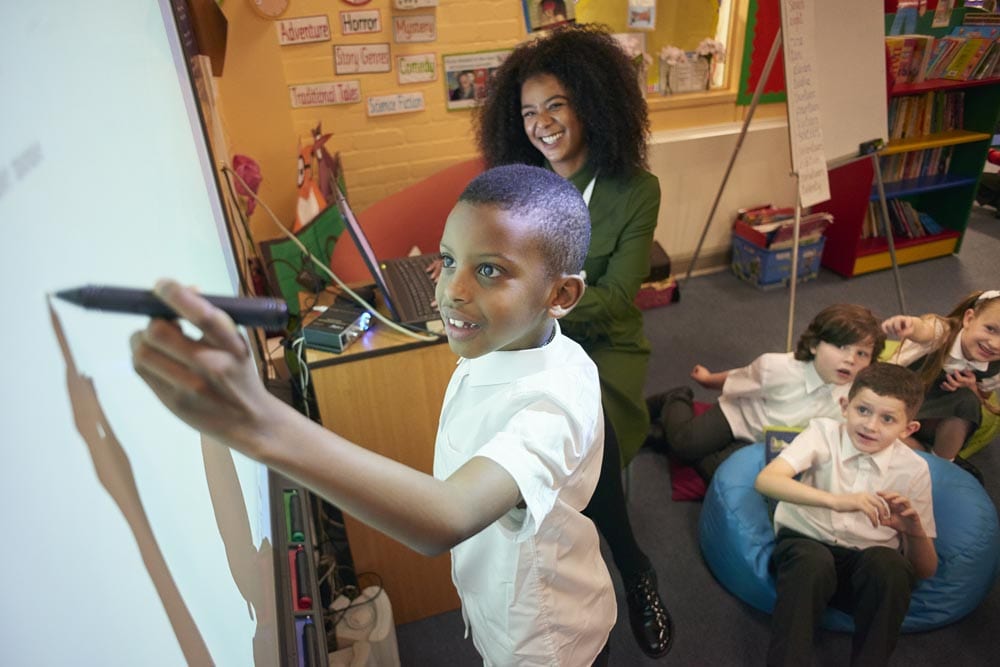 A few hands sprung up. I suspected that some hadn’t heard or didn’t understand my directions, so I repeated them to get more students involved. I pointed at the fraction I had written on the board and said, “You’re trying to think of a fraction with a numerator larger than three and a denominator larger than four. Raise your hand when you have a fraction in mind.” About half a dozen more hands were raised. I called on Josh.

“Yes, this follows my rule because the four is greater than three and five is greater than four,” I said. I called on other students and recorded the fractions as they offered them.

“Oh, I get it now,” Claire said and raised her hand. “Eight-eighths,” she said.

When I wrote 4/4 on the board, I didn’t have to correct him because Josh complained, “That doesn’t work. You can’t have a four on the bottom.”

Martin’s face reddened. “Can I change it?” he asked me. I reminded him that everyone could change his mind at any time in math class, as long as he had a reason.

Martin said, “Well, I need a bigger number on the bottom. I’ll say four-eighths.” I recorded this on the board.

I then asked, “How many fractions do you think there are that follow the rule?”

“How do you know that there are an infinite number of possible fractions?” I asked Andrew.

He explained, “Because you can always think of bigger numbers, and you can pair different numbers together.”

I then drew three columns on the board and labeled them <, =, >. I reviewed the signs and then pointed to the last column labeled with the “greater than” sign. I asked, “Who knows a fraction that follows the rule and also belongs in this column?” I waited until about half the students had raised their hands.

“It’s the same as one, and three-fourths is less than one,” she said with confidence. Several other students raised their hands.

“Who can think of a fraction for the ‘greater than’ column that’s not equivalent to one?” I asked.

Sam raised a hand. “Seven-eighths works,” he said. “I know that because three-fourths is the same as six-eighths, so seven-eighths has to be more.”

I continued by asking the class for fractions for the other two columns, each time having the student explain her reasoning for the fraction she identified. Then I repeated the activity using three-eighths and then one-fourth as starting fractions. I continued the lesson until only ten minutes remained in the period. Then I stopped to give the homework assignment.

To avoid confusion when they were at home, I duplicated the directions for the homework and distributed them to the class:

1.Rule three columns and label them <, =, >. Above the columns draw boxes for the numerator and denominator of the starting fraction.

4.Choose one fraction from each column and explain how you know it belongs there. For example, write: I know that is greater than because____________.

5. You may use only one fraction that is equivalent to 1 whole, such as 5/5 or 11/11 or any fraction with the same numerator and denominator.

6. If you think of a fraction that follows the rule, but you’re not sure in which column it belongs, write it to the side and bring it to class for a discussion of “hard” fractions.

I explained to the students what they were to do. I emphasized the fifth rule. “This is so you’ll have the chance to stretch your thinking beyond fractions that are equivalent to one,” I said.

The next day, I had students report about what they had learned from the assignment. (See Figures 1–3.)

Figure 2: As Libby’s paper shows, the game can provide experience with fractions greater than 1.

Figure 3: From his paper, Josh’s understanding of equivalence seems strong.

“Getting fractions that are bigger is easy,” Sam said. “You just have to use fractions that have a bigger numerator. Then it’s more than one, so you’re sure it works.”

“I rolled four-fifths,” Lily said. “But I thought it was too hard, so I rolled again.”

“Did anyone think of a fraction that was too hard to place in one of the columns?” I asked. No one reported having this problem.

“Let’s try the activity for one of your fractions,” I then said. “Raise your hand if you think that the fraction you rolled would be particularly interesting for the class.” Josh suggested three-fifths. I ruled columns and started the activity. We continued for about fifteen minutes. I then added Nicholas’s Game to our choice list and switched to another activity.