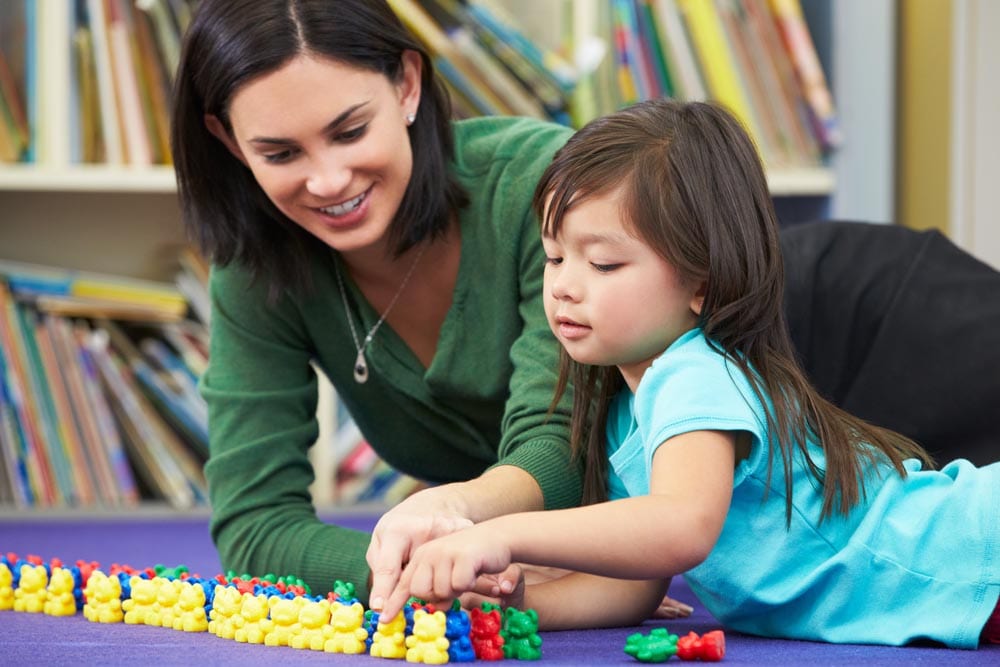 This lesson is from Marilyn Burns’s book Teaching Arithmetic: Lessons for Introducing Multiplication, Grade 3 (Math Solutions Publications, 2001), a revision of the Math By All Means: Multiplication, Grade 3 unit she wrote in 1991. This book presents five completely new whole-class lessons plus five new lessons in the Additional Activities section. Also, four children’s books, none of which appeared in the earlier book, are incorporated into lessons.

One Hundred Hungry Ants, by Elinor J. Pinczes, provides an engaging context for helping children relate multiplication to rectangular arrays and think about the factors of one hundred. In this children’s book, one hundred ants are hurrying single file in one long row to a picnic. Feeling hungry and worried that their progress is too slow, the littlest ant suggests that they reorganize themselves into two rows with fifty ants in each. The ants scurry into the new formation, but soon afterward the littlest ant stops them again, still worried that their progress is too slow and all of the food will be gone before they arrive. So the ants reorganize into four lines with twenty-five in each. Still dissatisfied, the littlest ant has them reorganize twice more, once into five rows with twenty ants in each, and finally into ten rows with ten ants in each. But all of this reorganizing is for naught — the ants arrive too late for any food at all!

After I read One Hundred Hungry Ants aloud, Tomas said, “The littlest ant didn’t have such a good idea.”

“He kept stopping them too much,” Sergio added.

“I liked how they all chased him at the end,” Jessica said.

After all the children who wanted to comment had the chance, I said, “Let’s talk about how the ants reorganized. When the littlest ant interrupted them the first time, how many rows did they get into?”

Aaron answered, “Two rows and there were fifty ants in them.”

I drew dots on the board to represent the action in the story, first drawing one row of one hundred dots and then two rows with fifty dots in each. I wrote next to what I had drawn:

“Who can explain why my multiplication sentences describe how the ants started and what happened when they reorganized?” I asked.

Jay said, “When they started, all of the ants were in one row, so it’s one times one hundred.”

Alicia said, “Two times fifty means two lines of fifty, and that’s what they did.”

“Then what happened in the story?” I asked.

“The littlest ant stopped them again and they got into four rows,” Sally said.

rows,” I said. After more than half of the children had raised their hands, I said, “Let’s say the answer quietly together.”

“Twenty-five,” they chorused. I drew dots to illustrate this configuration.

“What multiplication sentence can I write next to what I drew?” I asked.

“Can you finish the sentence?” I asked him.

Raul nodded. “You write ‘equals one hundred.’” I wrote on the board next to the four rows of dots:

I pointed to the arrays of dots I had drawn on the board and said, “The littlest ant organized the one hundred ants first into two rows, and then into four rows. Why didn’t he ask them to get into three rows?” I waited a few moments for the children to think and then called on Sally.

“Maybe he just skipped it so he could go faster,” she said.

Marea had a different idea. “There would be an odd number if they lined up, so you wouldn’t have equal groups.”

“When the ants were in four groups, there were twenty-five in each, and that means there was an odd number in each group,” I said.

“That was OK because they were equal,” Marea clarified. “They wouldn’t be equal with three lines.” Marea was using “odd” to mean “not equal,” a common usage of the word in the way that we use “even” to mean “the same.”

Jay said, “Thirty-three times three is ninety-nine, so one ant would be left over. It wouldn’t have a group so it doesn’t work.” I wrote on the board:

Lydia said, “The extra ant could be the leader in the front.”

Ruthie added, “That’s two thirty-threes and a thirty-four.” I wrote:

“What about if the littlest ant wanted each of the three rows to have the same number of ants in it?” I asked.

“So what happened in the story next?” I asked.

“He got them into five groups,” Jessica said. I drew a 5-by-20 array of dots on the board.

“You have to write ‘five times twenty equals one hundred,’” Kelly told me. I wrote on the board:

“They got into ten groups of ten,” Peter answered. “It’s ten times ten.” I drew the dots on the board and recorded the sentence.

“Why didn’t the littlest ant suggest that they get in six groups?” I asked. “Or seven, eight, or nine groups?” A few children were clear that there wouldn’t be equal groups, but others weren’t sure. Some children lacked the number sense to know how to think about one hundred in groups of six, seven, eight, or nine. Also, it’s difficult to visualize grouping one hundred. Rather than pursue this question in more depth, I switched to a smaller problem that I felt would be accessible to all of the children.

I then asked, “Could the ants reorganize into two rows and have an equal number of ants in each?”

“There would be five in each,” Tomas said.

“That’s two times five,” Aaron said. I recorded on the board, modeling for two rows the way I would soon ask them to organize their papers for another problem.

“What about three rows?” I asked, adding a 3 to my list on the board. Most children knew that

it wouldn’t work, but fewer of them were able to offer a reason.

“So what do you think about four rows for ten ants?” I asked Jay.

“It works for one hundred,” he said slowly, thinking. After a moment he added,

I turned to the class and asked, “Do you agree with Jay that you can’t organize ten ants into four equal rows?”

I drew two rows with four ants in each. “That takes care of eight ants,” I said, “and there are two extras, as Jessica said.” I drew the extra two dots and recorded:

I continued talking with the children about organizing ants into five, six, seven, eight, nine, and ten rows. Each time, I drew an array of dots and recorded a sentence to describe what I had drawn.

I then gave an individual assignment. “Now investigate how twelve ants might be reorganized into different numbers of rows, each with an equal number of ants.” I asked the children to organize their work as I had shown on the board for ten ants (see Figures 1 and 2).

Figure 1. Peter’s paper showed that he recorded that 2 multiplied by all numbers from 7 to 11 would result in more than 12 ants.

Figure 2. Tomas drew arrays for the larger numbers, as Peter did, but he also used subtraction to show the number of extra ants there were in each.