Up to One Million

A Lesson for Seventh Graders 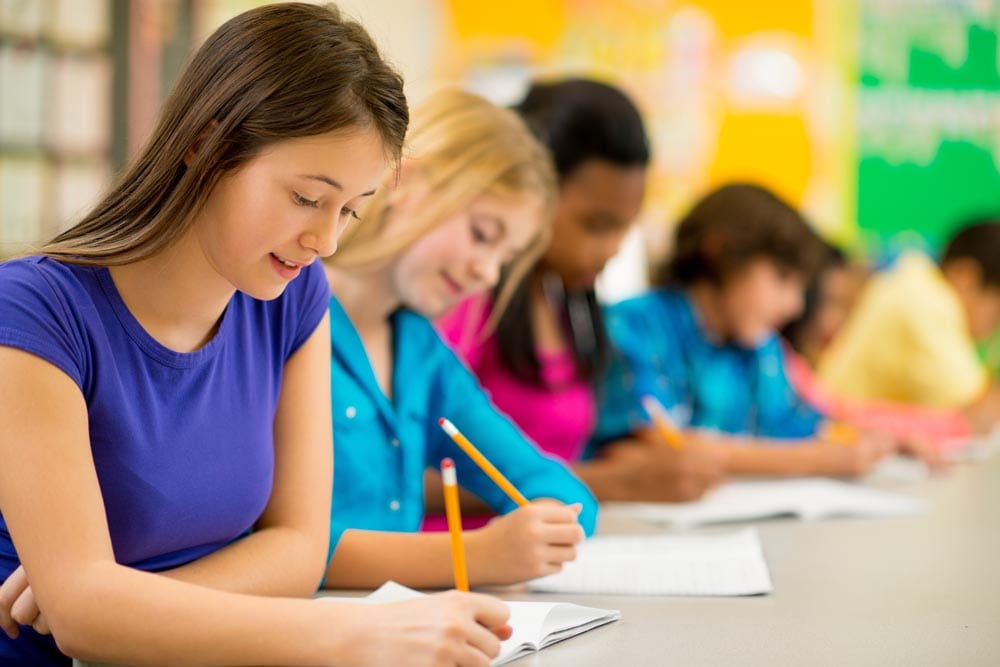 Annette Raphel taught this lesson to her seventh-grade students in Milton, Massachusetts. The lesson provided a meaningful way for her students to manipulate data, promoted the students’ number sense, and gave them much-needed experience with large numbers. At the end of the lesson, Annette includes a bibliography of children’s books that are useful for other lessons with large numbers. Annette is the author of Math Homework That Counts, Grades 4–6.

I gave the students more than a month to gather data and encouraged them to make appointments with people, sit down and explain their project, and then write a follow-up thank-you note to anyone who helped them compile data.

I gave the class a list of possible questions to help get them started:

How many times does the seventh grade breathe (collectively) in a day, a week, a school year, or a decade?

How many pieces of silverware are washed in the cafeteria each day, week, month, etc.?

How many days has everyone in the seventh grade been alive?

How many stairs are climbed by the seventh grade during the course of a day, a month, or a school year?

How many books are taken out of the library each week, month, or school year?

How many pounds, ounces, or grams do backpacks weigh?

How many napkins are used by the seventh grade during the course of a day, month, or school year?

I encouraged the students to be creative. About a week before the assignment was due, I took them to the computer room to show them how to type their information to display it: one number to a page with each number followed by what the number stands for and an explanation of how the calculations were derived.

The students’ work exceeded my expectations. They were vigorous about collecting data and fearless about making announcements at class assemblies, asking for information. Clipboards with a class list and questions at the top were circulated throughout the school. From collecting data on birthdays, to the time it takes to commute, to weights of backpacks, these students got the numbers and ﬁgured out how to multiply them out to get within the assigned ranges. Journal entries reﬂected on the data collection experience and questions that still could be asked.

Using ﬁshing line, we attached the sheets together at the top, sandwich-board style, and displayed them throughout the halls of the school (see Figure 1). They were the topic of much conversation!

Figure 1. Students were very creative in researching data about their school.

There are some wonderful books dealing with large numbers. The following annotated bibliography is a good starting point. (Most of these books are available at your local bookstore.)

An inventive tale of what could happen if every seed doubles, with some seeds allocated to purposes other than starting new plants, this book invites middle school students to consider exponential growth but has a somber ending.

This book presents a version of the traditional tale of doubling rice, one for each square on the chessboard, and includes a great mathematical chart at the back to help readers visualize how much rice that really is. The book deals with exponential growth and is one of four books on this list that stems from the same classical math problem. I pose the following to students: “On what day will enough rice arrive to feed everyone in this school?” I tell them that ﬁ rst they need to ﬁgure out what to ask — that is, what constitutes a serving and how many grains are in that serving. Next, they need to ﬁgure out how to get that information, and I ask if knowing how many grains are in a teaspoon or other small measure could help. I also pose follow-up questions: “How many days would it take until enough rice arrives to feed everyone in your state? In the United States?”

A version of the traditional tale of doubling rice, one for each square on the chessboard, this book is nicely illustrated, but other versions present the mathematics more explicitly.

Demi. One Grain of Rice. Scholastic.

Another version of the doubling-rice tale, in this case for each day in a month (powers of two), this book has a female heroine and does a nice job explaining the mathematics.

The book contains a million dots, with many of them annotated — for example, the 349,296th dot is the height of Mount Everest in inches, and the 952,453rd dot represents the number of non-Americans out of every million people in the world!

McGuffee, Michael, and Diane Gard. One in a Billion. SpanPress.

This book asks such questions as, What would it look like if you had a billion square centimeters and put them together? Where would they ﬁt?

Morgan, Rowland. In the Next Three Seconds. Pufﬁn.

This book presents lots of statistics about what is likely to happen in the next three seconds, minutes, hours, days, nights, weeks, months, years, decades, centuries, thousand years, and million years. The book includes directions for using math to make predictions based on facts that students ﬁ nd interesting.

This book is ﬁlled with good questions, such as: How many friends could eat 1000 french fries if a standard serving has 40?

Another book to help students get an idea of what big numbers mean, Big Numbers starts with one pea and imagines what would happen if the number of peas (and, as a basis of comparison, grains of sand) grew exponentially. The book introduces exponents, going to quadrillions, and talks brieﬂy about inﬁnity.

This is a wonderful compendium of interesting facts about numbers that is useful even though the references to measurement and money are British. There is a small section about large numbers.

This is a great mathematical alphabet book for middle school and may prompt a class to write its own. The book contains information on googol, googolplex, and a zillion (an idea rather than a number).

Schwartz, David M. How Much Is a Million? William Morrow.

The book poses questions such as: How many pages of little stars would make a million? A billion? This book helps increase students’ number sense.

Schwartz, David M. If You Made a Million. Pearson Learning.

This book poses questions such as: What are equivalent amounts to different quantities of money? Did you know that a million dollars in pennies reaches ninety-ﬁve miles high? A million dollars will buy how many yo-yos, houses, or items in magazines, newspaper ads, or catalogs?

Schwartz, David. On Beyond a Million. Doubleday.

In cartoon format, this book looks at larger numbers and exponents. Equivalence is stressed (a million is 106 and a thousand thousands) as well as what a number might mean in the real world. The book introduces googol, googolplex, and inﬁ nity.

Wells, Robert E. Is a Blue Whale the Bluest Thing There Is? Albert Whitman and Co.