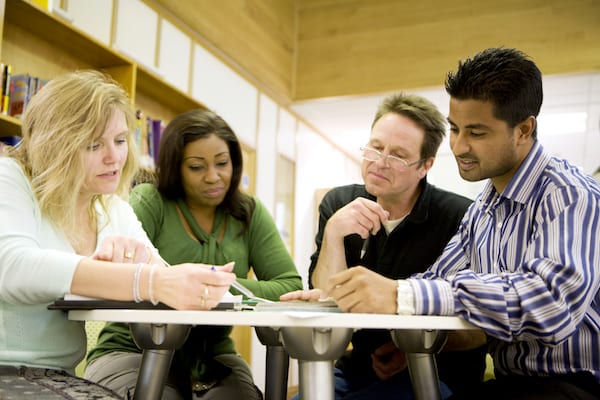 In their book, Good Questions for Math Teaching, Why Ask Them and What to Ask, Grades 5–8, Lainie Schuster and Nancy Anderson provide a rich collection of questions for teachers to use in math lessons. Asking questions helps make math lessons dynamic and thought provoking and encourages students to make important mathematical connections. The topics addressed in the book include number; proportional reasoning; geometry; algebraic thinking; data analysis and probability; and measurement. The following questions, four for grades 5–6 and four for grades 7–8, focus on fractions, decimals, and percents. Each question is followed by notes to the teacher.

Question: What story problem can you write that can be solved with this number sentence:

Having students write story problems can help teachers assess students’ understanding or misconceptions. It’s important to assess not only how students compute with fractions but also how they can interpret fractions and apply them to problem solving real-world contexts.

Question: If you add me to three-fourths, you end up with seven-eighths. What fraction am I? Explain your solution with words, a drawing, and/or a number sentence.

Lead a class discussion afterward so that students can share their answers and solution strategies.Students can think about this problem either as an addition problem or as a subtraction problem:

If students are having difficulty with one or the other of these representations, you might pose the question with whole numbers: If you add me to ten, you end up with seventeen. This is usually more accessible and can help students then think about the question with fractions. As extensions, pose similar riddles with decimals, or with fractions and decimals in one riddle.

Question: Using the digits 1 through 8, place one digit in each box to arrive at the least possible sum. Then repeat, this time trying for the greatest possible sum.

Afterward, have students compare their answers and explain how they made their choices. This question asks students not only to add fractions but also to consider relationships between the numerators and denominators when placing the digits. To make the question easier, arrange the boxes side by side, not as fractions, so that the students are creating and adding two-digit whole numbers. Or leave two of the boxes as a fraction and arrange the other two boxes as the digits of a whole number.

Find three different numbers for the denominators that will make this a true sentence. Can you find another set of numbers that will work?

Students most likely will use a guess-and-check procedure to get started on this problem. Also, some students will be convinced that this sentence will be false no matter what numbers they choose. When presenting this problem, you might begin by clarifying it. Write on the board:

Students will generally agree that this sentence is correct, but point out that it doesn’t answer the question because the three numbers used for the denominators aren’t different. (You used two 4s.) Then give students a chance to work on the problem. If they don’t make progress, you might show them a possible solution 1⁄3 – 1⁄4 = 1⁄12 and ask them to think about common denominators. Students will feel satisfied when they find a solution on their own, and they’ll get plenty of calculation practice in the search.

Question: I have a pile of color tiles. Two-thirds of the tiles are red. There are one-fourth as many yellow tiles as red tiles. The remaining tiles are blue. How many of each color could there be in this pile?

Put color tiles on students’ desks so that they can have a concrete model to help with answering this question. In the discussion of students’ answers, ask students what their answers have in common. (All correct solutions have the same number of yellow and blue tiles.) Ask students why they think this is so.

Question: Mark kept track of the number of times he scored a goal and the number of attempts during one practice session. At the end of the session, he said, “I made two and a half times as many shots as I missed.” What fraction of Mark’s attempts might have been goals?

Mark is comparing one part of his data with another. In order to answer the question, students must translate from this part-to-part comparison to one that compares a part with the whole. One possible answer is that Mark made fifteen shots and missed six, so that fifteen out of twenty-one shots were goals, or 15⁄21 .

Question: Louisa had to put a list of fractions, decimals, and percents in order from least to greatest. Her method was to translate all numbers into percents and put the percents in order from least to greatest. But she then forgot to write the numbers in their original form. What might the original numbers have been so that there was at least one fraction, one decimal, and one percent on the list?

Finding a solution to this problem requires students to convert percents to decimals and/or fractions. For the fractions, students may choose to convert the percents to fractions with denominators that are powers of ten. Push them to look further and investigate other equivalent fractions, such as ¾,4⁄5, 13⁄5 and so on. This can help students develop facility with some of our common fraction-decimal-percent conversions.

Related Publication:
Good Questions for Math Teaching: Why Ask Them and What to Ask, Grades 5–8
by Lainie Schuster and Nancy Canavan Anderson