In this lesson, fourth and fifth graders first solve the following problem: If a single serving of french fries has 40 fries, how many friends would 1,000 french fries feed? The problem gives the students an opportunity to think about one situation in several ways and to explore the connection between division and multiplication. The lesson in the book continues with a second problem. 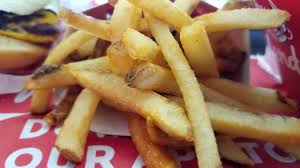 Before I began this lesson, I checked with a local hamburger restaurant and learned that there are about forty french fries in a single serving. I asked the class, “If a single serving of french fries has forty fries, how many friends would one thousand french fries feed?” I gave them a few minutes to think and then asked for their ideas.

“You could divide forty into one thousand,” Tina began.

I doubted that others, or even Mia, knew why her idea made sense, so I asked, “How many fours are there in one hundred?”

“Is that the answer to dividing forty into one thousand?” I asked Tina.

She shrugged. “I’m not sure. I didn’t figure it out yet.”

I knew that by removing a zero from both the 40 and the 1,000, Mia made a more manageable problem that was proportional to the original problem and, therefore, would produce the same answer. But this is a difficult concept for students to grasp. I recorded on the board:

“Who has another idea?” I asked. “Maybe we can check if twenty-five is right.”

“Are there any questions about how Abdul solved this problem?” I asked the students.

“Count by forties to two hundred,” I suggested. Mark did. “How many forties did you count?” I asked.

“Oh, I see, there were five forties and there are five groups of two hundred in one thousand. I get it now!” Mark said.

“Does someone have another way?” I continued.

“You can use division,” Jim said. He came to the board and wrote:

Then he used the standard algorithm to figure out the answer.

“Why did you use division?” I asked.

“What do you notice about Jim and Abdul’s work?” I asked the class.

“One used multiplication and the other did division and they got the same answer,” Carol replied.

“I can use multiplication to prove my answer is correct,” Jim added. “If I multiply forty by twenty-five I’ll get one thousand. This proves my answer is right.”

“I think they’re both right. They just thought about it a little differently. They got the same answer,” Becky said.

I then wrote a different problem on the board: Sam’s Burgers sells fries with 52 fries per bag. How many fries would be needed if everyone in our class ordered one bag of fries?

I explained to the students what they were to do. “You’ll each work independently to solve this problem. You may use any of the ideas on the board or that you have heard before that you think would help you solve this problem. You may also use your own ideas. Please be sure to show me your thinking clearly using words, pictures, and numbers.” The students got to work. I circulated and gave help as needed.

Later we had a discussion about the answer and the methods they used. Some children used the standard algorithm and I asked them to show me a second way they could solve the problem. Many made use of finding partial products in a nonstandard way. Having children work on an assignment like this during class gives me the opportunity to check on children’s understanding and evaluate if I need to redirect their thinking.

Josh also made use of finding partial products to solve the problem.