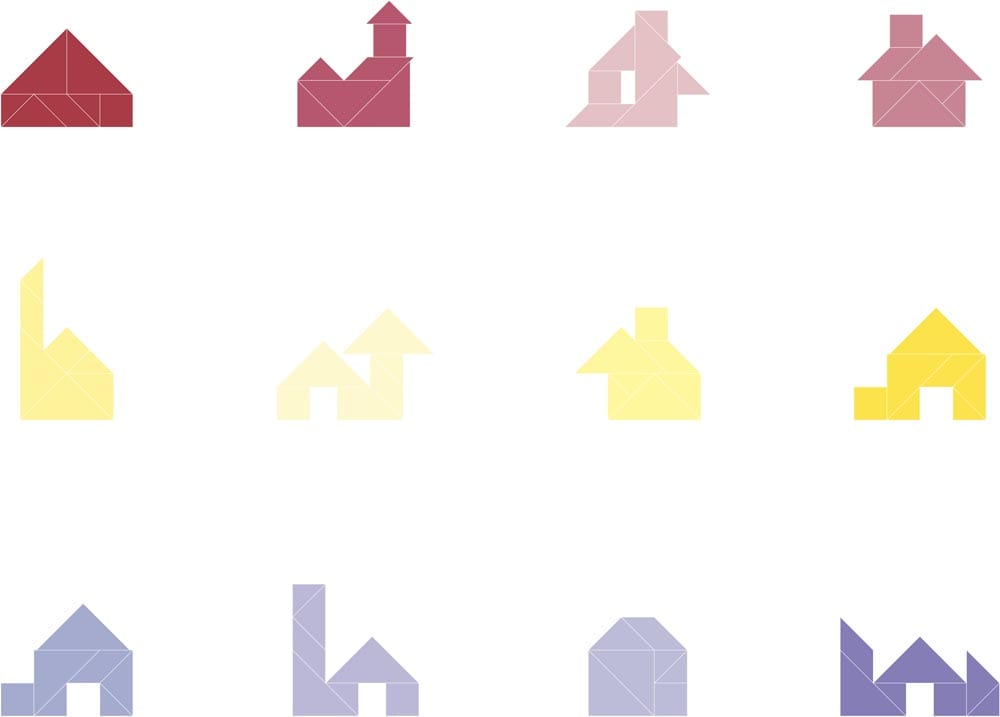 Vocabulary instruction is a large part of geometry instruction throughout the elementary grades. To learn geometric terms and their meanings, students need opportunities to interact with and use the language of geometry. In this lesson, Maryann Wickett used the experience of making tangrams as an opportunity to help a class of third graders expand their vocabulary.

Before the lesson, I cut out 6-inch squares of construction paper. I made one per student, one for me to use while modeling, and a few extras in case students made mistakes while cutting and needed to start again. I introduced the lesson by telling the story of the tangram that appears at the end of this article. As an alternative, you could read aloud to students one of the following books: The Tangram Magician, by Lisa Campbell Ernst and Lee Ernst (Harry N.Abrams, 1990), Three Pigs, One Wolf, and Seven Magic Shapes, by Grace Maccarone (Scholastic, 1997), or Grandfather Tang’s Story, by Ann Tompert (Crown, 1990).

As they shared, I recorded on a sheet of chart paper their mathematical language along with a drawing or a few words to help them remember what each term meant: square, polygon, and square corner. I pointed out to students that mathematicians refer to square corners as right angles. I also explained that a square is a special kind of rectangle; that is, all rectangles, including squares, have four sides and four right angles, but a square is a special kind of rectangle because its four sides are congruent, or equal. I wrote on the vocabulary list right angle, rectangle, and congruent. As I talked about the various geometric terms, I was sure to point them out and ask children where else they saw these concepts represented in the classroom. For example, I asked, “Where do you see right angles in our classroom?”

Alyssa said, “The corners of my book are square corners.”

I asked, “What do mathematicians call square corners?”

Keyan, Garrett’s partner, added, “It’s a rectangle, which means it has four sides and four right angles, but it is also a square, which is a special rectangle, because the sides are equal.” Using the language of geometry and listening carefully to others use it deepens learning, enabling students to remember it longer.

Then I held up my square and told students that they would be cutting their square into seven pieces to create their own tangram. I said, “The first cut will go across the square diagonally.”

I showed students what a diagonal is by moving my finger from the upper left corner to the lower right corner of my square. I explained, “There are actually two diagonals on a square.

Can you find the second diagonal?” After a few moments, hands were in the air.

Rya used her finger to show the second diagonal as she said, “It starts up here in the upper right corner and goes to the lower left corner.” Others nodded their agreement.

I showed students how to fold the square in half along a diagonal. As the students were doing this, I recorded on the vocabulary list the word diagonal along with a picture to help students associate the word with what it represents. I reminded the students to make a sharp crease by folding back and forth along the fold line several times. Then I asked, “What new polygon did you get when you folded along the diagonal?”

Katrina shared, “It has a right angle.”

“The two triangles match if you lay them on top of each other,” Neil explained.

Dante commented, “If they match, they are congruent.”

I summarized, “You have two congruent right triangles. It’s a right triangle because it has a right angle, like Katrina shared. Find the right angle and put your finger on it.” I quickly scanned the class to be sure students were able to do this. I continued, “Neil and Dante noticed that both halves when the square is folded are congruent; that is, they are the same size and the same shape. Because both triangles made by the fold match exactly when the paper is folded, the fold line is also a line of symmetry.”

Payal wondered, “If there are two diagonals, are there two lines of symmetry?” I took an extra square and folded it along the other diagonal and posed Payal’s question to the rest of the class.

Lilly explained, “The second diagonal is a line of symmetry, too, because when you fold it, both halves match exactly.” There are actually four lines of symmetry in a square, but to stay focused, I did not go further with that idea.

Finally, I asked the students to cut along the fold line. I added to the vocabulary list the words triangle, right triangle, and line of symmetry along with a sketch for each.

To make the next two pieces, I asked the students to set one of their triangles aside and then fold the other in half so that the acute angles matched.

I asked the students to name the kinds of angles that made up the new triangles they just folded. Olivia said, “They have two acute angles and one right angle just like before.”

Tennisen said, “The new triangles are congruent and they have the same shape as the big one; they’re just smaller.”

I said to Tennisen and the others, “When two polygons have the same shape but are different sizes, they are similar.” To review and reinforce, I asked, “Is the fold line a line of symmetry?”

The students nodded and Mitch explained, “Yes, because both sides of the fold match exactly when the paper is folded.” The students cut along the fold line while I added to the vocabulary chart the words acute angle and similar. To review, I asked the students to put their finger on the right angle of each of the triangles, then place a finger on the acute angles of each triangle.

I asked students to set aside the two smaller, congruent triangles and pick up the larger right triangle they had set aside earlier. As I showed them with my triangle, I told the students to match the acute angles as before, and make a complete fold in half. Next I showed the students how to hold the right angle and fold it so its vertex touched the halfway mark just made.

I said, “Reanna is right; it is a trapezoid and it could also be called a quadrilateral because it has four sides. All polygons with four sides are quadrilaterals, including rectangles and squares.” Seth moaned and said, “A square sure has a lot of names!”

I asked if there were any right angles or acute angles in the new polygons. Stephanie noticed that the trapezoid had two angles that weren’t right angles or acute angles. I explained these were obtuse angles. I asked the students to examine the three different types of angles and how they are the same and how they are different. The students cut along the fold line while I added to the vocabulary list vertex, trapezoid, quadrilateral, and obtuse angle.

I continued in this manner, folding and cutting the remaining pieces while introducing, using, and recording the vocabulary.

When students completed their seven-piece sets, I challenged them to put the pieces back together into a square. An extension to encourage the use and reinforcement of vocabulary is to sort the vocabulary words by categories; for example, polygon could go with square, rectangle, right triangle, trapezoid, and parallelogram. Right angle, acute angle, and obtuse angle could also be grouped together. Have students write the rule for each way they sort the vocabulary words. For additional extensions, see page 111 in About Teaching Mathematics, by Marilyn Burns (Math Solutions Publications, 2007).

Story of the Tangram, based on Chinese legend

Once upon a time there was a great, wise, and kind emperor who was beloved by all in his kingdom. To show their great love and respect for him, his subjects hired the greatest tile maker in the kingdom to create the most magnificent, beautifully decorated ceramic tile ever.

People from throughout the kingdom came to see the presentation of the tile to the emperor. The emperor was moved by this show of respect from his subjects. He thought long and hard about the perfect place to put the beautiful tile. His favorite spot in the world was his garden filled with flowers of every hue, huge shady trees, colorful birds, soft, cool grasses, and a waterfall. He decided that the garden was the only place for his tile. He set out one afternoon for his garden, gently carrying the tile with the greatest care. As he climbed the path to the garden, he tripped over a small stone and tumbled to the ground. So did the tile. As the tile hit the ground, it shattered into seven pieces, the same seven pieces found in a tangram. The king was overcome with grief. After a short while, he decided he must attempt to reassemble the tile. He spent the rest of his life working to reassemble the tile but was unable to do so. Wise men from all over came to assist, but none was successful. Will you be successful at putting the pieces back together to form a square?