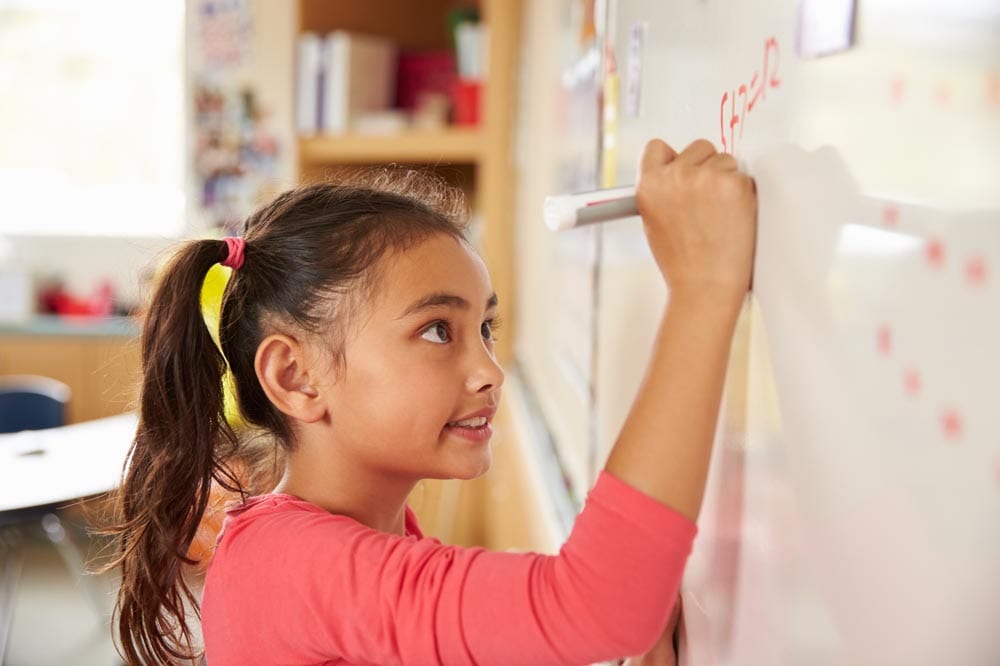 This activity, Looking at Data, is excerpted from Mini-lessons for Math Practice, Grades 3–5, by Rusty Bresser and Caren Holtzman (Math Solutions Publications, 2006). The book presents ideas for providing opportunities for students to practice the things they have learned, with practice defined broadly to include understanding as well as skill. In this instance, students practice what they’ve learned about identifying the median, mode, and range from data, which also provides them practice with computing and numerical reasoning.

I posed a question to the class in order to generate estimates that would become the data for our lesson. I had a mixed group of third through fifth graders, so I chose a question that would be accessible to the younger students while delivering some intrigue to the older ones.

“If I started at the front door and walked all the way around the perimeter of the school, about how many cars would I find parked on the street?” I asked.

Two sides of the school were bordered by streets. From the classroom window, students could see one side of the school’s perimeter lined with cars. Many started from there, counting the visible cars and using that number as a starting place for estimating. As individuals shared their estimates I used a thick, dark marker to record each on a sticky note. I arbitrarily slapped each sticky note on the board before taking the next estimate. (I chose to write the numbers myself in order to save time, but I have also done this activity by giving each student a sticky note and marker and having students record and post their own estimates.)

When we finished recording and posting the estimates, we had a board haphazardly filled with sticky notes. This “mess of numbers” became the source of a rich discussion about data.

“Hmm,” I said, “there are a lot of numbers up here. Look at them carefully and see if you can identify the lowest number and the highest estimate on the board.”

I gave the students a few moments to peruse the board and waited until many hands were raised. I called on Kellen, who told us 16 and 210. I checked in with the rest of the students to see if they agreed. After establishing consensus, I pulled the 16 sticky off the board and put it at the far left end near the bottom. Then I put the 210 sticky at the right side of the board.

“OK,” I said, “the rest of your estimates are between sixteen and two hundred ten. Those two numbers help us figure out the range. What is the range?”

I saw that some of the students were counting how many sticky notes were on the board instead of calculating the difference between the highest and lowest numbers, so I clarified my question. “I’m noticing that some of you are trying to figure out how many sticky notes are on the board. That will tell us how many pieces of data we have, how many estimates you made. But to find the range, you need to figure out the difference between our lowest and highest estimates, between sixteen and two hundred ten. The range tells us something about how spread apart our estimates are.” I recorded on the board the problem they needed to solve to find the range: 210 – 16.

This explanation helped the students get on track with what they had to do, but now I noticed that some students were struggling to do the arithmetic mentally. I told the students that they could work on the problem in their math journals if they liked. After a couple of minutes I called for their attention and asked who would like to tell us how he or she found the range. Here was a nice opportunity to have a brief number talk.

“It’s one hundred ninety-four,” D’andre announced. The class agreed with the answer.

“Because I just did two ten minus sixteen and that’s one ninety-four,” he explained. He held up his math journal to show that he had used the standard subtraction algorithm.

“Did anyone figure in a different way?” I asked.

“I added up,” Marsha announced.

“Tell us how you did that,” I encouraged.

“So how did you know the range was one hundred ninety-four?” I asked.

“Because I added four plus one hundred plus ninety, and that’s one ninety-four,” Marsha explained.

Since Marsha’s strategy might not make complete sense to students who had not used it or been exposed to it before, I decided to record it on the board to demonstrate her thinking for other students. I wrote:

Tina shared next. “I added and subtracted,” she said.

I realized this method called for a visual model as well. I wrote on the board:

“Great,” I said. “The range is one hundred ninety-four, which helps us know about how far apart your lowest and highest estimates are. There are some other things to look at that also help you analyze data and figure out what it all might mean. But as I’m looking at the board, I still see a big mess. Let’s put the numbers in order. We already have the sixteen at one end and the two hundred ten at the other. Who would like to help arrange the rest of the numbers?”

Many hands flew into the air. I called on Esteban and Paulina to come forward and rearrange the sticky notes. They got a lot of help from the rest of the class. I helped them by asking questions such as, “Which is the next higher number?” and “Are there any numbers between these two numbers?” I also showed them that when two sticky notes had the same number, they should put one above the other. It took them only about a minute to get the sticky notes in order. They did not place the numbers proportionally, with spaces left for missing numbers, but merely from least to greatest. Still, we were now able to think about the median and the mode.

“Now let’s find the mode. How can we tell what the mode is?” I asked the class.

“It’s the number you see the most,” Tina reminded us.

“So what is the mode?” I asked. Because sticky notes with the same number were placed one above the other, it was easy to see that one hundred was the mode because it had the tallest column.

“Now let’s see if we can find the median. How can we do that?” I asked.

“The median is the one in the middle,” Chip explained.

“So how can we tell which one is in the middle?” I wondered aloud.

“Start at each end and move into the middle,” Nicole offered.

“Hmm,” I observed, “there seem to be two sticky notes in the middle, not just one. I wonder what that’s about.”

“It’s because there’s an even number of estimates,” Miguel explained.

“Yes,” I agreed. “Does anybody know how we determine the median if there are two numbers in the middle instead of just one?”

There were universal looks of uncertainty, so I explained the mathematical convention to the students. “If you have an odd number of data, you can find the one that’s exactly in the middle, and that’s the median. If you have an even number, you take the two numbers in the middle and find the number that’s halfway between those two.”

Having told them the convention, I gave the students a few moments to determine that the median was 67.5.

“This information tells us more about your estimates than when we just had a messy bunch of numbers on the board,” I said. “If we went outside and counted the cars parked around the school, we could then compare the actual number to this information. Then, if we collected estimates on another day, when a different number of cars would most likely be parked, or on a weekend day when no one was in school, we’d have different estimates to use to figure our range, mode, and median.”