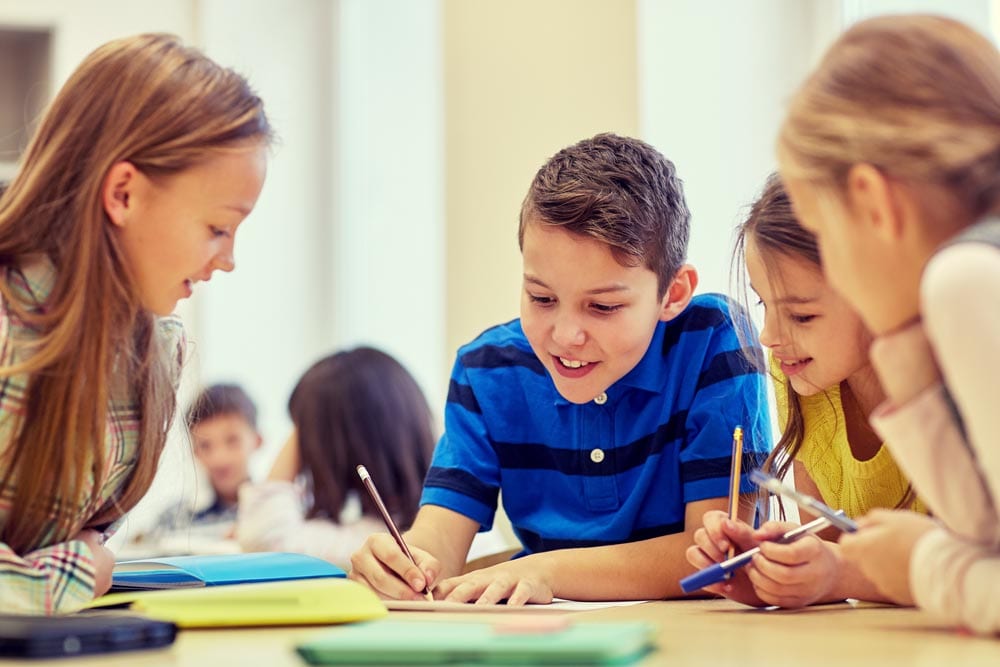 Maryann Wickett and Marilyn Burns’s new book, Teaching Arithmetic: Lessons for Extending Division, Grades 4–5 (Math Solutions Publications, 2003), builds on the concepts and skills presented in Teaching Arithmetic: Lessons for Introducing Division, Grades 3–4 (Math Solutions Publications, 2002). Their new book helps students calculate with multidigit divisors and dividends (using a method that makes sense to them!) and also deepens students’ understanding of divisibility, relationships between dividends and divisors, and the meanings of remainders. The lesson presented below teaches students a game that reinforces all of these goals. (Note: Other lessons in the book address speciﬁcally how to teach long-division skills. Also, if you are familiar with The Game of Leftovers from the ﬁrst division book, you’ll see here how to extend that game for older students.)

“Today I’m going to teach you Leftovers with 100,” I began the lesson. “To show you how to play, I need a volunteer.”

I chose Skylar and, as he walked to the front of the room, I wrote on the board:

I explained as I pointed to what I’d written on the board, “When you play, you and your partner will make one recording sheet that looks like this. Be sure to write both your names on your recording sheet.”

“This time I’m going to go ﬁrst to show what to do,” I continued. “Something important to remember is at the end of the game, both players add their remainders, and the player with the larger sum wins. The ﬁrst player starts with a start number, or dividend, of one hundred. Because I’m the ﬁrst player, I start with one hundred and I have to choose a divisor from the numbers listed from one to twenty. Then I’ll divide one hundred by the divisor I chose, and Skylar will record on our sheet. What divisor would be a good choice?”

Lucas explained, “If you want to win, then you have to choose a divisor that will give a big remainder.”

“What would be a bad choice?” I asked.

Lupe said, “One would be bad because one goes into all numbers with no remainder.”

“Ten would be bad,” Alberto said. “Ten time ten equals one hundred, so there wouldn’t be any remainder.”

“What number on the list would make a good choice?” I asked.

“Three,” Derek said. “With three there would be a remainder of one because if you count by threes, you land on ninety-nine, and that’s one away from one hundred.”

“Nineteen,” Zoe said. “It would have a remainder of ﬁve. Five times twenty is one hundred. Nineteen is one less than twenty, so I think ﬁve times nineteen would be ninety-ﬁve. One hundred minus ninety-ﬁve is ﬁve and that ﬁve would be left over.”

I recorded Zoe’s thinking on the board:

“I like Zoe’s idea of using nineteen as the divisor,” I said. “Since it’s my turn to pick a divisor and divide, Skylar will record on our recording sheet, ‘One hundred divided by nineteen equals ﬁve remainder ﬁve.’ Circle the remainder and write my initial since it’s my turn.” Skylar recorded:

I continued, “Before Skylar can have his turn, we have to do two things. He has to cross off nineteen from the list of divisors. We only get to use each number listed once in a game.” Skylar crossed off the 19. “Then we have to subtract my remainder of ﬁve from my start number of one hundred to create a new start number for Skylar to use.”

Skylar told me his start number was ninety-ﬁve, and the class agreed.

“Since it’s Skylar’s turn, I record,” I said. I wrote 95 under the Start Number column. Skylar looked overwhelmed, so I called on Kenzie for advice.

“If you use twenty as the divisor, then you can get a remainder of ﬁfteen. Four times twenty is eighty, and ninety-ﬁve minus eighty is ﬁfteen.”

Joey said, “Remember to subtract the remainder from ninety-ﬁve. Ninety-ﬁve minus ﬁfteen is eighty.”

“I agree,” I responded. “Since it’s my turn, Skylar gets to record.” He recorded 80 in the Start Number column.

“I’ll use your suggestion of eighteen,” I said. Skylar recorded on the board:

Johanna said, “Skylar has ﬁfteen and you have thirteen.”

Skylar decided to use eleven as his divisor. He said, “My dividend is seventy-two. So seventy-two divided by eleven is six with a remainder of six. I get a score of six.”

I recorded Skylar’s turn on the board:

“Sixty-six would be the next starting number,” Korina said, “because seventy-two minus six is sixty-six.” I agreed.

The students seemed to understand how to play and I wanted to give them ﬁ rsthand experience with the game, so I said, “The game ends when the start number is zero, but Skylar and I are going to stop here so that you can play. To ﬁgure out who is the winner, add the remainders.”

“Skylar has twenty-one and you only have thirteen,” Kerri said.

“I agree,” I said and wrote our scores under our recording to model for the students how to record their scores when they played:

“Why don’t you get started playing with your partners now?” I said, and I left the recording of the game between Skylar and me on the board as a model for the students.

After a few minutes, I noticed Sean and Lucas were involved in an intense discussion. Sean asked me, “Is it possible to have a remainder as big as ﬁfteen? I don’t think it’s possible, but Lucas does.”

“What’s the divisor in the problem you’re discussing?” I asked.

“It’s nineteen,” Lucas said. “I think as long as the remainder is smaller than the divisor, it’s OK because there isn’t enough for another group.”

I replied, “If the divisor is nineteen, then it’s possible to have a remainder of ﬁfteen.”

I noticed as I continued to circulate that Skylar and Sasha showed how they did the dividing and, after two rounds, changed their way of recording their work.

Figure 2. Skylar and Sasha changed how they recorded the game but showed their thinking clearly. While Sasha made an error when he multiplied 12 x 6, it didn’t affect the next start number.

Elli and Lupe recorded their division using another method.

Figure 3. Lupe made an error when she divided 40 by 11. However, it didn’t affect the next start number. Elli used scratch paper to show how she ﬁgured her answers.

After the students had played for a while, I asked for their attention.

“What did you think about the game Leftovers with 100?” I asked.

Zoe said,“Elli and I discovered something. At the end, you can get a lot of leftovers once the starting number gets below twenty. We got to thirteen as the starting number, and fourteen was left as a divisor, so I took fourteen and got all thirteen because thirteen divided by fourteen is zero with a remainder of thirteen.”

Kenzie said, “Beth and I ﬁgured that out, too, but not until the starting number was ﬁ ve. Then Beth ﬁgured out she could divide ﬁve by six and the answer would be zero remainder ﬁve, and she got the ﬁve.”

Beth said, “I have a question. Everett and Derek added up all their leftovers together and it came out to one hundred. When Kenzie and I added ours up, it was only eighty-eight. I don’t get it.”

I asked the class, “Why does it make sense that the total of both players’ remainders should total one hundred if you ﬁnish the game?”

Niki said, “If you start with one hundred, and you keep dividing until you get to zero, then the remainders have to add up to one hundred because the only way to make the starting numbers go down is to subtract out the remainders.”

I suggested to Beth and Kenzie that it was possible they had made an error somewhere and perhaps they needed to go back and check their work. They went to the back of the room to check their work together, and after a few moments blurted out, “We found the mistake.”

They reported on the subtraction and division errors they had made and commented on what they had discovered. “We discovered that if you look at the divisors that haven’t been used and try to think of a multiple of one of the divisors that’s just a little bigger than your dividend, or starting number, you can get a big remainder,” explained Beth. “For example, if your dividend is ﬁfteen and eight is a divisor you could still choose, it would be a good choice because the multiples of eight go eight, sixteen, and sixteen is just one bigger than ﬁfteen, so there should be a big remainder. There would be a remainder of seven for that problem.”

“We also noticed that the new start number is always the same as the whole number part of the previous quotient times the previous divisor,” Kenzie shared. “If you look at the board, you can tell. Look where it says eighty divided by eighteen equals four remainder eight. Four times eighteen is seventy-two, which is the next start number. In the top problem where it says one hundred divided by nineteen equals ﬁve remainder ﬁve, ﬁve times nineteen is ninety-ﬁve, which is the new start number.”

There were no other comments. Over the next several days, children continued to play when they had free time. It was wonderful to see them so happily engaged while getting practice with division.