A Lesson for Second Graders 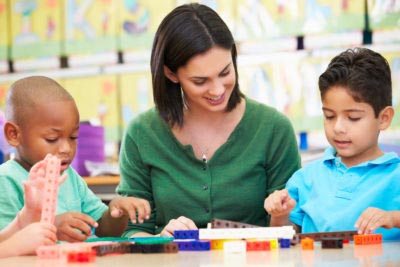 Bruce Goldstone’s book Ten Friends (Henry Holt, 2001) uses rhymes and illustrations to suggest different ways to invite ten friends to tea. At the back, he lists all of the ways to represent ten using two addends, three addends, and so on up to ten addends. Marilyn Burns read the story to second graders and then gave them the challenge of writing as many different number sentences as they could that showed different combinations of numbers that add to ten. This lesson appears in the new book Math and Literature, Grades 2–3, by Marilyn Burns and Stephanie Sheffield (Math Solutions Publications, 2004).

Marilyn gathered the second graders on the rug and showed them Ten Friends. Together the students counted the characters as Marilyn named and pointed to them—a fireman, a frog, a lobster, an elephant, a mouse, a baby chick, a cat, a rooster, a sheep, and an octopus.

Marilyn opened the book and read the first page aloud, which asks the reader to name the ten friends he or she would invite to tea. Several children raised their hands, interested in telling the class whom they would invite to tea. However, Marilyn signaled them to lower their hands and turned the page to continue reading the book. She showed them the next spread with the first possibility—inviting ten firefighters. Then she turned to the next spread, which shows nine grizzly bears and one friendly forest ranger. The next spread suggests eight tailors and two plumbers.

“Raise your hand if you think you know what numbers are on the next page,” Marilyn said. After most of the children raised their hands, she turned the page to reveal six ballerinas and four frogs.

“And what numbers will come next?” Marilyn asked. “Let’s say it together in a whisper voice.”

“Five and five,” the children said in unison. Marilyn turned the page to show five shepherds and five sheep.

“The next page is different,” Marilyn said. She turned the page and read, “Would you invite four scuba divers, three chauffeurs, and three bus drivers?”

“Are you all sure?” Marilyn asked.

“You can count them,” Elena suggested. As Marilyn pointed to the characters, the children counted to ten.

“How could we be sure without counting?” Marilyn asked. “How can we add up four and three and three?”

Cara said, “Four and three is seven, and three more is ten.”

Marilyn then said, turning the page, “Let’s see what combination of ten friends comes next.”Shown on the next spread are one quilter, two sweater knitters, three babies, and four baby-sitters. “Do these numbers add up to ten?” she asked. “Talk with your neighbor about this.”

After a few moments, Marilyn called the class to attention. All agreed that the numbers added to ten. Dan explained, “One plus two is three, and three plus three is six, and six plus four is ten.”

“Let’s see who gets invited on the next page,” Marilyn said. The next spread shows two each of teachers, trolls, tycoons, ventriloquists, and baboons.

The next spread shows the last configuration of guests—one prince, one painter, two potters, one diner, one miner, one major, and three otters. Again, the students verified that the six numbers added to ten. The book continues for a few more spreads, reviewing the characters presented in the book and asking how many there would be if all of them showed up. The last illustration in the book shows a 10-by-10 grid with all of the characters pictured.

Marilyn then introduced an assignment. “The book showed ten different combinations of guests to invite if you were inviting ten friends to tea,” she said. “One of the suggestions was to invite nine bears and one forest ranger. Watch as I write a number sentence that describes this.” On the board Marilyn wrote:

She then said, “Another suggestion was to ask eight tailors and two plumbers,” and she wrote on the board:

“Another suggestion was for five shepherds and five sheep,” Marilyn said. “What would I write for that?”

“And what do I write to show that this would be ten friends?” Marilyn asked. “Equals ten,” Celia said. Marilyn completed the number sentence.

Marilyn asked, “What number sentence would I write for one quilter, two knitters, three babies, and four baby-sitters?” She called on Charlie and recorded as he reported:

Marilyn then explained the assignment. “These are four number sentences with numbers that add to ten. Your job is to try to write as many different number sentences as you can that show ways to add numbers to equal ten.”

“Can we do subtraction?” Dan wanted to know.

“That’s a good idea, but not today,” Marilyn responded. “I’m interested in how many different combinations of numbers you can think of that add to ten.”

No other student had a question. Marilyn made two last comments. “Each of your numbersentences should use different numbers. For example, if you include the first sentence that I wrote—nine plus one equals ten—then you shouldn’t also write a sentence with the same numbers, like this.” She wrote on the board: 1 + 9 = 10. “You don’t need to write this sentence. It uses the same numbers, just in a different order.”

Marilyn made one more suggestion. She took ten tiles and placed them, equally spaced, in a line on the rug so that all of the children could see them. She moved the two tiles at the right end away so the tiles were now in two groups—eight and two.

“Which number sentence on the board do you think matches the way I’ve arranged the tiles?” she asked. It was obvious to the children that the sentence was 8 + 2 = 10. Marilyn then rearranged the tiles into four groups of one, two, three, and four tiles.

“Which number sentence on the board does this arrangement match?” she asked. Again, it was obvious to the children that the matching sentence was 1 + 2 + 3 + 4 = 10.

She then rearranged the tiles into three groups of three, four, and three. “What number sentence could I write for this arrangement?” Marilyn asked.

She then had the children return to their seats and begin working. As she walked around the room, she distributed ten tiles to each of them. “Do we have to use them?” Manuel asked.

“No,” she responded. “But I’ll just leave them here in case you decide that they would be helpful.”