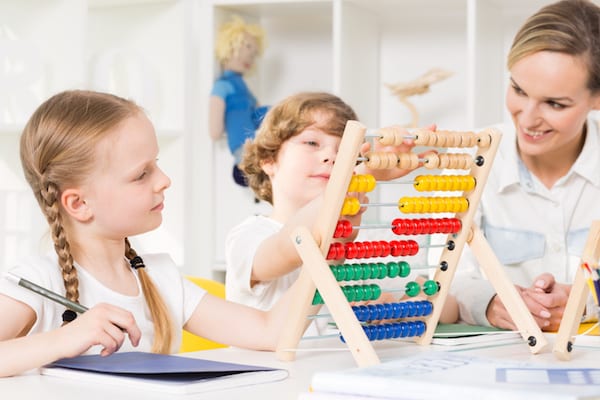 The task of counting may seem simple, but as Ann Carlyle and Brenda Mercado point out in Teaching Preschool and Kindergarten Math, (Math Solutions, 2012), there is an important distinction between the rote or automatic counting that young children start with, and the eventual formulation of a deeper cognitive connection to the meaning of the numbers and what those number words represent. Research shows us that the ability to simply recite numbers in sequence is followed later by a more complex understanding of these abstract symbols and their various attributes, as learners gain more familiarity with numbers and patterns.

Rote counting progresses into more meaningful comprehension and expression when young children can experience enjoyable and predictable routines that promote accuracy in number sequencing and that illustrate the way that numbers build and grow. Incorporating counting books, counting rhymes and songs, and counting plays or “play-acting” are all great ways to provide younger students with exciting opportunities to practice counting in the PreK-K classroom.

There are a multitude of wonderful children’s books that offer repeated counting opportunities in a context that young learners naturally gravitate toward–storytelling. The beloved Dr. Seuss classic, One Fish Two Fish and the many-versioned, delightful Over the Meadow are two examples of stories in which counting is inherent to the action of the tale, thereby giving listeners a reason to follow closely along and see the connection between the spoken numbers depicted in magical illustrations and in a plot, both of which bring significance to the numbers. Students at this young age are hard at work developing the ability to recognize the similarities and differences between objects, which in turn leads not only to counting, but to seeing patterns, such as repeating, growing, and shrinking patterns. The ability to then start making generalizations and predictions about numbers is seen when, for example, during recitation a story, students demonstrate that they can fill in the number words before the teacher reads them aloud.

Allowing students to create counting books of their own, perhaps incorporating a common theme for the entire class, will enhance this learning and creativity, while emphasizing numerals within a “real” context for children who are just beginning to count.

Rhythm, music, and specifically rhymes and songs geared toward young students are perfect for learning to count, in part because they lend themselves to movement, while being easy to remember due to the rhyming, as well as just plain fun for kids who no longer want to sit still. Rhymes and songs that involve finger counting reveal so much about the developmental stages of children, not only in terms of their fine motor skills, but in relation to how they represent the numbers in a song’s pattern by holding up and counting on their fingers. Some rhymes provide growing patterns of adding “one more”, while others, such as one noted in Teaching Preschool and Kindergarten Math called Five Little Ducks Went Out One Day, depict a shrinking pattern of “one less” as the rhyme progresses. Learning about patterns through such vivid songs and rhymes supports mathematical predictions and reasoning skills.

A third terrific classroom activity for incorporating counting, which even very young children are surprisingly drawn to, is that of acting out roles in a familiar story or fairy tale, turning it into a “play”. Classmates can take turns as the actors and as the audience members; both of which are learning experiences. Donning a simple costume of a hat, mask or vest, or holding a prop sometimes brings out the “ham” in even the shyest of the group.

Play is the “work” of early childhood, and play-acting is a great way to immerse PreK-K students in both language and in counting activities at the same time. Young children are masters at imaginary play, and guiding them through stories provides opportunities for observation, group participation, repetition, and practice, which can help to solidify comprehension and build confidence. Two well-known stories to turn into plays are The Three Little Pigs, and Goldilocks and the Three Bears. Try preparing a simple script that highlights the counting of the chairs, the bowls of porridge, and the beds we are all so familiar with in the Goldilocks story, as well as preparing basic props or identifiers, such as a paper face glued to a popsicle stick, to be held up by each actor who portrays one of the characters. Participating in these plays children become a part of the action, and really enjoy “thinking on their feet”.

Success in helping preschool and kindergarten students to develop a solid math foundation early on is now seen by researchers as a strong predictor of future classroom learning. Counting skills are a critical part of that foundation, and are challenging but rewarding to address in the classroom using these ideas, and many more. Stay tuned next time for suggestions on encouraging math talk in the PreK-K classroom! Treve Brinkman is devoted to building the capacity of both teachers and students in order to create classrooms where growth mindset, communication, and deep mathematical understanding are central. In the role of the Professional Learning Specialist, Treve supports districts’ professional learning for leaders and teachers through the facilitation of both whole group learning as well as individual coaching sessions.